Today BMW officially is taking the wraps off of a lightly disguised “concept” of the 2018 8 Series. The concept shows off heavily a revised brand design language that is much more dimensional than we’ve seen in the past. We expect the 8 Series to debut early next year and go onside next spring.

We’ll have much more on the new 8 Series in the coming days. Until then read on for the full release and for the first photos. 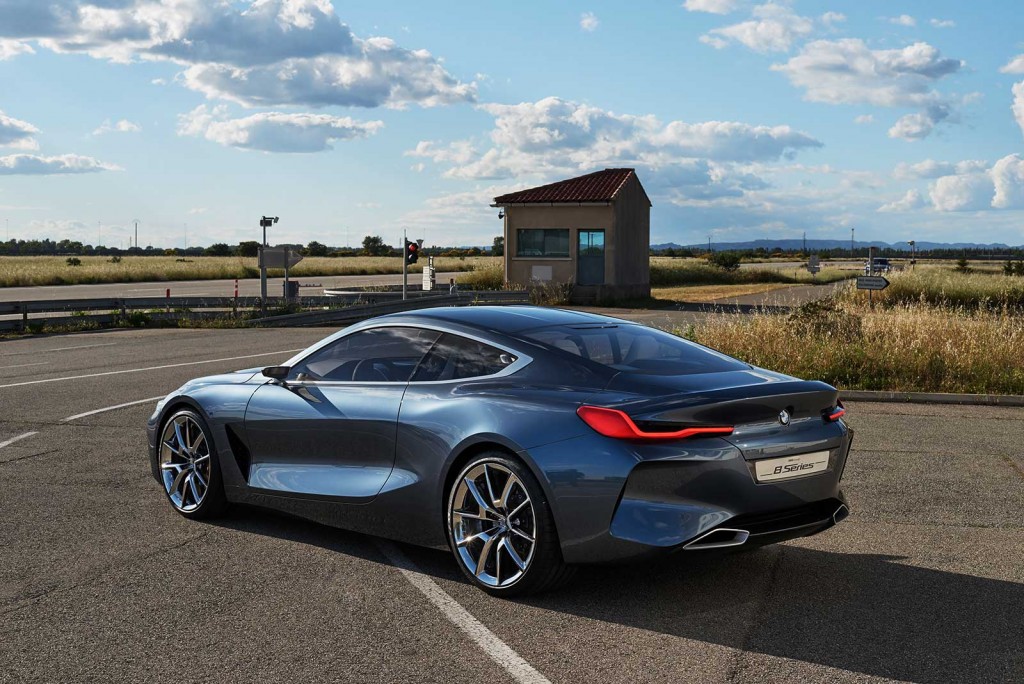 Official Release: The BMW Group is using this year’s Concorso d’Eleganza Villa d’Este to unveil the BMW Concept 8 Series, the essence of a modern-day BMW coupe wrapped up in an enthralling design study. The study car will serve as a taster of a forthcoming BMW model – the new BMW 8 Series Coupe, slated for launch in 2018 and part of the biggest model offensive in the company’s history. The NUMBER ONE > NEXT strategy sees the BMW Group aiming to significantly increase sales and revenues in the luxury class, and the BMW 8 Series Coupe plays an important role here. “The number 8 has always represented the pinnacle of sports performance and exclusivity at BMW,” explains Chairman of the Board of Management of BMW AG Harald Krüger. “The forthcoming BMW 8 Series Coupe will demonstrate that razor-sharp dynamics and modern luxury can go hand-in-hand. This will be the next model in the expansion of our luxury-car offering and will raise the benchmark for coupes in the segment. In the process, we will strengthen our claim to leadership in the luxury class.” 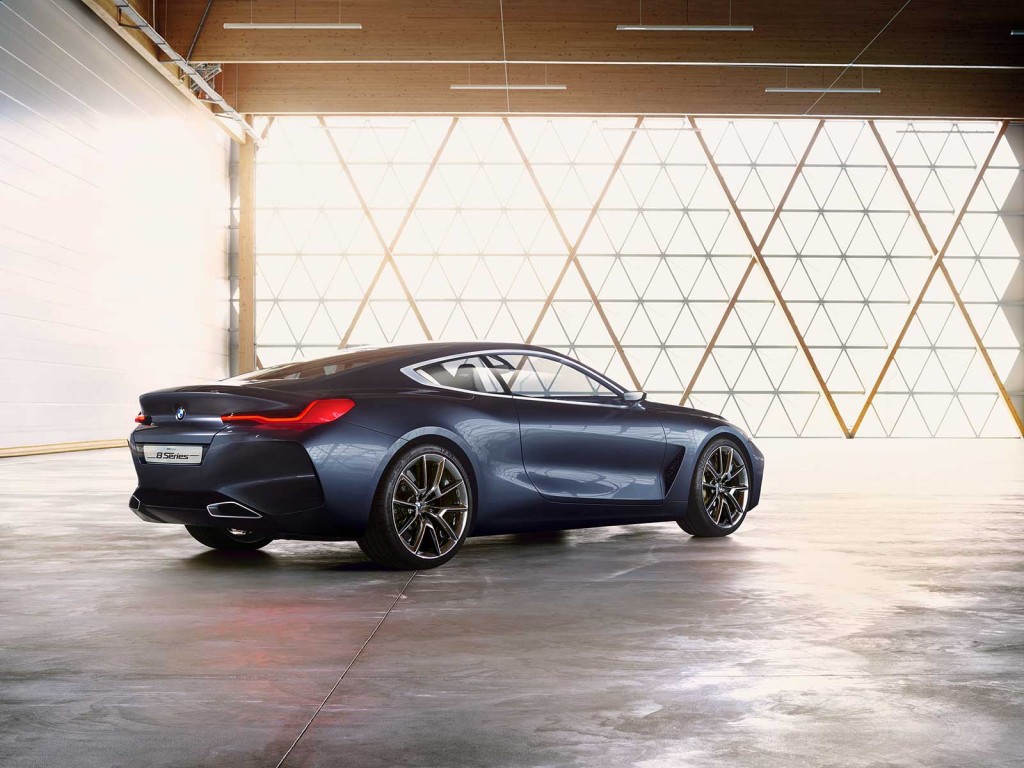 The BMW Concept 8 Series reveals much of what is to come. “The BMW Concept 8 Series is our take on a full-blooded high-end driving machine,” says Adrian van Hooydonk, Senior Vice President BMW Group Design. “It is a luxurious sports car which embodies both unadulterated dynamics and modern luxury like arguably no other. For me, it’s a slice of pure automotive fascination.”

The exterior brings together the past and the future.

The BMW Concept 8 Series is immediately recognisable as a BMW, but also displays new design ideas and form-building techniques. “The design of the BMW Concept 8 Series provides a fresh interpretation of iconic BMW styling cues,” adds van Hooydonk. “And it also showcases a new approach to the use of forms which is reflected particularly prominently in the car’s surfacing. A handful of crisp lines mark out clear surfaces, and the car’s volumes are powerfully sculpted. Together, these elements make a forceful statement and create a model brimming with character. In short, this is a driver’s car.” 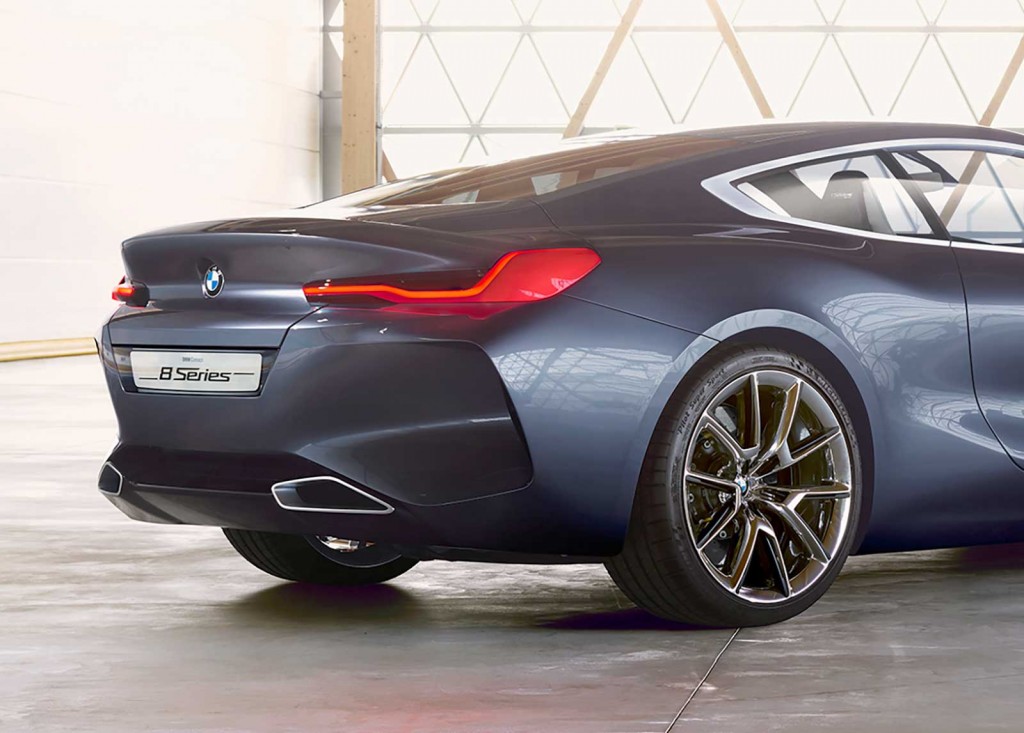 The flanks: expansive surfaces set within a sporting outline.

The silhouette of the BMW Concept 8 Series spreads low and powerfully over the road. The interplay of a long bonnet and flowing roofline bring dynamic allure to the car’s flanks, while the striking upward sweep of the concept’s trailing edge provides a crisp conclusion to the car’s rearward flow and adds another sporting flourish.
Within the car’s silhouette, the refreshingly clean yet also dramatic arrangement of surfaces and forms catches the eye and creates a crisp, modern look. The sharply drawn lines coursing over taut volumes represent a visual promise of the vividly dynamic driving experience that awaits.

A look at the details reveals two expressively styled character lines providing the border for surfacing that appears to be formed by air rushing out of the Air Breathers. Further back, the eye is guided to the pronounced flaring above the rear wheels. The flanks as a whole draw attention to a new aspect of BMW’s expertise in the execution of surfaces. Skilfully moulded line sources and flowing highlights accentuate the athletic contours of the BMW Concept 8 Series. And the exclusively developed exterior paint finish Barcelona Grey Liquid – a greyish- blue with highly iridescent pigments – shows off the surfacing to optimum effect. Large (21-inch) light-alloy wheels feature a sporty and exclusive multi-spoke design and aero elements, generate visual depth and set the seal of the compelling appearance of the car when viewed in profile. 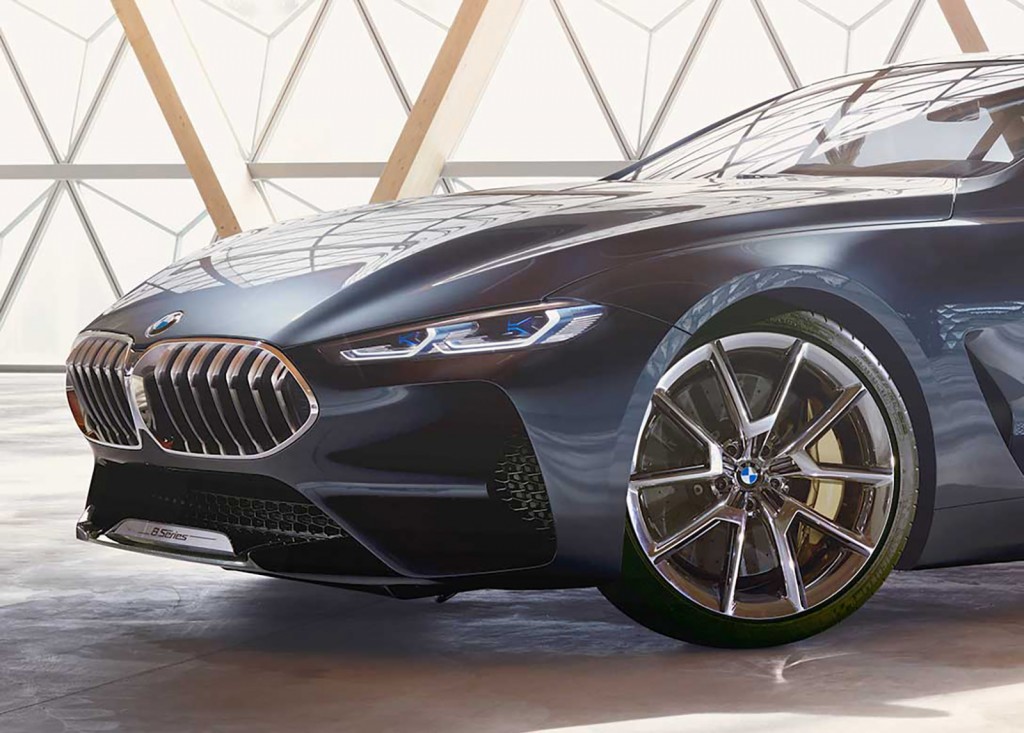 A large kidney grille, slim twin headlights and large air intakes form a striking, sporty front-end graphic. The classic BMW template has a fresh interpretation here, taking the company’s design language in a different direction. For example, the two kidneys are very low to the road and spread broadly across the front end. Taking inspiration from BMW coupes of years past, the kidneys are brought together by an unbroken frame to form a single large element. The grille widens as it extends downwards, emphasising the dynamic character of the BMW Concept 8 Series. Together with super-slim laser headlights and the hexagonal take on the “twin circular” theme, it brings a focused look to the front end.

The large side air intakes in the front apron intensify the car’s wide, sporting stance on the road and promise a very pure dynamic experience. The carbon-fibre element between them underlines the car’s sporty, high-performance character. 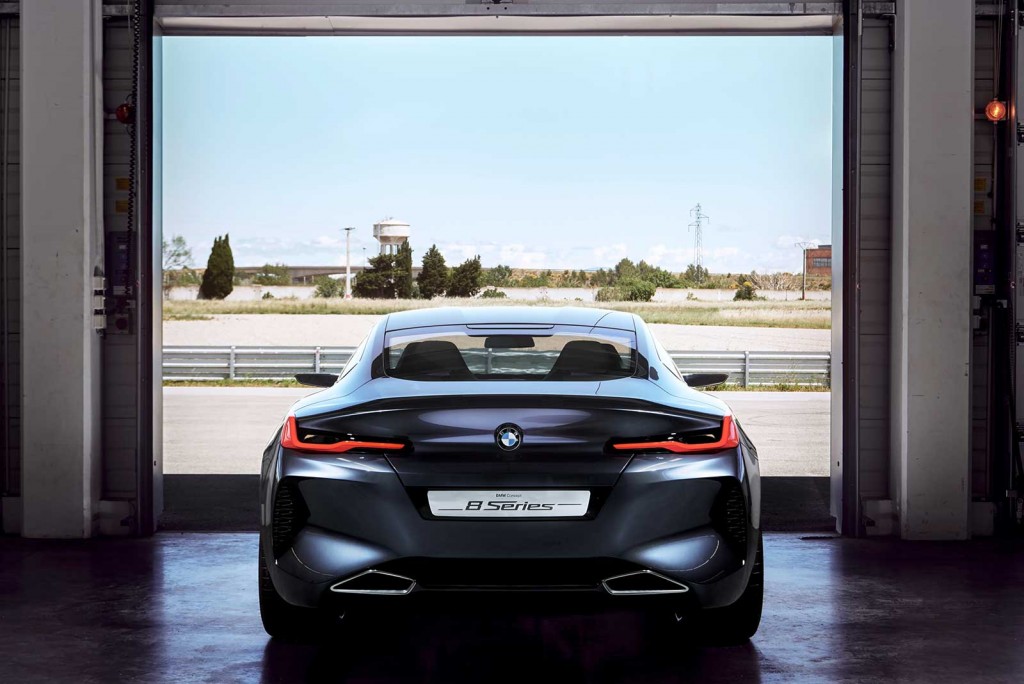 The rear: bold and modern.

Emotional surfacing also dominates at the rear of the BMW Concept 8 Series, creating a low, highly sculpted tail with maximum width-enhancing effect. The rear is defined by the interplay between volumes and lines, which extend around from the flanks and shape the rear section of the car. The powerful wheel arches hint at the car’s dynamic talents and advertise its rear-wheel drive. And the tapering of the passenger cell and the car’s wide track shine a particularly vivid spotlight on this area of the car.

The slim, stretched-out rear lights extend far into the sides of the car and provide a connection between the rear and flanks. The lights themselves take the form of L-shaped blades and project out from the rear. They emphasise the width of the car and its muscular stance on the road, and their slender form gives the rear an ultra-sporty and modern flavour.

The dark, stylised carbon-fibre diffuser in the lower section of the rear apron adds extra lightness and a sportier feel to the rear graphic. Large, trapezoidal exhaust tailpipes frame the rear section and point to the dynamic driving experience to come.

The interior: an emotionally rich blend of dynamics and luxury.

The interior focuses on the essential: the task of driving. Once behind the wheel, the driver is wrapped in the tightly enclosed ambience typical of sports cars. The surfaces and lines all gravitate forwards and underscore the dynamic driving experience. The grouping of functions into control clusters, e.g. in the centre stack, the centre console and the doors, gives the interior a clear graphic structure.

Among the standout design elements in the interior are the fluid transition from the instrument panel into the doors and the sporty, enveloping feel of the interior. This impression is magnified by the smooth connection between the centre console and instrument panel, which together form the nucleus of the interior. The high centre console and the instrument panel’s low visual focus add further emphasis to the snug and sporty feeling of space.
The interior of the BMW Concept 8 Series actively explores the contrasts between emotion and engineering, dynamic flair and luxury; its form suggests supreme sportiness, while exquisite materials exude exclusivity and high-grade design. For example, all of the driver’s contact points with the car are brimming with sporting character. The exclusive sports seats are slim in design, the carbon- fibre shell providing the basic structure and the finest leather making them the perfect place to sit. The steering wheel continues along similar lines, its hand- polished aluminium spokes arrowing forward purposefully, and the red-anodised shift paddles bring the race track to mind. The contrast of aluminium and dark leather on the gripping surfaces emphasises this luxurious sense of sportiness in various details.

Merino leather in Dark Brown and Fjord White lends the interior a high-quality ambience. Accent surfaces in carbon fibre and hand-polished aluminium create deliberate contrasts and radiate a sporty and technical feel. Plus, a faceted ground gearshift lever and the iDrive Controller made from Swarovski glass with a smoky quartz look treat the interior to some modern and classy finishing touches.

The BMW Concept 8 Series is a preview of a model which BMW is set to introduce in a similar form in the coming year. The BMW 8 Series Coupe will build on the company’s successful tradition of luxurious sports cars and adds another exciting model – a genuine dream car – to its existing luxury-class line-up.