Official Release: Innovative high-performance cars for safety at the highest level of motorcycle racing: the BMW M GmbH has remained true to this principle throughout nearly 20 years of partnership with the MotoGP organizer Dorna Sports, and as the “Official Car of MotoGP”. That is especially true of the new BMW M5 MotoGP Safety Car, which the company from Munich is presenting as the next highlight in the Safety Car fleet. The new course car is based on the high-performance sedan BMW M5 (combined consumption: 10.5 l/100 km; combined CO2 emissions: 241 g/km), which was showcased to the global public for the first time in August. The new BMW M5 MotoGP Safety Car will debut at the MotoGP season finale in Valencia, Spain (10th to 12th November) and will speerhead the Safety Car fleet in the 2018 season. 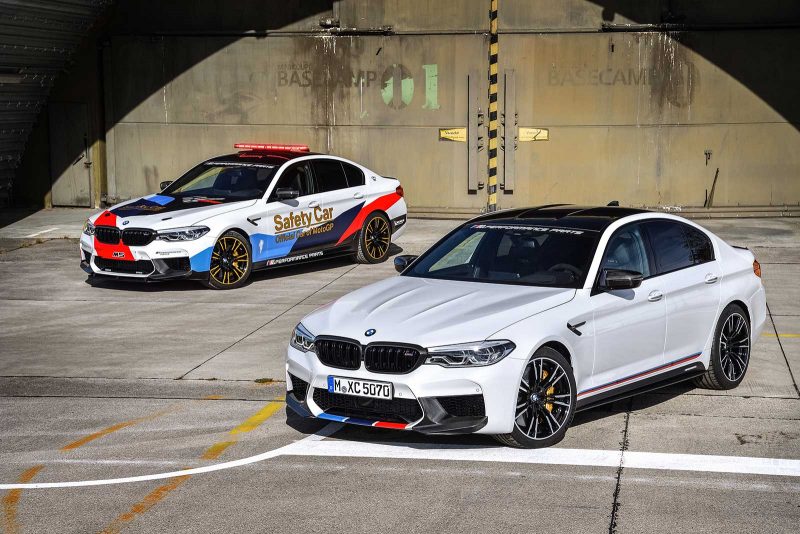 “A MotoGP Safety Car faces enormous challenges. It is vital to lead a field of unique, high-performance race prototypes safely through all sorts of conditions,” said Frank van Meel, President of BMW M GmbH. “Innovative motorsport technology is an essential part of this. The new BMW M5 forms the perfect basis for a safety car, as its technical features ensure perfect handling, even at the limits of driving dynamics – on the road and on the racetrack. Development never stands still in MotoGP, which is always pushing its limits further and further. The same is true for the BMW M GmbH – and the new M5 MotoGP Safety Car is an outstanding example of our pursuit of innovation and maximum levels of performance.” 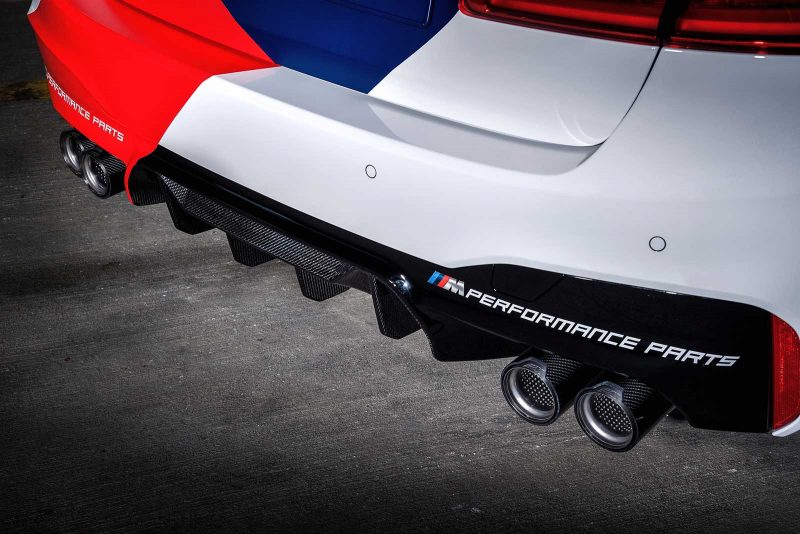 The features in question include the newly-developed M-specific all-wheel drive M xDrive, which is being used in the BMW M5 for the first time. With precise handling and perfect traction, this guarantees optimised driving dynamics in all manner of situations. The heart of the BMW M5, the 4.4-litre V8 engine with M TwinPower Turbo technology, has been completely overhauled by the M engineers. It represents another significant increase in performance compared to previous models, with 441 kW/600 HP and maximum torque of 750 Nm in the production M5. The new BMW M5 only needs 3.4 seconds to accelerate from 0 to 100 km/h. Transmission is provided by the new eight-speed M Steptronic gearbox with Drivelogic. The chassis contains M-specific kinematics and elastokinematics elements that contribute to optimised driving dynamics. The weight also plays an important role in performance. This has been reduced further through features such as the lightweight carbon fibre-reinforced plastic (CFRP) roof. 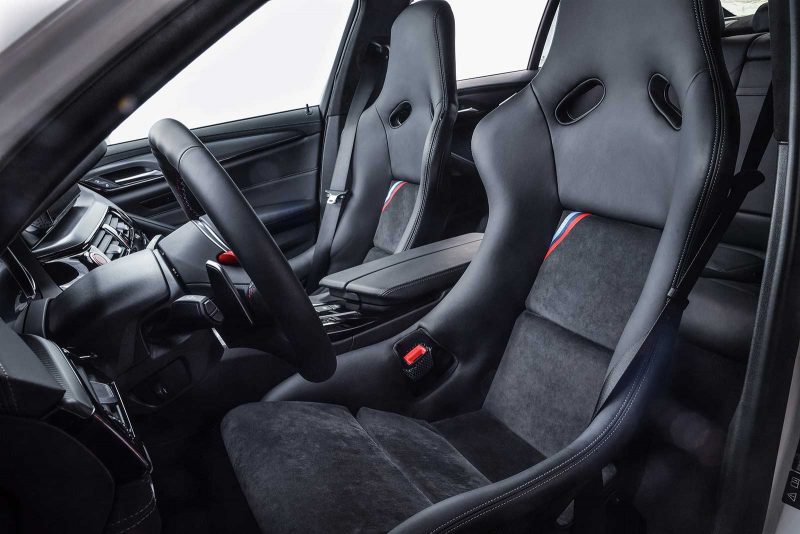 Painstaking manual work at the BMW M Manufaktur in Garching converted the high-performance base car into the BMW M5 MotoGP Safety Car, preparing it to appear as the course car in the world’s fastest motorcycle racing series. This process included the addition of numerous BMW M Performance Parts, many of which are available as retrofit parts for the BMW M5 production model. These emphasise the sporty appearance of the Safety Car and meet all the functional requirements for aerodynamics, cooling and lightweight construction. These include various carbon components such as side sills, rear diffusor, rear spoiler, front kidney grille, door mirror caps and air breather slats. The BMW M Performance sport exhaust system is made of titanium, with carbon exhaust tips, and has been designed specially for use on the racetrack. 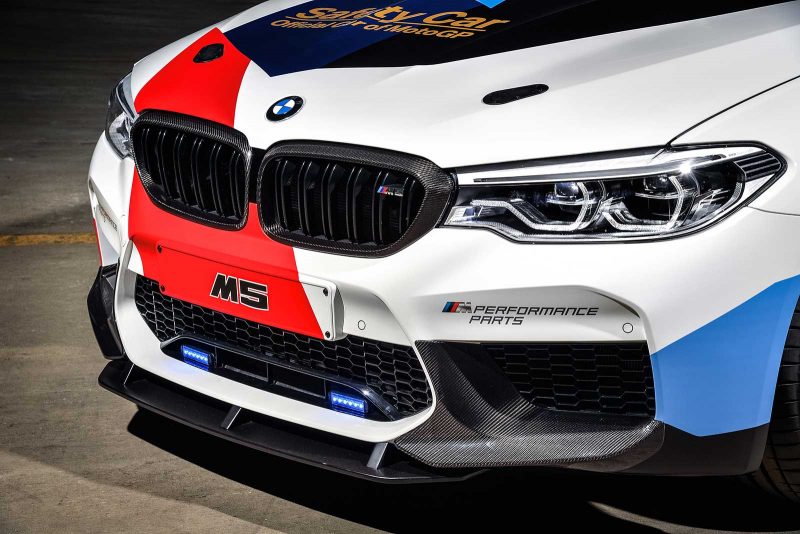 The transformation of the BMW M5 to a MotoGP Safety Car was completed by the inclusion of special racing features and the necessary safety equipment. The front splitter is a prototype developed specifically for the BMW M5 MotoGP Safety Car. The bonnet latches are taken directly from racing. The bucket seats from the BMW M4 GTS guarantee a combination of comfort and maximum security for their occupants when being in action on the racetrack. The flat light bar on the roof uses modern LED technology. It is controlled via a specially-developed cockpit panel. Another important signalling system is provided by the flashing front lights, consisting of blue LED lamps in the front grills and flashing corona rings for the headlamps.

The partnership between the BMW M GmbH and Dorna Sports dates back to 1999. The provision of the BMW M fleet is the core of the involvement as “Official Car of MotoGP”. There are also a host of other activities. The BMW M Award for the best MotoGP qualifier has been presented at the end of every season since 2003. The BMW M MotoGP Experience gives visitors the chance to experience the MotoGP at first hand. The BMW M MotoGP experts give them exclusive insights. On selected Grand Prix weekends, the BMW M GmbH presents its newest models and products in on-site actions.

Worldwide BMW Sales up 5.2% for the Year

The Next Generation M5 Hits the Nurburgring