The BMW M2 is our current favorite go fast BMW. But what happens if you added every conceivable M Performance part to an an already great car? We recently found out at BMW’s Performance Center West where we had said unicorn and an empty track at our disposal.

M Performance suspension, bigger brakes and exhaust? Check. M Performance aero bits? Check. Interior alcantara? Check. This is the M Performance catalog brought to life in M2 form and it looks exactly how you’d want it to – serious and fast. 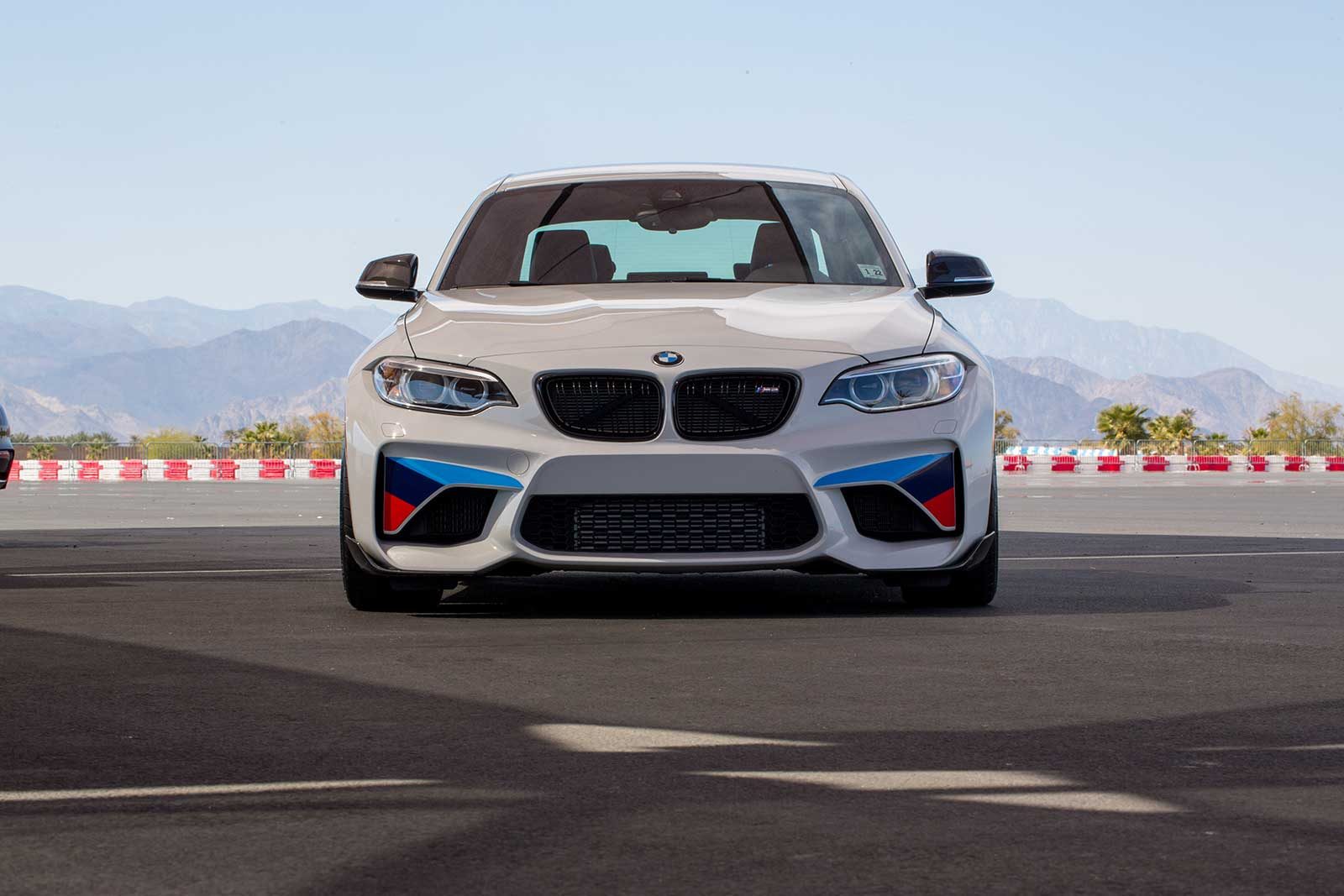 First impressions – this is a wicked little car. The front coil-overs give the car a better stance upfront and allow the 19” wheels to perfect feel the wells. The brake difference is subtle but nonetheless impressive if you know the standard car. And those stickers? They might be a bit much for a daily but they’re much more subdued then previous versions.

Inside it looks as if a couple alcantara cows were sacrificed to the M Gods. There’s the soft stuff everywhere from the M Performance steering wheel to the dash trim. That said everything is fairly restrained in design same the M Performance shift knob (which I could take or leave). 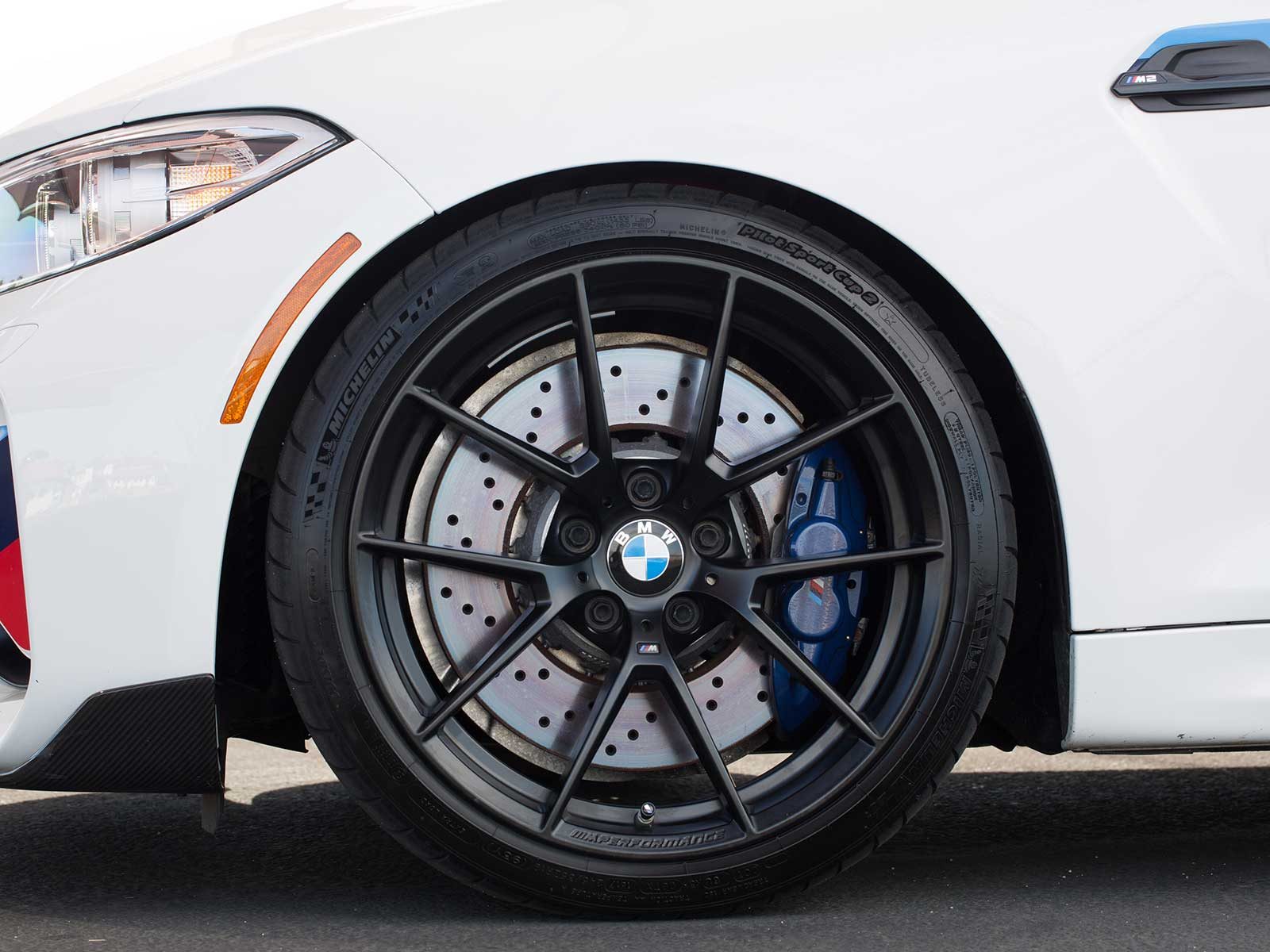 Beyond all the M Performance goodness this car also has a trick up its wheel wells in the form of Michelin Sport Cup 2 tires. They not only improve grip dramatically but save eight lbs in unsprung weight.

Enough about the look of this thing. It’s magic lies behind the start button.

From the moment you fire up the modified N55 inline six, your experience is dominated by the M Performance exhaust. With the loud button pressed (which opens a Bluetooth controlled baffle) the N55 sounds better than it ever has. There’s no power increase in paper but the sound alone feels like it gives you 20 hp. 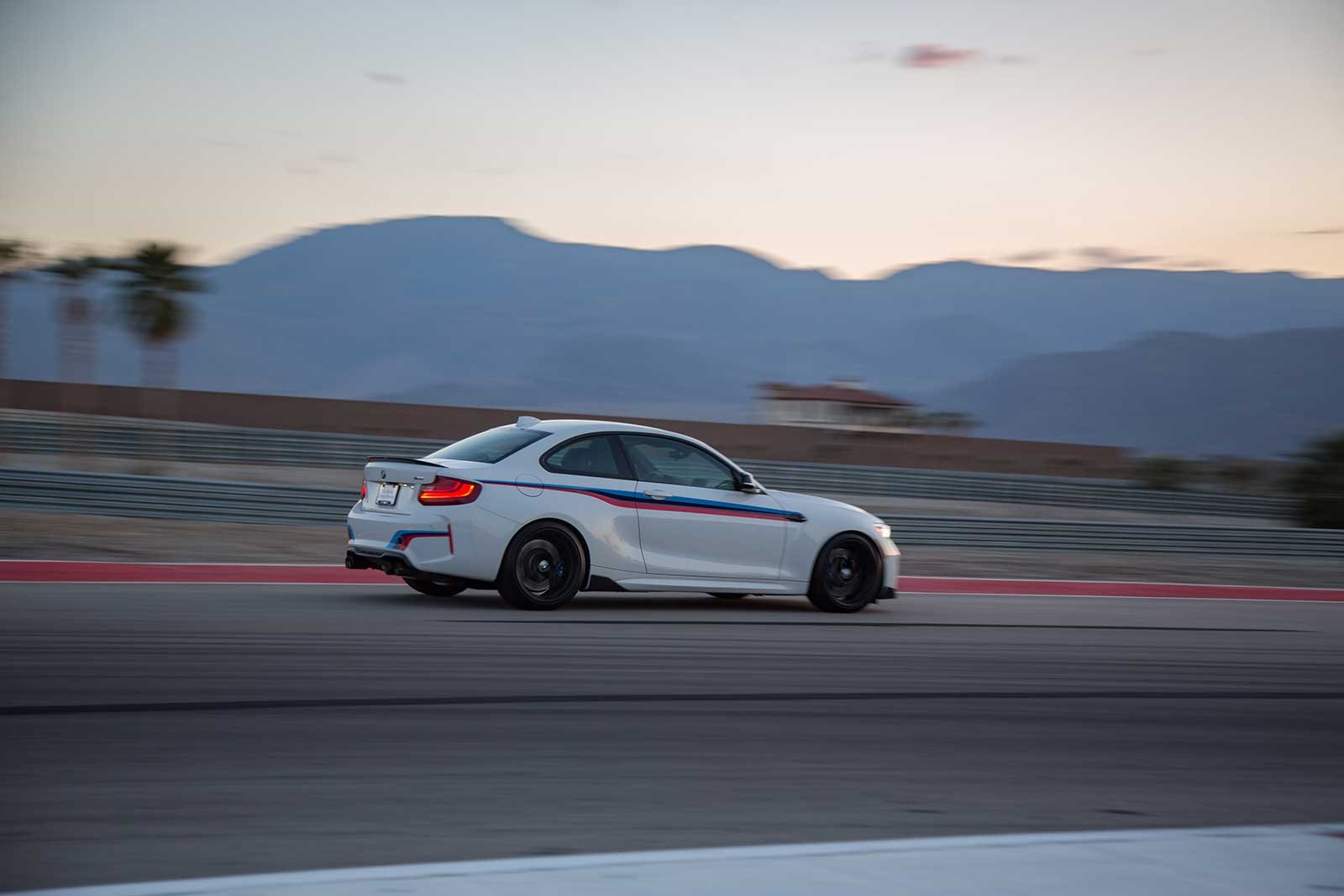 As we got fully warmed up on the track it was time for the Sport Cup tires and coil-overs to perform their magic. Not only is this M2 more eager and controllable at the limit with these modifications, that limit is absurdly high. The combination of the chassis improvements and the tires allow for crisp and quick corners and consistently fast lap times. Above all else these modifications allow the driver to brake later into corners and exit far quicker than the standard M2.

The brakes are less of a dramatic improvement but performed confidently and consistently – even after quite a few hot laps. 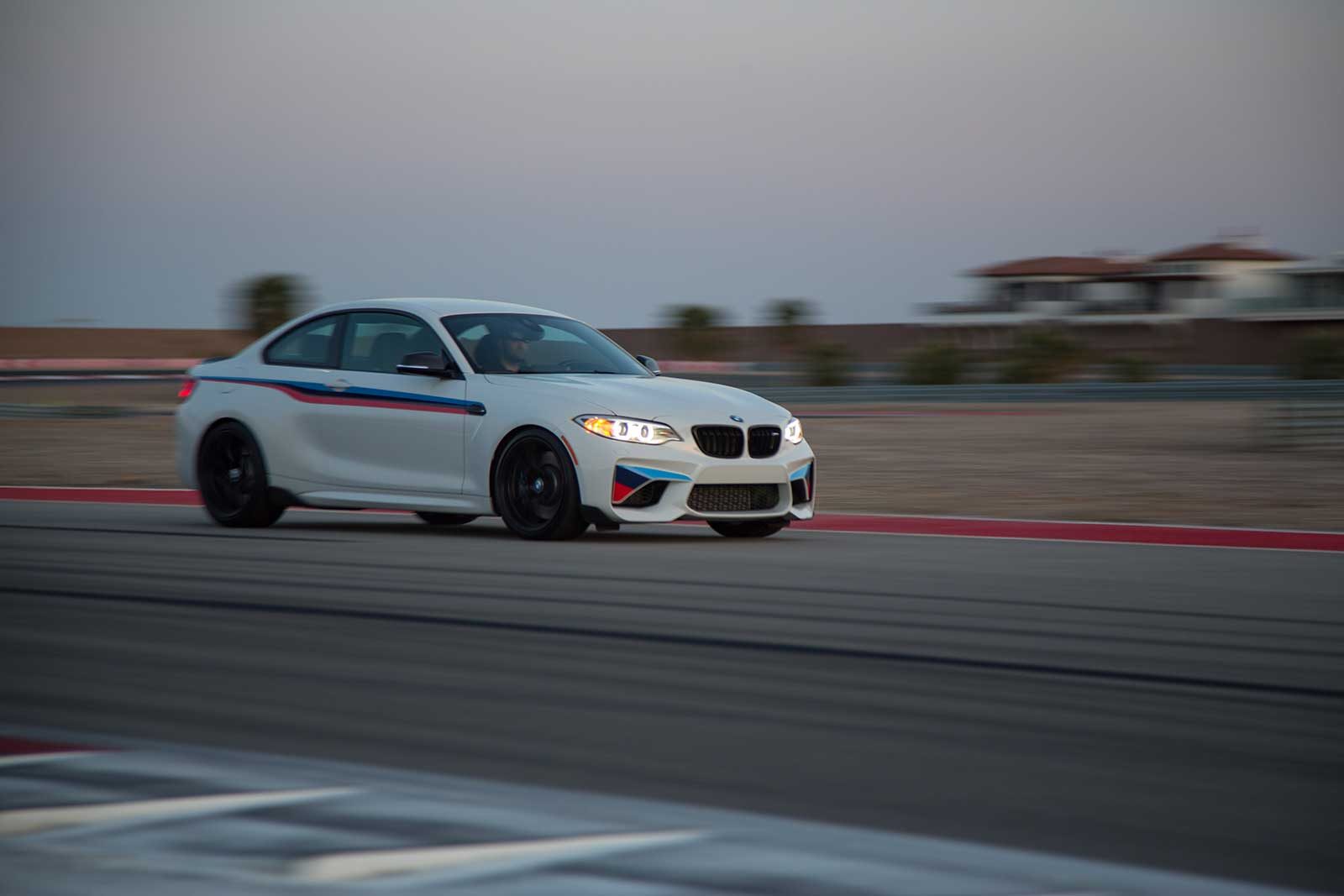 As much as these modifications shine individually, it was the not thing that comes standard on the car that dominated the experiences – the six-speed manual transmission. While that choice may make the car a tenth or two slower to 60, it made the M2 more involving and ultimately enjoyable lap after lap.

There’s plenty who say they prefer a DCT at the track and I can respect that rational. But the satisfaction of a perfect heel-to-toe into a corner is simply not found with a DCT. With the limits so high and this M2 so buttoned down by its suspension, I could better focus on shift points and execution.

With the M2 Competition around the corner it’s worth remembering just how good the standard M2 is. And with these M Performance parts added, it’s a car that goes from involving and enjoyable to absolutely thrilling. Will it be as thrilling as 405 hp with updated suspension? Without having driven the new M2 Competition it’s hard to tell. But I can’t imagine the Competition having the same feeling as these coil-overs or sound this aggressive from the factory. 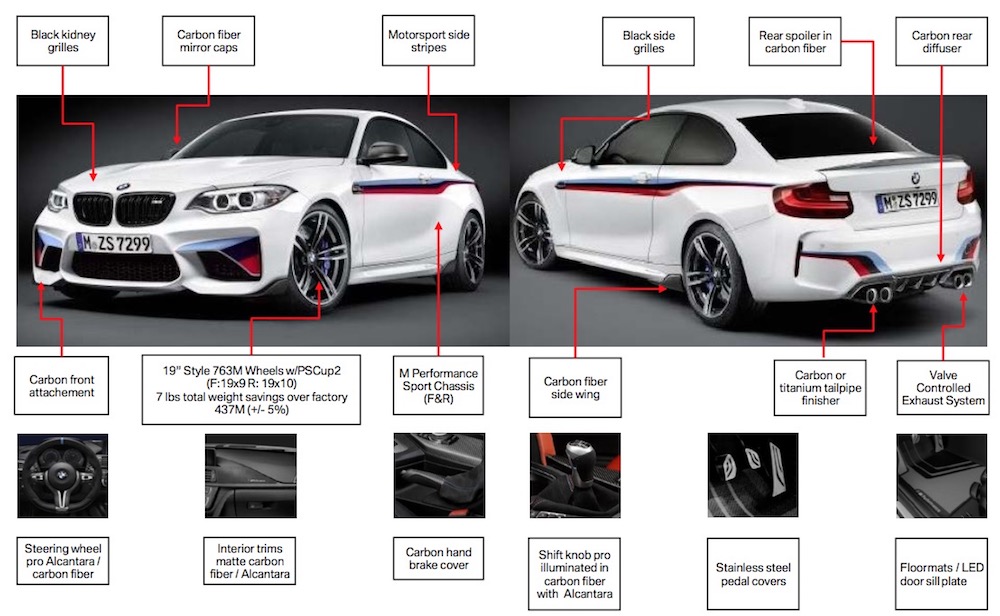 Which M2 M Performance Accessories Would We Buy?

The M2 has always been a great car M car. But the M Performance accessories take it to the next level in terms of performance and (more importantly) driver satisfaction. But unfortunately they’re far from free. The exhaust system retails for $2,000 before installation and interior alacatara and M Performance steering wheel add another $1,200. The exterior carbon and exterior stripes are over $1,900 and the mandatory (in our opinion) Style 763M wheels with the SportCup2 tires are (gulp) $5,500. Perhaps the most important upgrade, the coil-overs are $2,700. All in we’re looking at over $13,000 in upgrades on the car that we tested. Which begs the question – are they all really worth it? 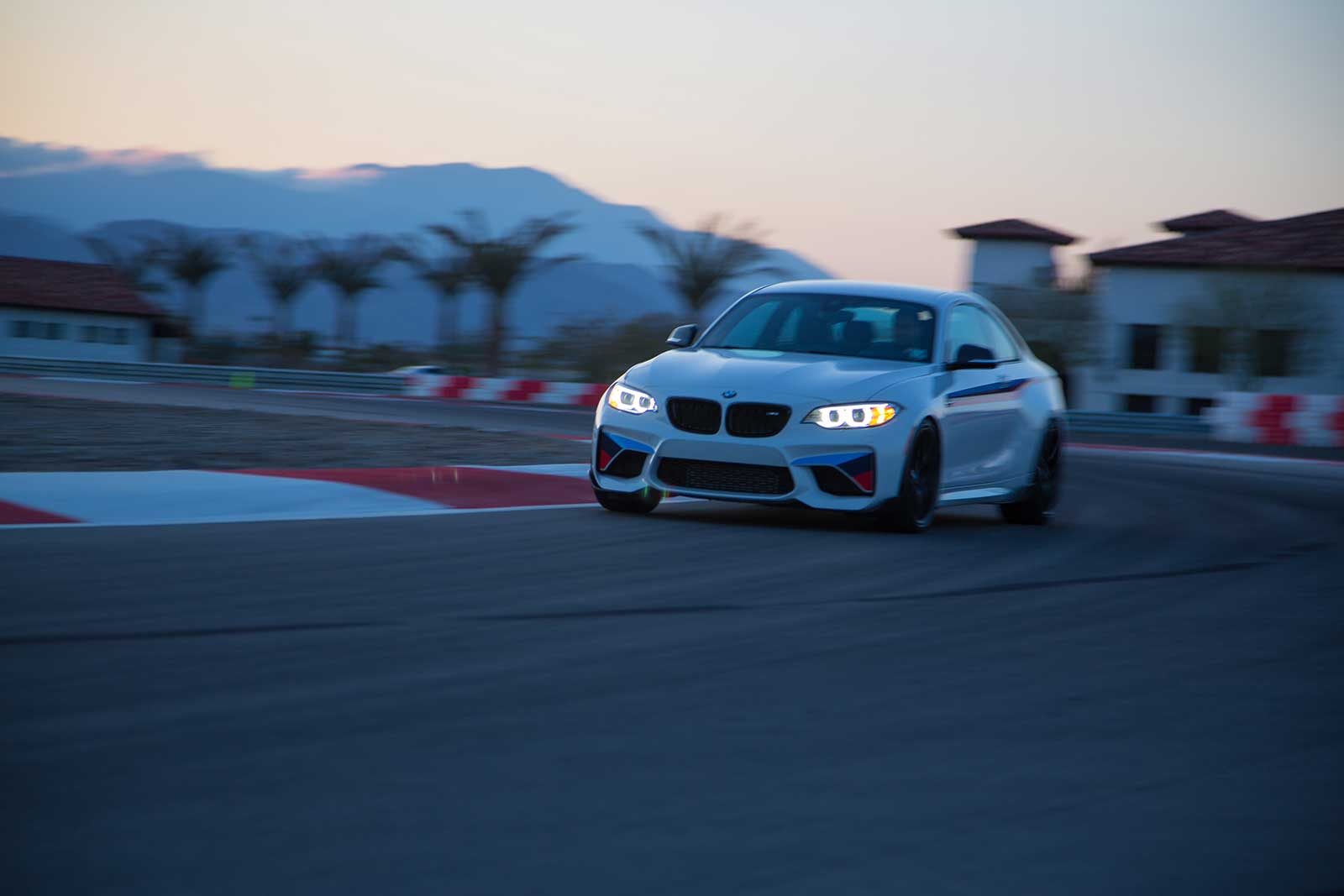 We’d forgo the stripes despite the fact that they’ve gotten quite a bit better from previous generations. We’d also not touch the interior and focus on performance. Which leads us to three critical options in our opinion – Coil-overs, 763 19” wheels with Sport Cup 2 tires and the M Performance exhaust. It’s $10k in accessories that can be rolled into financing and has the full BMW factory warranty. Crucially these are also additions that the M2 Competition don’t have an answer for.

Dusk on a race track is a good time to get philosophical. Do M Performance parts really make a difference? Are they worth the money? In our time with this fully decked-out M2 the answer is yes and resoundingly yes. But more importantly they feel worth it given performance, quality and provenance. Designed and engineered to the same standards as any other M component, these accessories don’t feel like accessories. They just feel like part of a very special M2.