The BMW Vision iNEXT is a blueprint for the brand’s future. And if you listen to BMW executives explain the car, it’s the brand’s “iPhone moment” – a product that defines a new era for the brand. But this is a product that is more than a vehicle alone. The BMW Vision iNEXT (yes the name is a struggle) represents future BMW strategies encompassing technology, design and new ways of thinking. As we speak the thinking we see in this concept are filtering across the company and its brands. In other words, no concept in recent memory will liklely have more input into BMWs and MINIs future products.

Mobility is an intrinsic part of our lives, our experiences, our sensory beings. It is, in short, a basic human requirement. Consequently, deliberations about the future of mobility revolve more than ever around people, our emotions and our mobility needs and preferences. The possibilities offered by autonomous driving, electrification and ever-greater connectivity will in future open the door to completely new experiences and ways of shaping a journey by car. At the same time, they also promise to change our desires and lifestyle habits.

A boutique ambience on wheels.

Drivers will have ever greater freedom to decide how they wish to use the time spent travelling in a car. The design of the vehicle’s interior will become increasingly important, with the feel-good factor playing a more prominent role. The all-electric BMW Vision iNEXT has therefore been created as a mobile space that offers real quality of life and addresses the need for a new “favourite space” in which we can be ourselves and relax. The resultant design exudes emotional appeal and conveys a positive sensation when entering the vehicle. 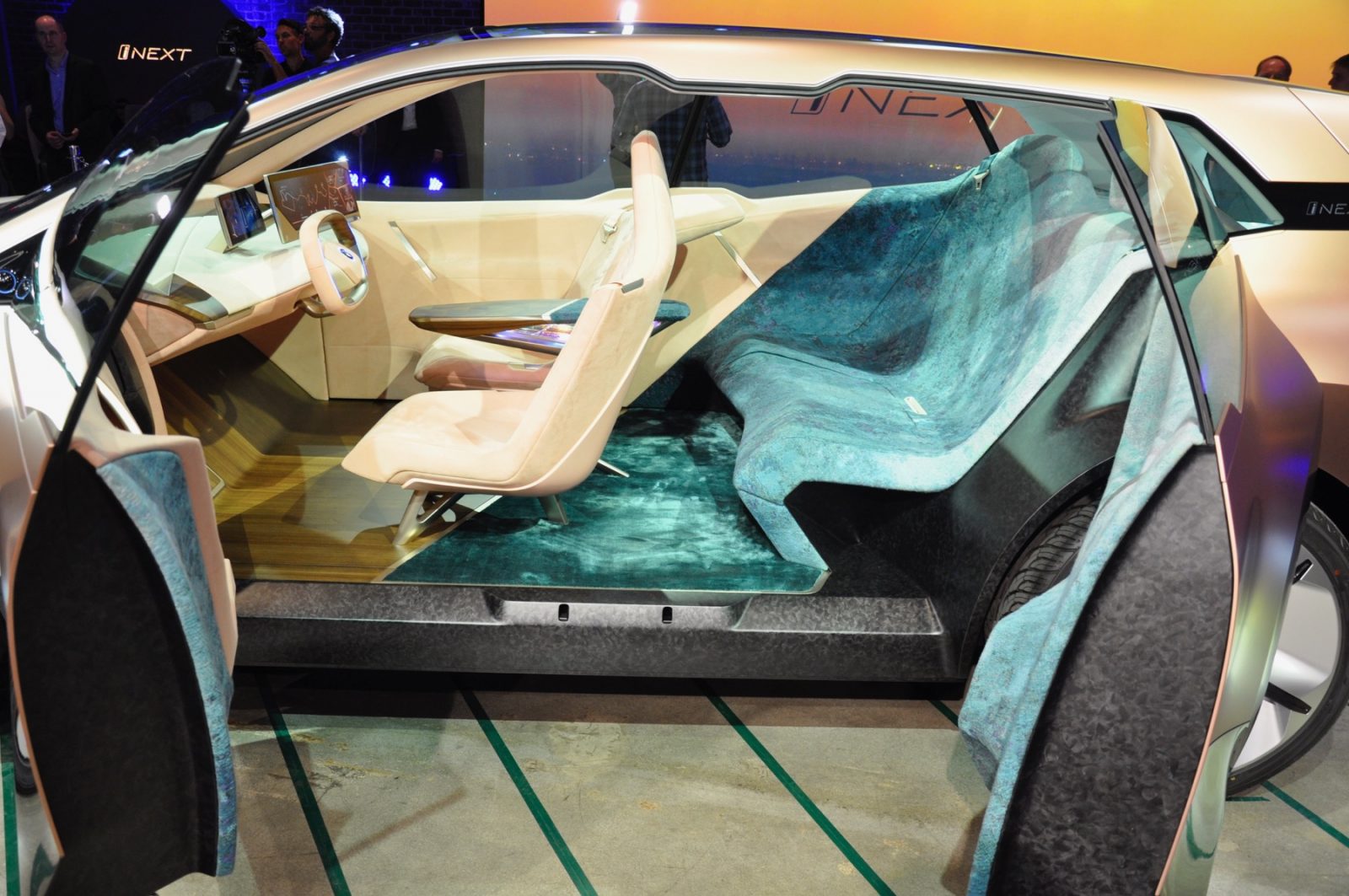 The geometry of the iNEXT cabin is composed of just a few, clean-cut lines, placing the focus on materials and colours. A mix of cloth and wood creates the kind of sophisticated feel associated with furniture design, helping to give the interior its special “boutique” character. The inside of the car is awash with warm, welcoming colours, such as the nude shade Purus Rosé, Brown and Beige, while the shimmering metallic Mystic Bronze accentuates their effect. The rear compartment is dominated by the petrol-coloured Enlighted Cloudburst cloth upholstery with its intricate Jacquard weave, which runs asymmetrically across the seat area and extends into the side panelling and parcel shelf.

Smart technology – integrated out of sight.

Smart technologies will help people in an ever more unobtrusive way in the future. In the BMW Vision iNEXT, these technologies stay in the background and out of sight – hence the name Shy Tech – and are only deployed when needed or at the driver’s or passengers’ request. There is virtually no need for either screens or buttons. Functions can be operated using surfaces made of materials such as wood or cloth, like the Jacquard cloth upholstery in the BMW Vision iNEXT. Control of the vehicle is therefore tailored in every respect to the requirements of the people travelling in it.

The exterior: precision and clarity.

The exterior of the BMW Vision iNEXT is also brimming with innovations. The new BMW i design language is clearly visible with its striking lines and clear forms, including powerfully sculpted surfaces curved like muscles onto the flanks. The stunning Liquid Greyrose Copper paint finish, which gradually changes in shade from warm copper to dark rose, projects unbridled dynamism and gives the exterior still greater impact. 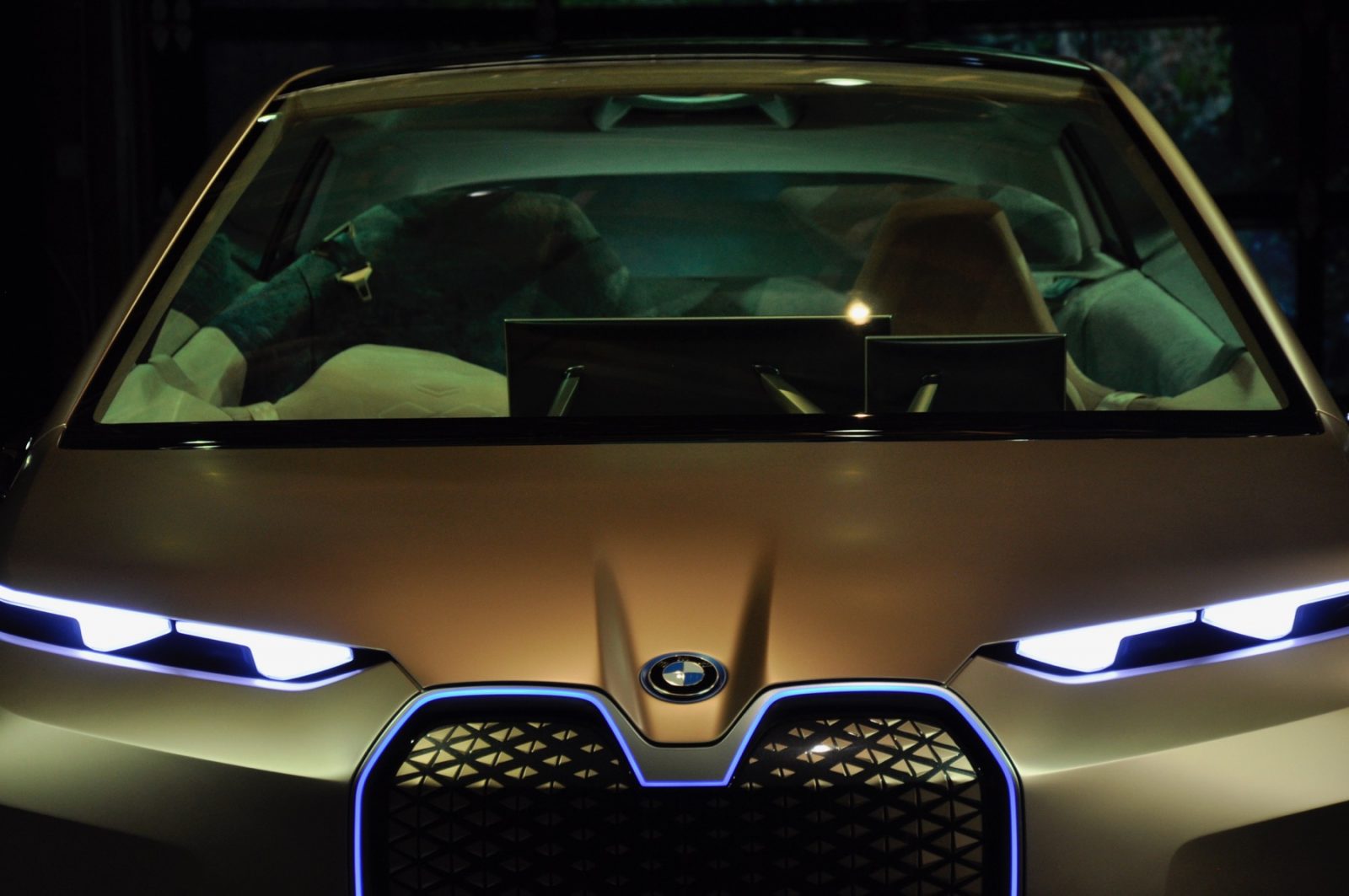 The BMW Vision iNEXT features a very modern take on the classical BMW four-eyed front end, complete with super-slender headlights, while cameras (rather than exterior mirrors) show what’s happening behind. The windscreen merges seamlessly into a large panoramic roof, providing a clear view of the car’s innovative interior.

At the rear, the horizontal lines and surfaces create a wide and dynamic stance, and the slim rear lights cut deep into the car’s tail. The air flows along the roof of the BMW Vision iNEXT all the way to its trailing edge, and this combines with a diffuser – illuminated for extra effect – to enhance the car’s aerodynamics. The diffuser is an attractive styling element and a highly functional one, too: besides its positive influence over the Vision Car’s aerodynamics, it also increases electric range. Taking its cue from racing cars, the diffuser adds to the sporting presence for which BMWs are renowned – without a single exhaust tailpipe in sight. 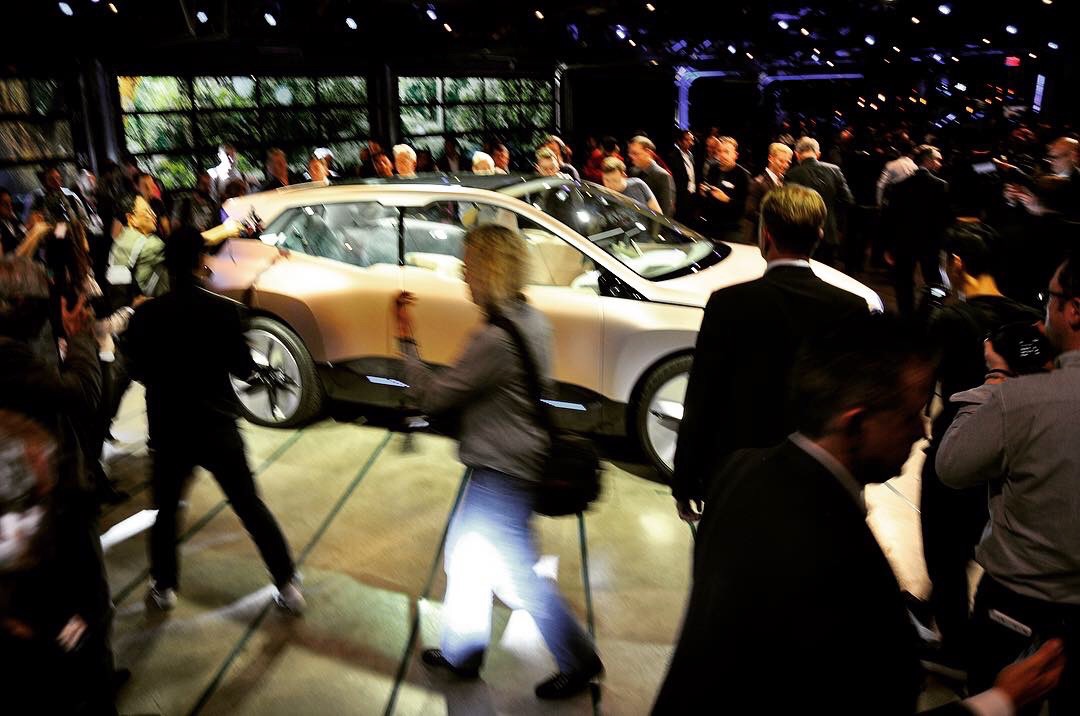 The BMW Vision iNEXT is celebrating its world premiere at the Los Angeles Auto Show 2018. The BMW Group’s Vision Car will herald the beginning of a new era in driving pleasure and mark the next step in the Munich-based company’s ongoing model offensive. The BMW iNEXT production model will roll off the assembly line at Plant Dingolfing from 2021, the new technological flagship transporting the company’s strategic innovation fields (D+ACES) onto the road.

BMW at the LA Autoshow

The BMW i8: Launch Photo Gallery