This is the one. Those were the words I kept uttering lap after lap as I attacked the Thermal Race Club’s south track with the BMW M2 Competition. It was just a year ago when I drove a well sorted (shod with all sorts of M accessories) M2 around this same track. But now I was behind the wheel of the revised M2 Competition complete with the M4’s twin turbo 415 hp inline six and every M accessories in the catalog. Yup, this is the one. 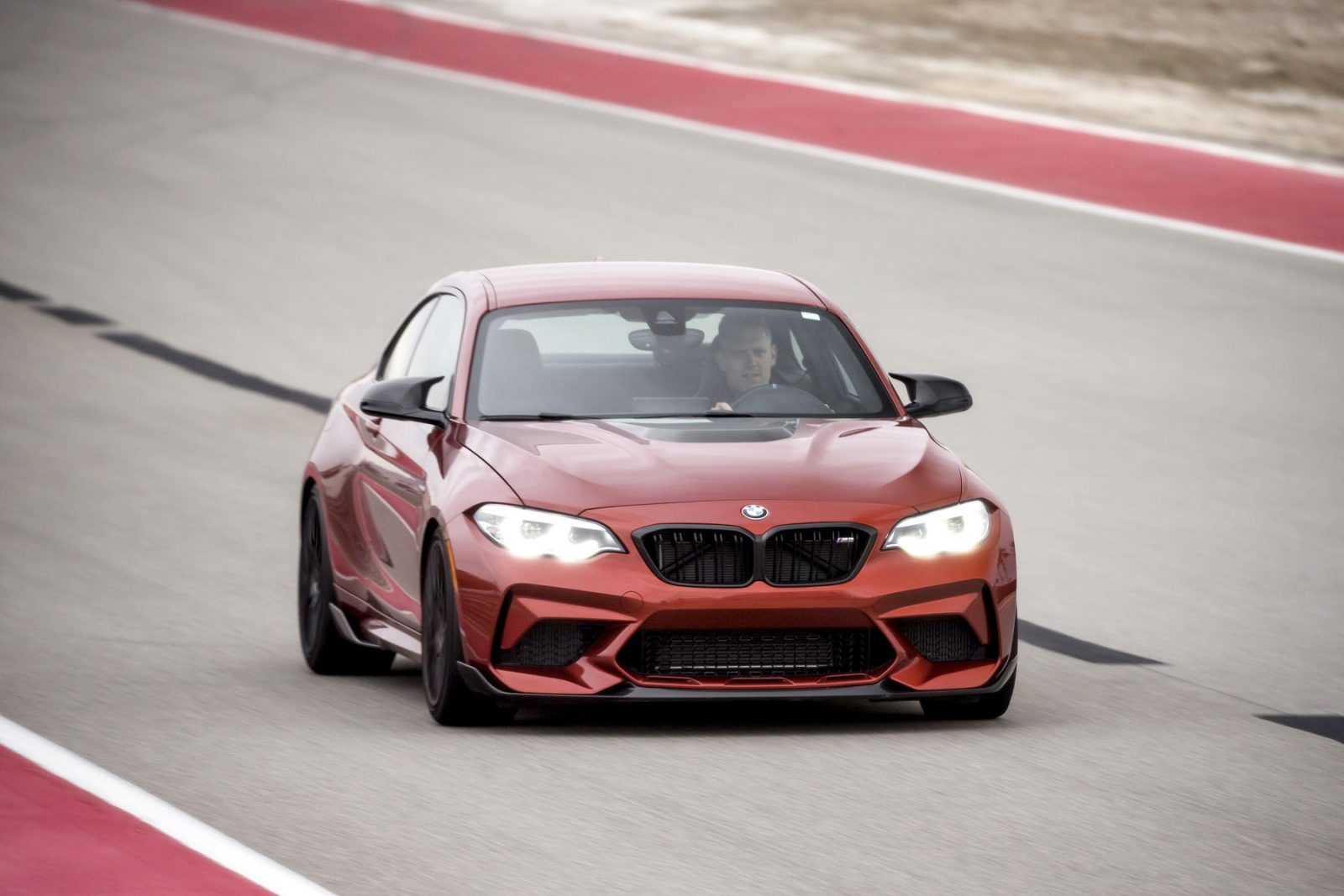 I had just gotten out of the M4 CS. You know the civilized version of the M4 GTS that was meant to be the ultimate M car. The CS is insane. Everything about it says ultimate M car. And in terms of outright speed and capability the M2 can’t touch it. But from the moment I accelerated out of the pits I immediately knew that the M2 Competition was the one. The one you’ll want.

The M2 has always been about pure fun. No it can’t quite match the 1M for insanity (or rarity). But it’s size to power (and torque) ratio puts it square in the middle of the golden ratio of M car fun. Then (thanks to WLTP regulations) BMW needed to retire it’s tweaked N55 engine. So the idea was hatched to drop in the fire breathing S55 from the M3/M4. While it’s destined at 405 hp (we can’t have the M2 out performing the M4 right?) the effects are still spectacular. Some will complain about the price increase. Others will complain about the 122 lb weight increase. But for them I would point you to the excellent M240i. This is the M2 we had all wanted. A car that is fully M with no apologies. And I’m happy to report it’s as rewarding, engaging and stupid fun as you’d expect. 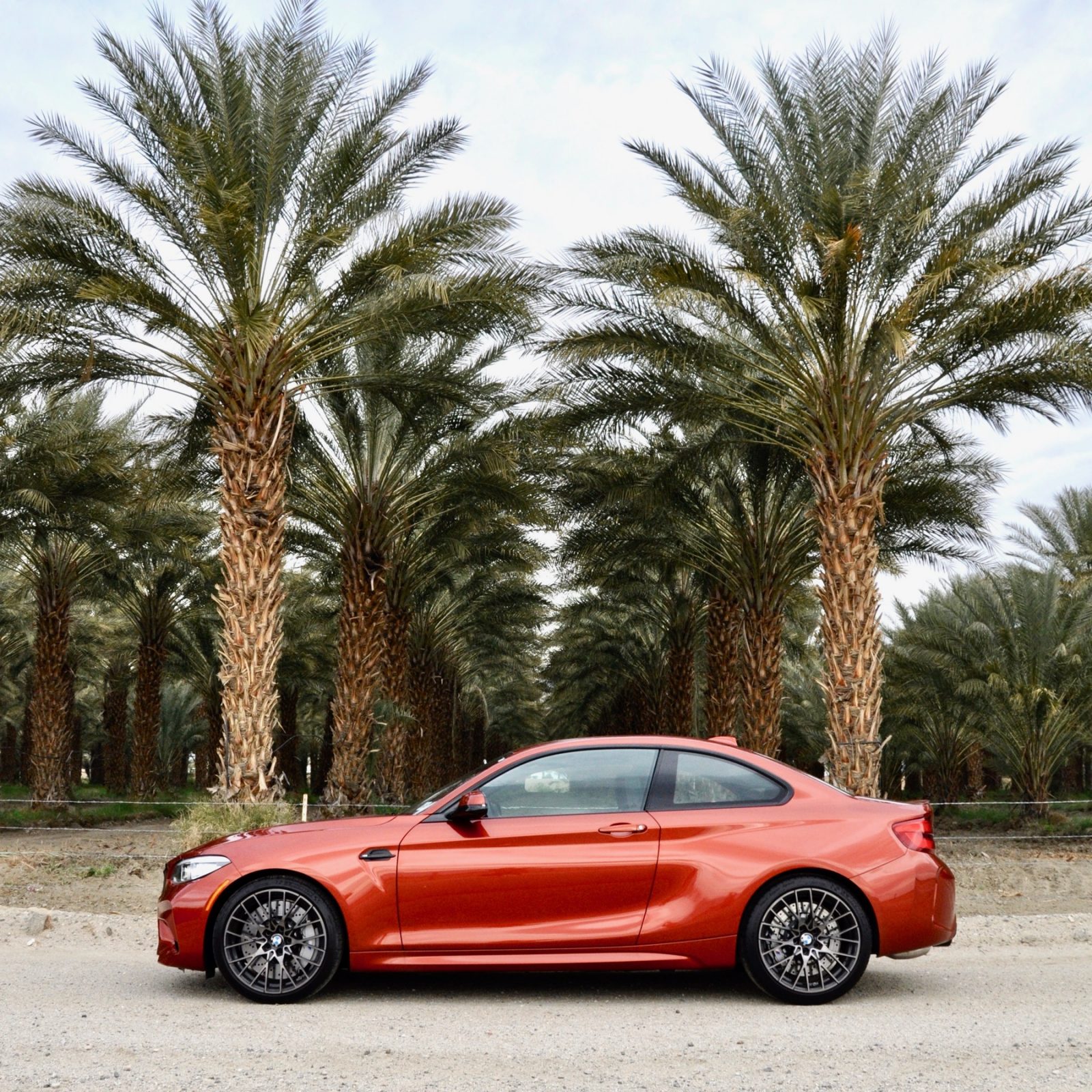 BMW M did more than just drop the S55 under the hood and add 40 hp. Also fitted is the carbon fiber front strut brace and retuned the steering mapping. The combination of the two has helped the M2 Competition feel more refined over rough pavement and generally less flustered. Steering feel and feedback is more natural and allows you to more intuitively react as a driver.

Elsewhere M added new rose joints in the rear suspension and massaged the spring rates and dampers. Interestingly dampers are now passive. Likely a move made by engineers as a way of focusing both the car and themselves. 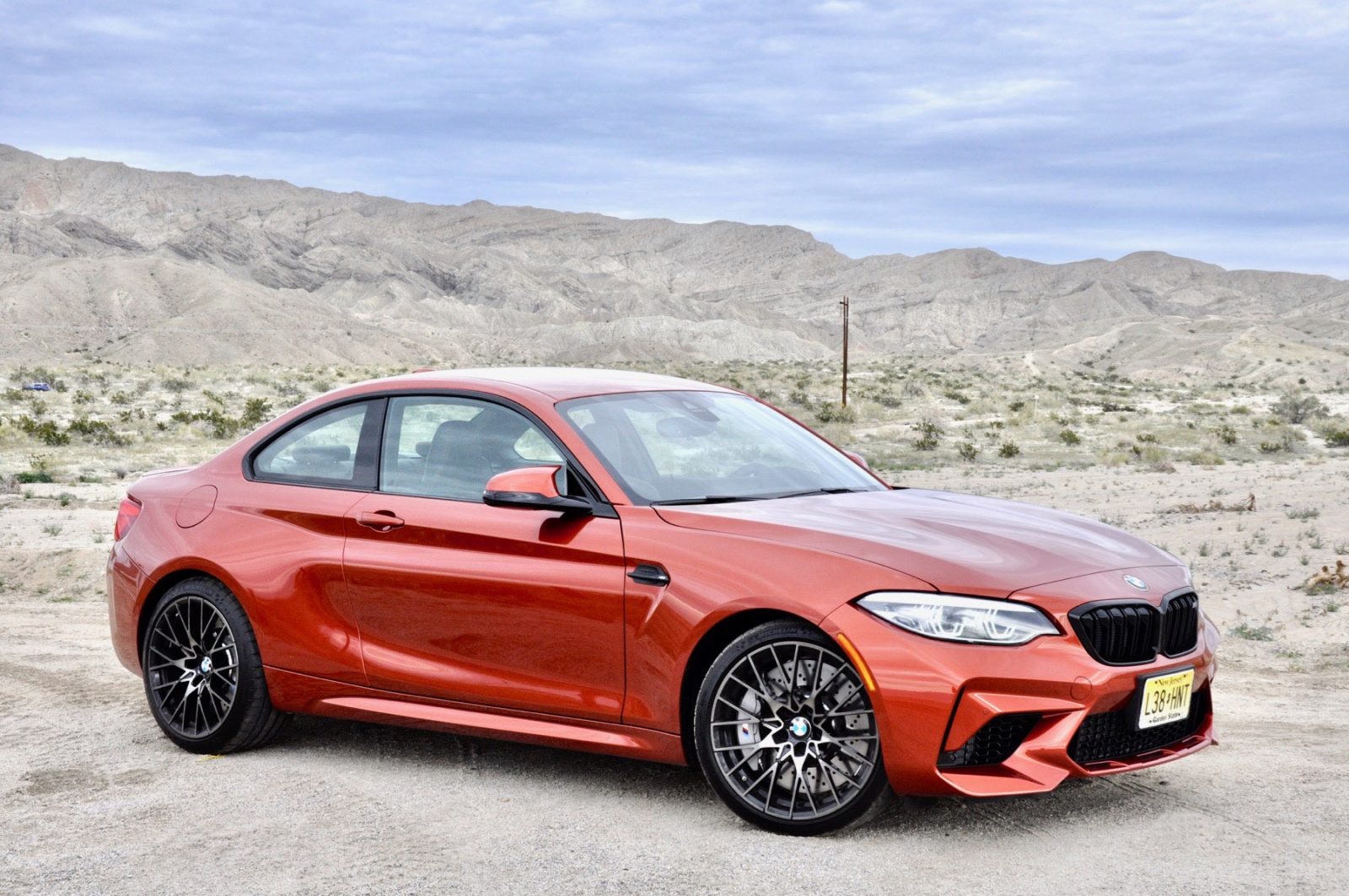 It all serves to make this even more of a drift machine than the previous M2. But beyond party tricks the M2 Competition feels more civilized as well as more ferocious. If you’re looking for an 1M-like raw experience, you’ll have to look elsewhere. But these changes have made the M2 Competition an even more rewarding car than the excellent original M2.

Then there’s the engine. The S55 is a well know commodity but dropped into a smaller car with a short wheelbase it feels even sweeter. The S55 is more responsive throughout the range and sprints towards its redline quicker than the N55 ever did. It’s also happier up there in the top end – something easily exploited by the excellent manual transmission that our test car came with. A DCT is optional as before and is also an excellent choice. We drove both back to back and came away favoring the manual due to its engaging nature. But the DCT on the track is immensely satisfying (i.e. laugh out loud fun). 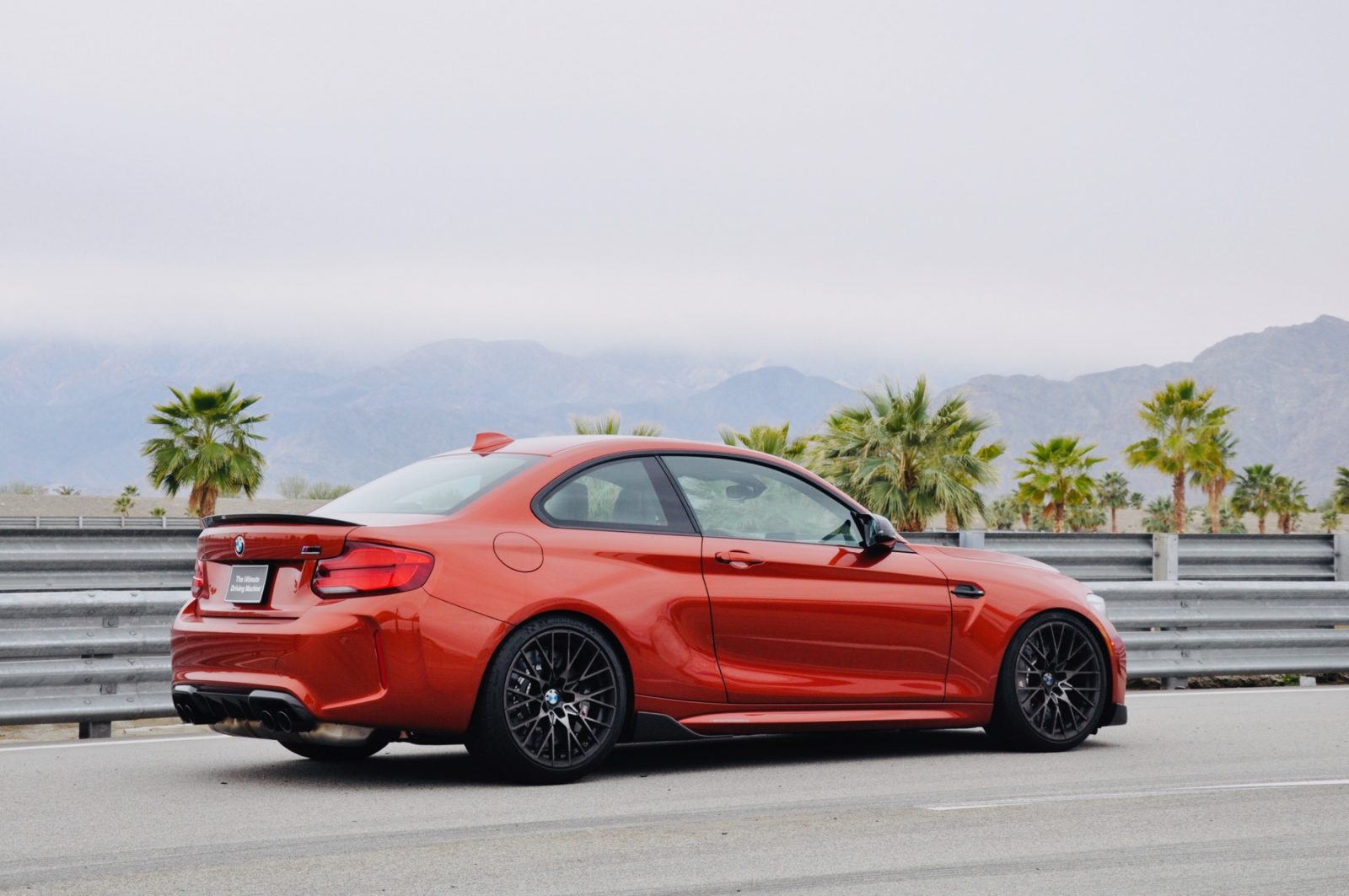 The M2 Competition we ran on the track was shod with just about every M Performance accessory you could imagine. The front coil-overs gave the car a better stance upfront and allow the 19” wheels to perfectly fill the wells. The brake difference is subtle but nonetheless impressive if you know the standard car.

Exterior design details included a carbon splitter, hood, side sills and spoiler. The overall look is stunning – especiall the stance. 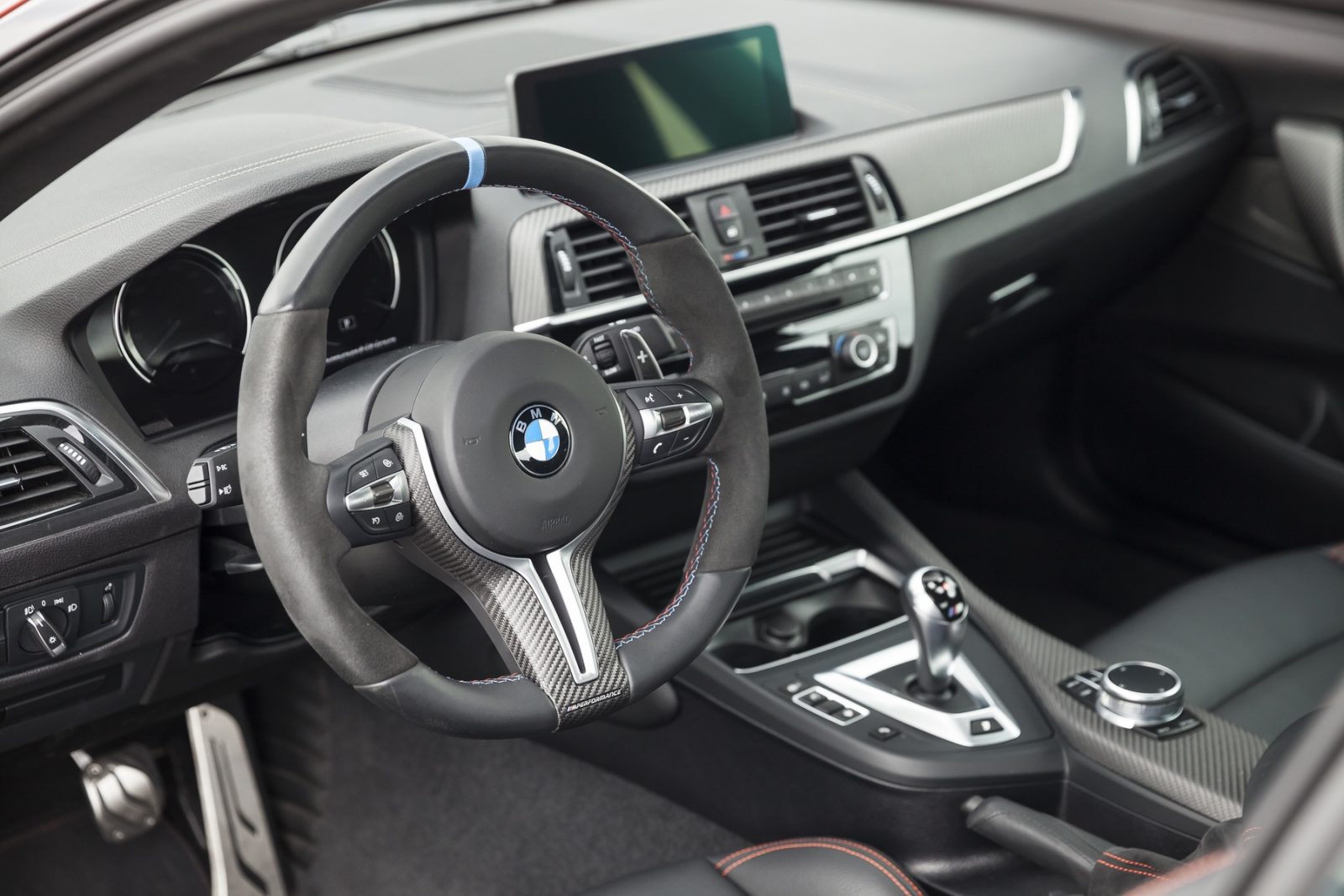 Inside this particulary M2 was fairly restrained with just the M Performance wheel on the options list. 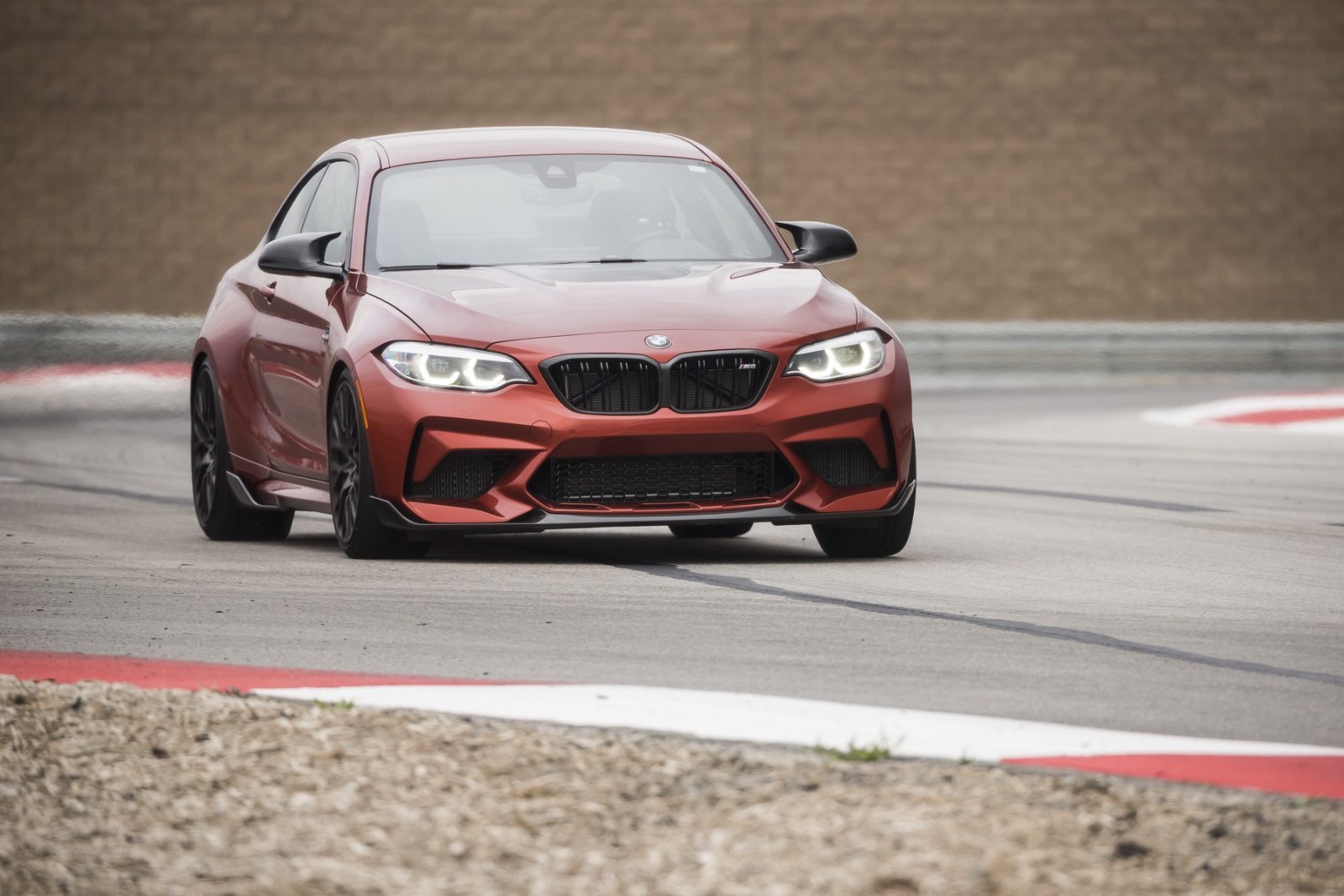 BMW M2 Competition: On the Track

The M2 manual we tested was completely stock and void of any M Performance parts. After some time running that in the desert canyons around Thermal, it was time to strap into M Performance Parts equipped DCT M2 Competition and head to the track.

Immediately this M2 felt different. Steering response and braking both felt more eager and the sound was on another level. And with MDM mode turned on the M2C was practically begging to be drifted out of corners (something the stock M2 does with or without M Performance Parts). Not only was this M2 more eager and controllable at the limit, it was noticeably faster than last year’s M2 thanks to the upgrades from the Competition package. Yes there’s more weight (121 lbs of it) in Competition form, but the added power and torque more than made up the difference. 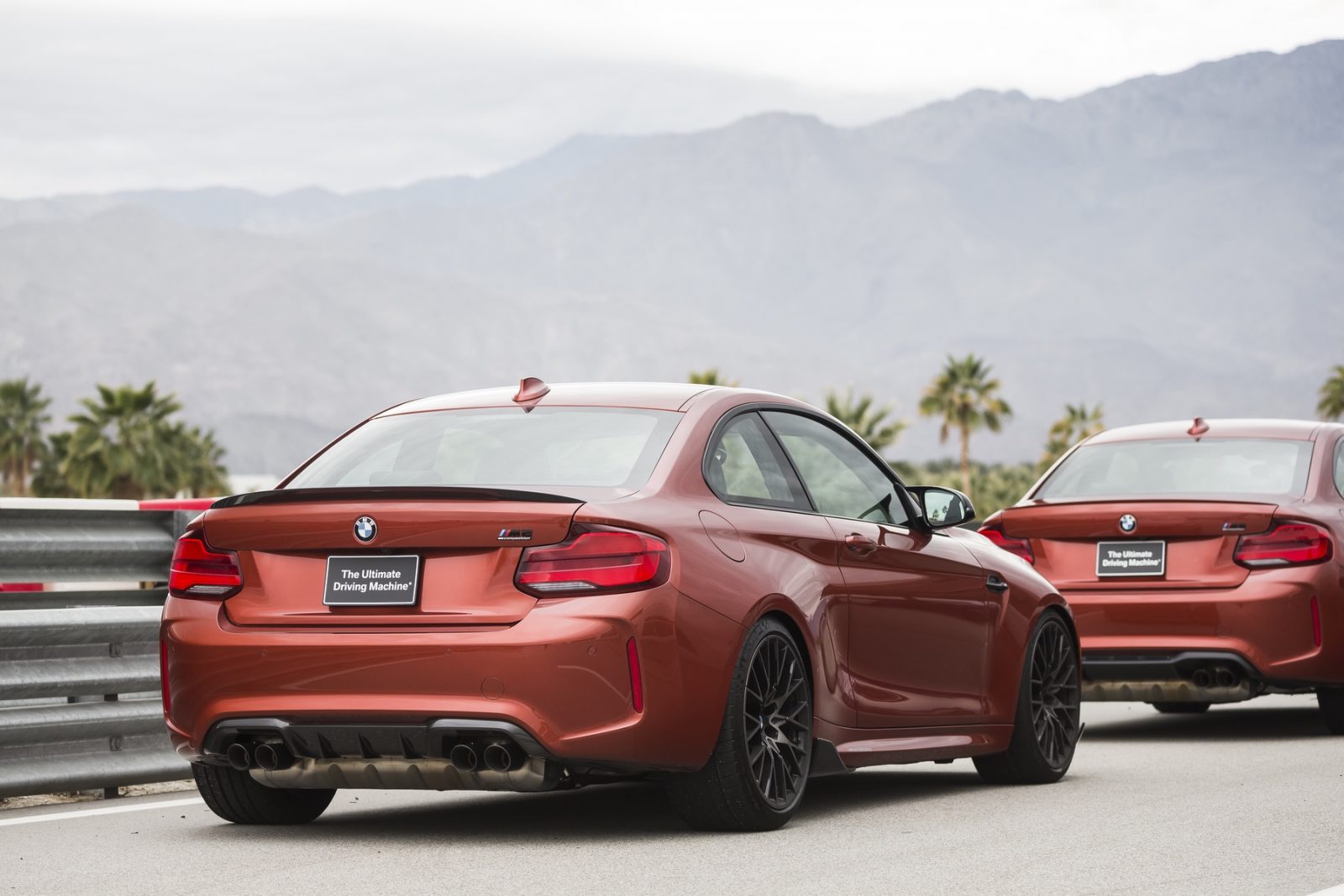 The combination of the chassis improvements and fresh tires allowed for crisp and quick corners and consistently fast lap times. Above all else these modifications allowed us to brake later into corners and exit far quicker than the standard M2 we had just stepped out of.

In short the M2 Competition modded with M Performance parts is an absolute blast on the track. Even with MDM mode on you could easily coax the M2 into sweet corner exit drifts just like the 1M. Yes the M4 CS is more rapid in every way but back to back there was no question which car was more fun to throw around. The M2 Competition is simply more fun, more eager and ultimately more rewarding. 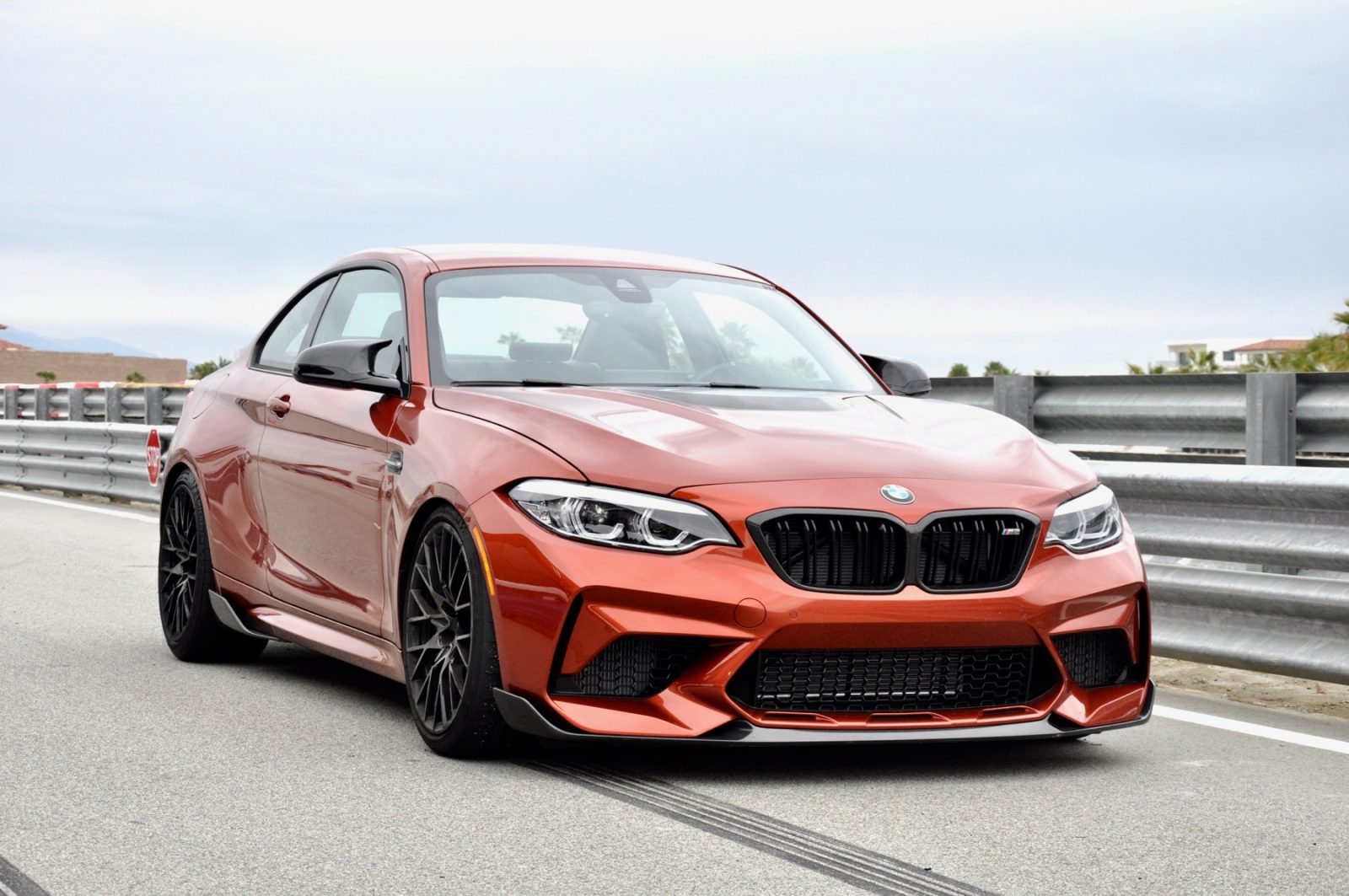 Are M Performance Accessories Worth it?

Having driven both a standard $60,100 M2 Competition and an $80k example blessed with M Performance accessories, we had a unique opportunity to judge just what mattered. The reality is the most basic manual transmission M2 is our pick from an every day ownership perspective. The ride is better, the splitter doesn’t scrape the ground and the exhaust won’t wake the neighbors. And then there’s the cost. The exhaust system retails for $2,000 before installation and interior Alacatara and M Performance steering wheel add another $1,200. Outside the exterior carbon parts are over $1,900 and the coil-overs are $2,700. All in we’re looking at over $13,000 in upgrades on the car that we tested. Which begs the question – are they all really worth it?
 
Given our experience it’s really the exhaust and coil-overs that make the driving experience truly better. For our money they would be our only consideration when checking boxes at the time of ordering. 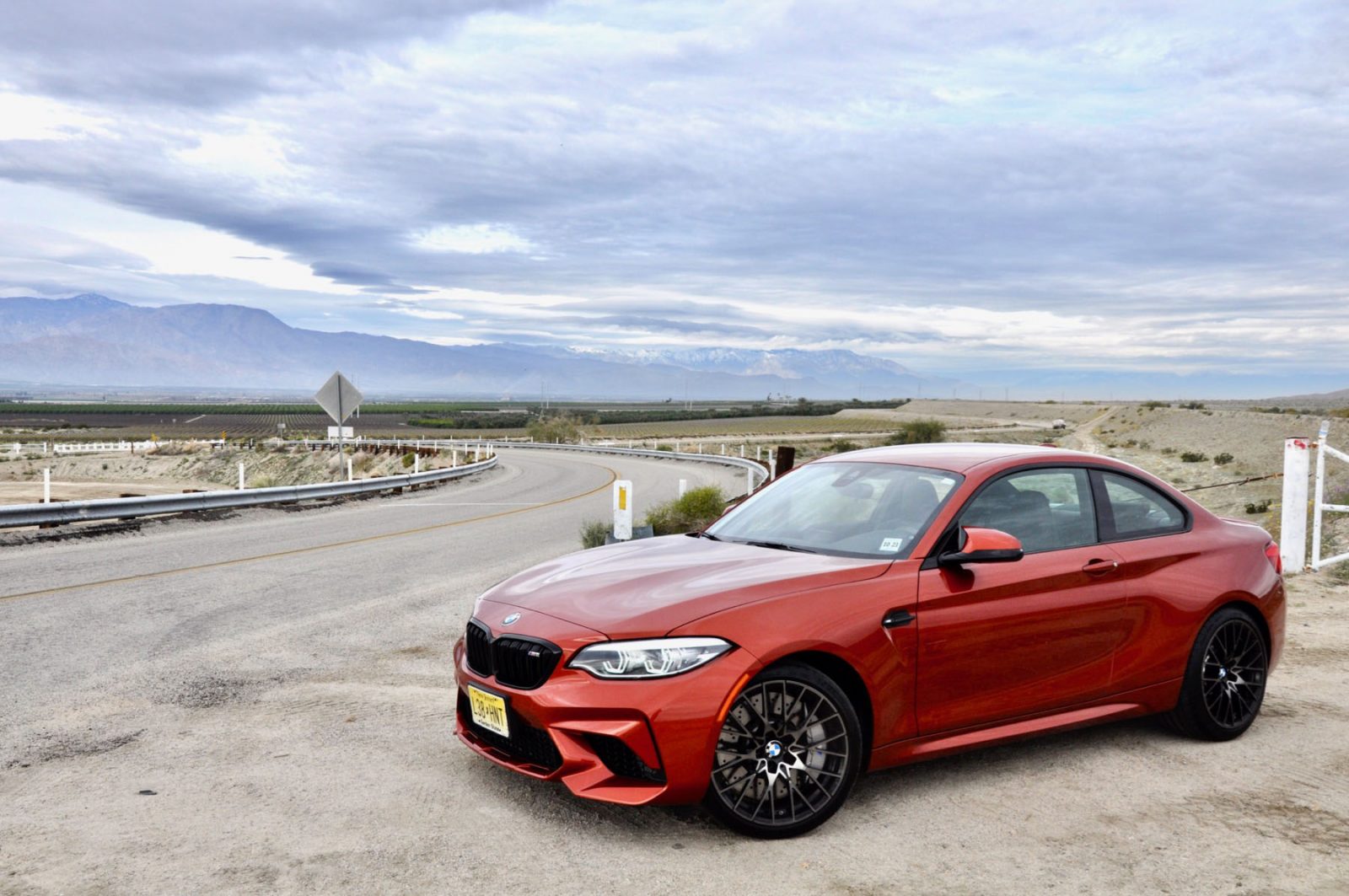 Lap after lap the M2 Competition DCT thrilled us to no end. More fun and ultimately engaging than even the M4 CS, the M2 with the M Performance parts lived up to all the hype. But it was on the road and in manual form where I fell in love with the car. There’s now added poise to go along with the torque laden laughs that the M2 has been known for. And there’s a full M pedigree that we’ve never seen in a small M car. 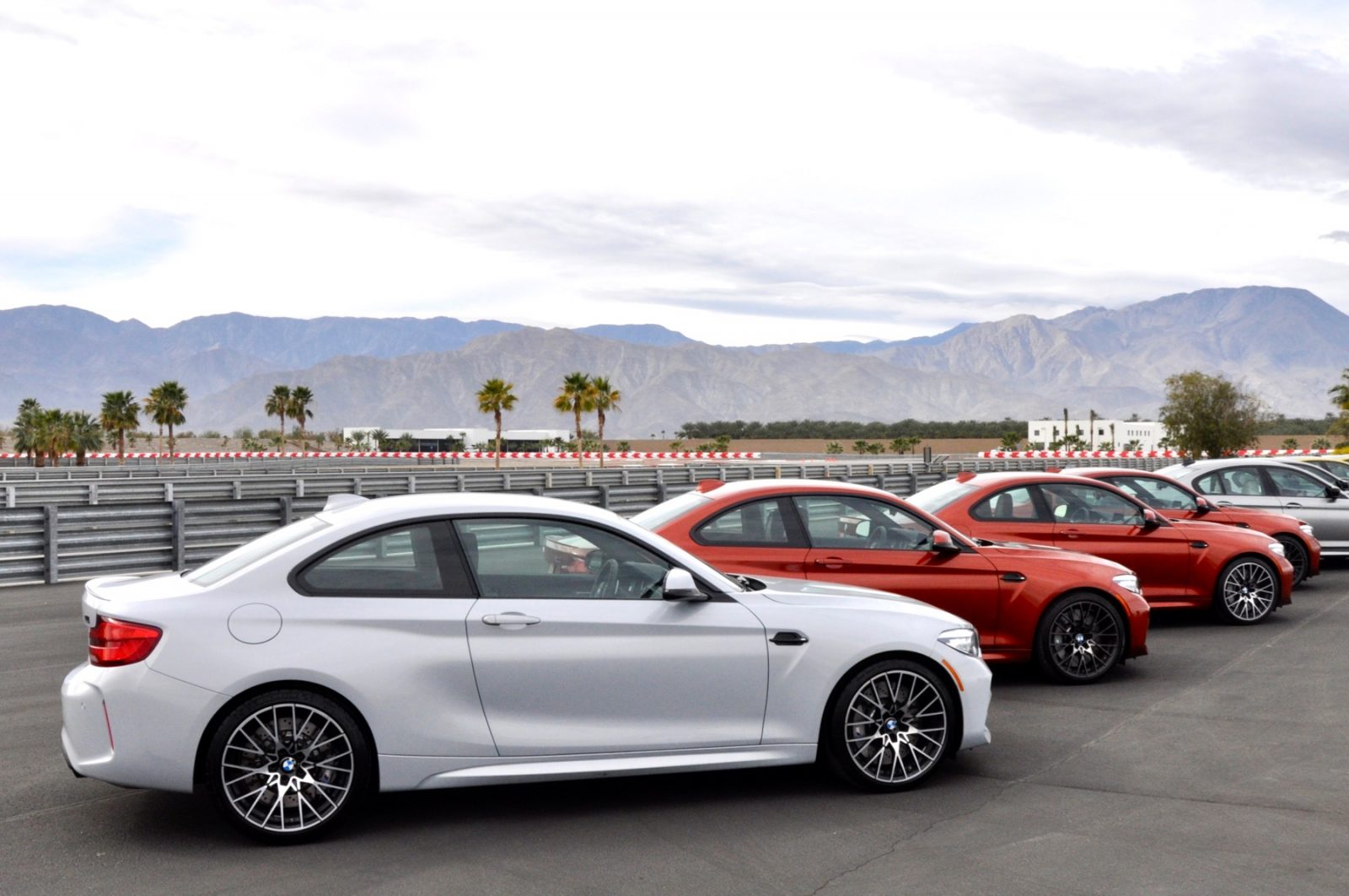 It’s not a 1M follow-up mind you. Weight, electrically boosted steering and an increase in wheelbase make this a different proposition. But don’t mistake that for a critique. This is a car that is rightfully the heir to the 1M thrown and therefore the most pure M car offered by BMW. In other words, somewhere deep inside the new M2 Competition lies the soul of the M brand and proof that great M cars can still exist in a world of regulation and SUVs.

Yup. This is the one.