When BMW creates a new MotoGP car it’s usually more than just a sticker job. Holding true to this tradition we present you the BMW M8 MotoGP Safety car. Heavily modified with ever conceivable (official) BMW M Performance part and many one-offs, the M8 safety car is designed to not only showcase what’s possible from the BMW parts catalog but what the M8 can do on a track. Read on for the full list and press release. 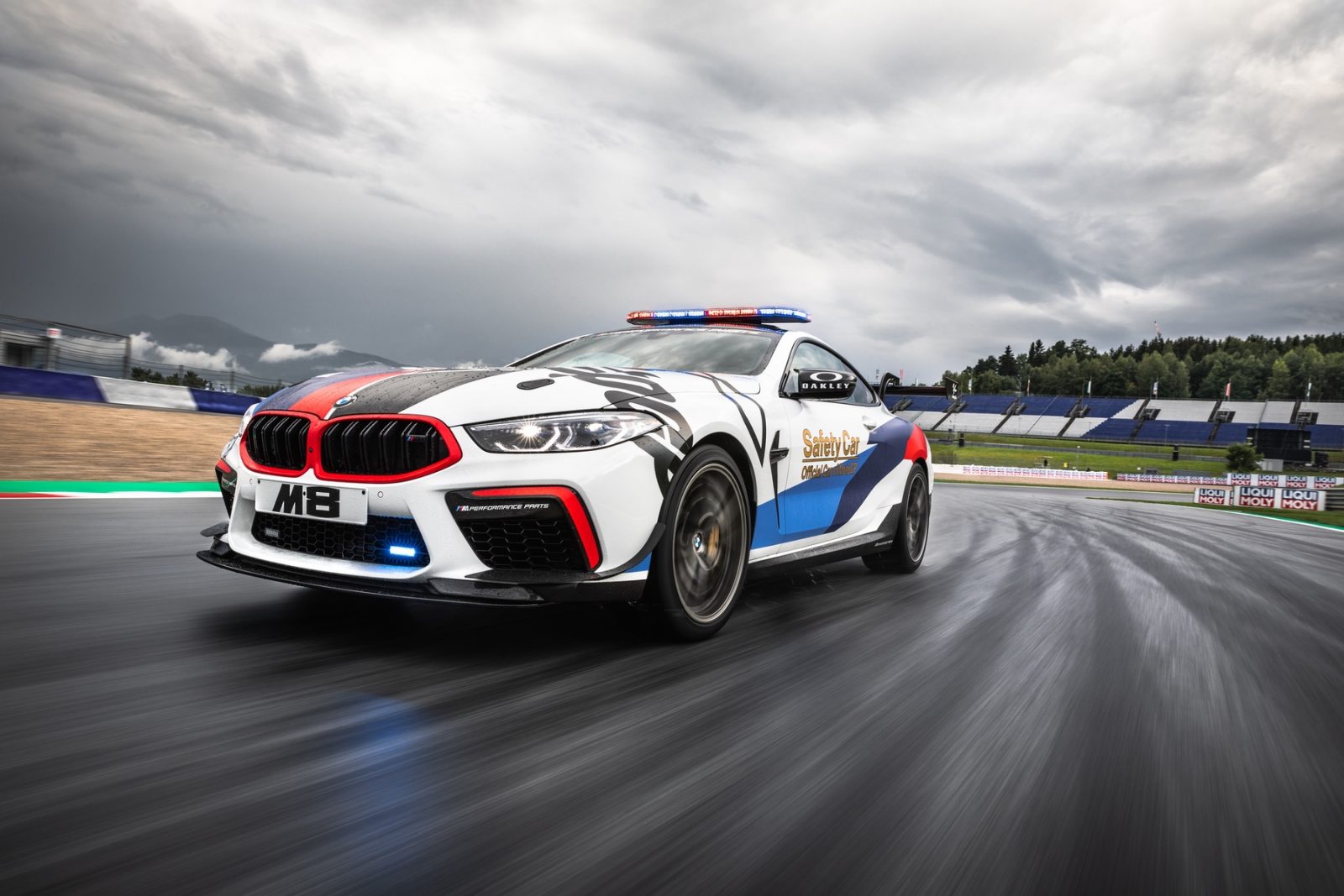 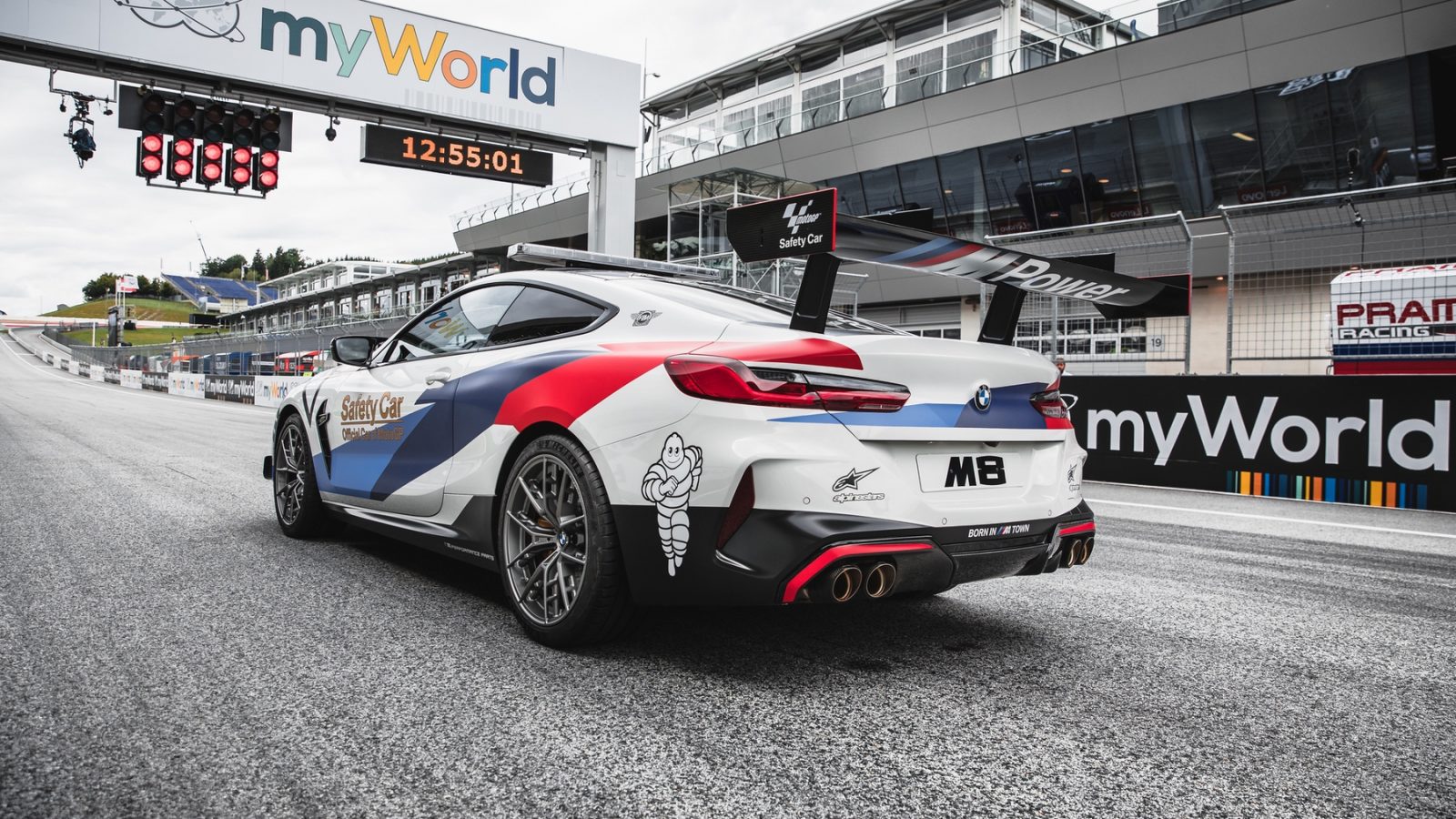 Innovative high-performance automobiles for the safety of the top tier of motorcycles is the principle that has guided BMW M GmbH for more than 20 years as partner of MotoGP organiser Dorna Sports and ‘Official Car of MotoGP’. The Munich-based company has provided the official MotoGP Safety Car fleet since 1999 and the BMW M8 MotoGP Safety Car is the latest highlight in a long line of high-powered lead cars.

“The BMW M8 and the BMW M8 GTE were developed in parallel, and these racing genes distinguish the BMW M8 models in all areas,” said Markus Flasch, President of BMW M GmbH. “That’s why it was a logical step for us to choose the BMW M8 Competition as a basis for our new MotoGP safety car. Even in its production version, this high-performance automobile is suited to the racetrack. With its innovative technical features, it is yet another example of our quest to keep pushing the limit upwards. With the BMW M8 MotoGP Safety Car, we are really excited to present a new, powerful lead car for the top tier of motorcycle racing.” 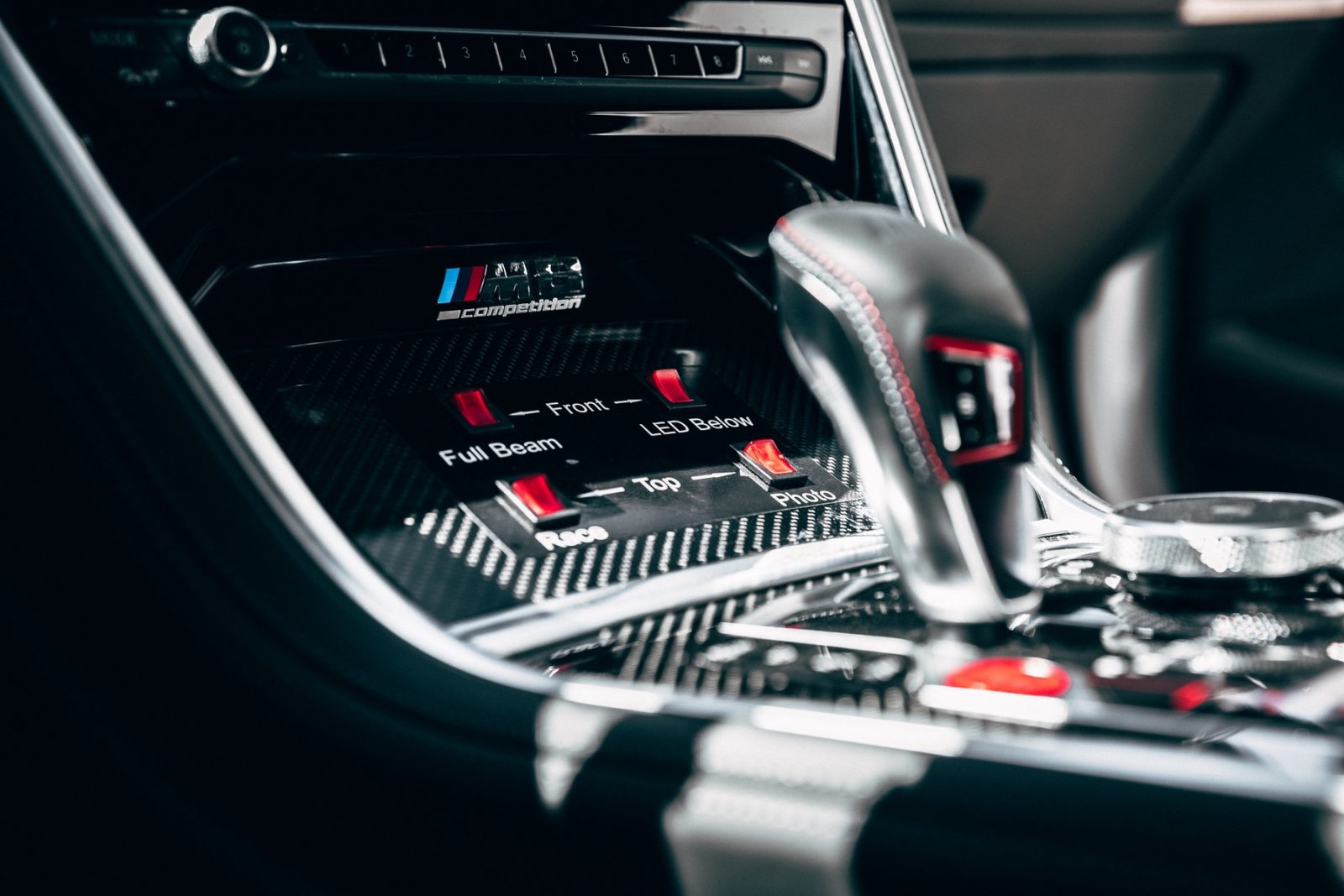 The M power under the bonnet comes from the most powerful engine ever developed for a BMW M GmbH car. The high-revving V8 unit with M TwinPower Turbo technology develops 460 kW/625 hp. The high-performance power unit teams up with an eight-speed M Steptronic transmission with Drivelogic, and the engine’s power is channelled to the road via the M xDrive all-wheeldrive system. One of the features that stands out in particular is a newly developed integrated braking system, an M-specific version of which presents the driver with two different brake pedal feel settings.

The precise interaction between powertrain, chassis technology and aerodynamics has been carefully honed over the course of intensive testing at the BMW Group’s test track near Miramas in southern France, the winter testing centre in Arjeplog, Sweden and the Nürburgring’s Nordschleife circuit, along with other race circuits. Experience collected from the development of the BMW M8 GTE racing car also played a role in the configuration process. The performance-focused character of the engine, transmission and chassis allows the new BMW M8 Competition to power from 0 to 100 km/h (62 mph) in 3.2 seconds. 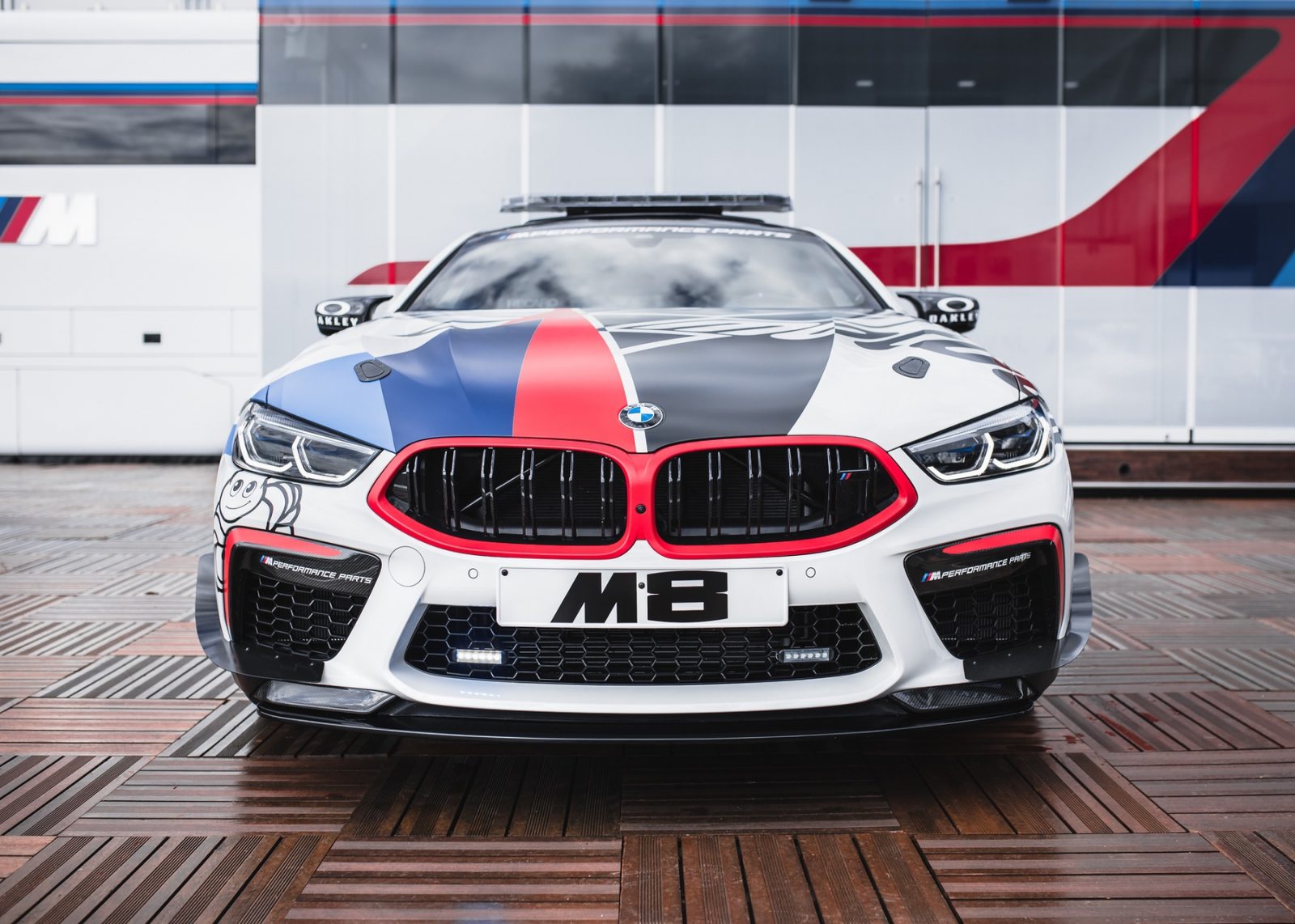 Painstaking manual work at the BMW M Manufaktur in Garching converted the high-performance base car into the BMW M8 MotoGP Safety Car, preparing it to appear as the course car in the world’s fastest motorcycle racing series. This process included the addition of numerous BMW M Performance Parts, many of which are available as retrofit parts for the BMW M8 production model. These emphasise the sporty appearance of the Safety Car and meet all the functional requirements for aerodynamics, cooling and lightweight construction. The transformation of the BMW M8 Competition to a MotoGP Safety Car was completed by the inclusion of special racing features and the necessary safety equipment. 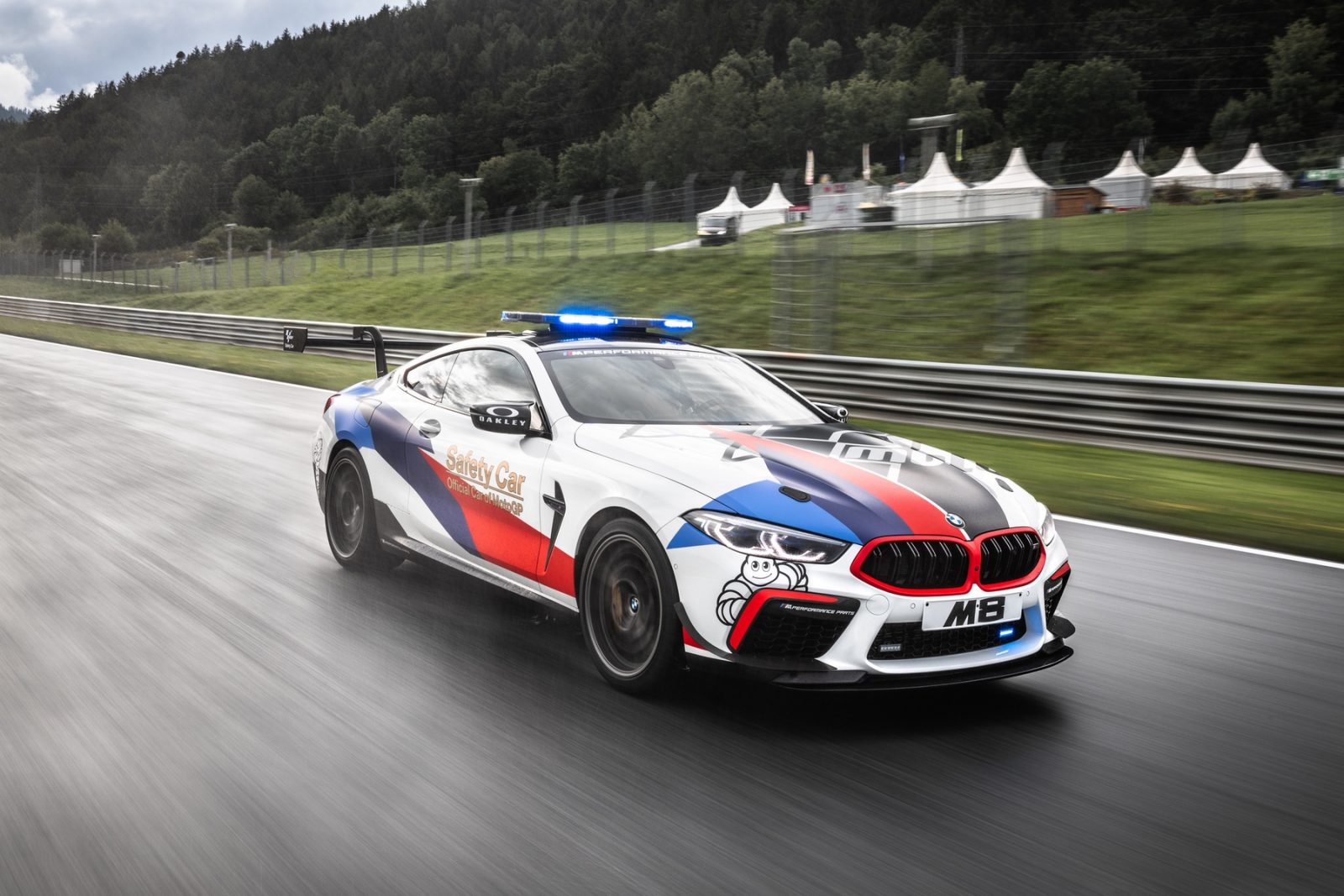 Disappointing Results for BMW Team RLL at the Glen