Continuing in its tradition of showing lightly disguised concepts, BMW has unveiled the BMW Concept 4. This concepts gives us clear glimpses into what BMW has planned for the 2021 4 series and 2022 M4. And that large kidney grille? Rumors have pointed for some time that both the M3 and M4 would be getting a much larger kidney grille that spans from the hood to the lower air intake. This would differentiate the M products from their Series counterparts and mark them as more aggressive and focused. But this is decidedly not an M concept which could very well point to this grill (or a variation of it) being adopted across the 4 Series line-up. 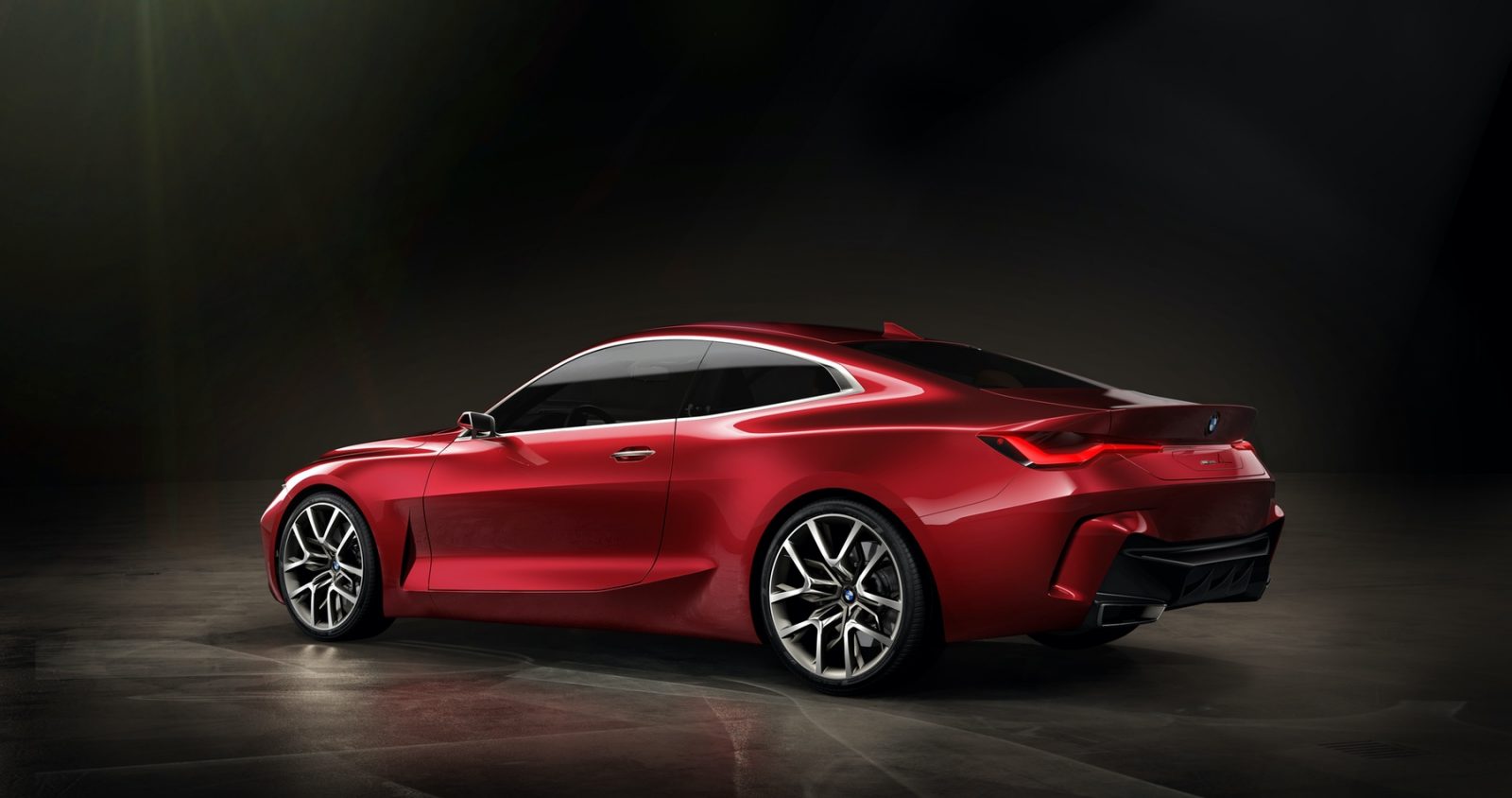 Elsewhere we see the 8 series design language evolved and applied. That means the long standing tradition of a strong belt-line is gone making way for more organic and voluminous shapes.

With all of this BMW is clearly signaling an increased need to differentiate the 4 from the 3 and further justify the price difference between the two. Luckily the result is successful – at least in our eyes.

We’ll have more on the Concept 4 and the next generation 4 series soon. 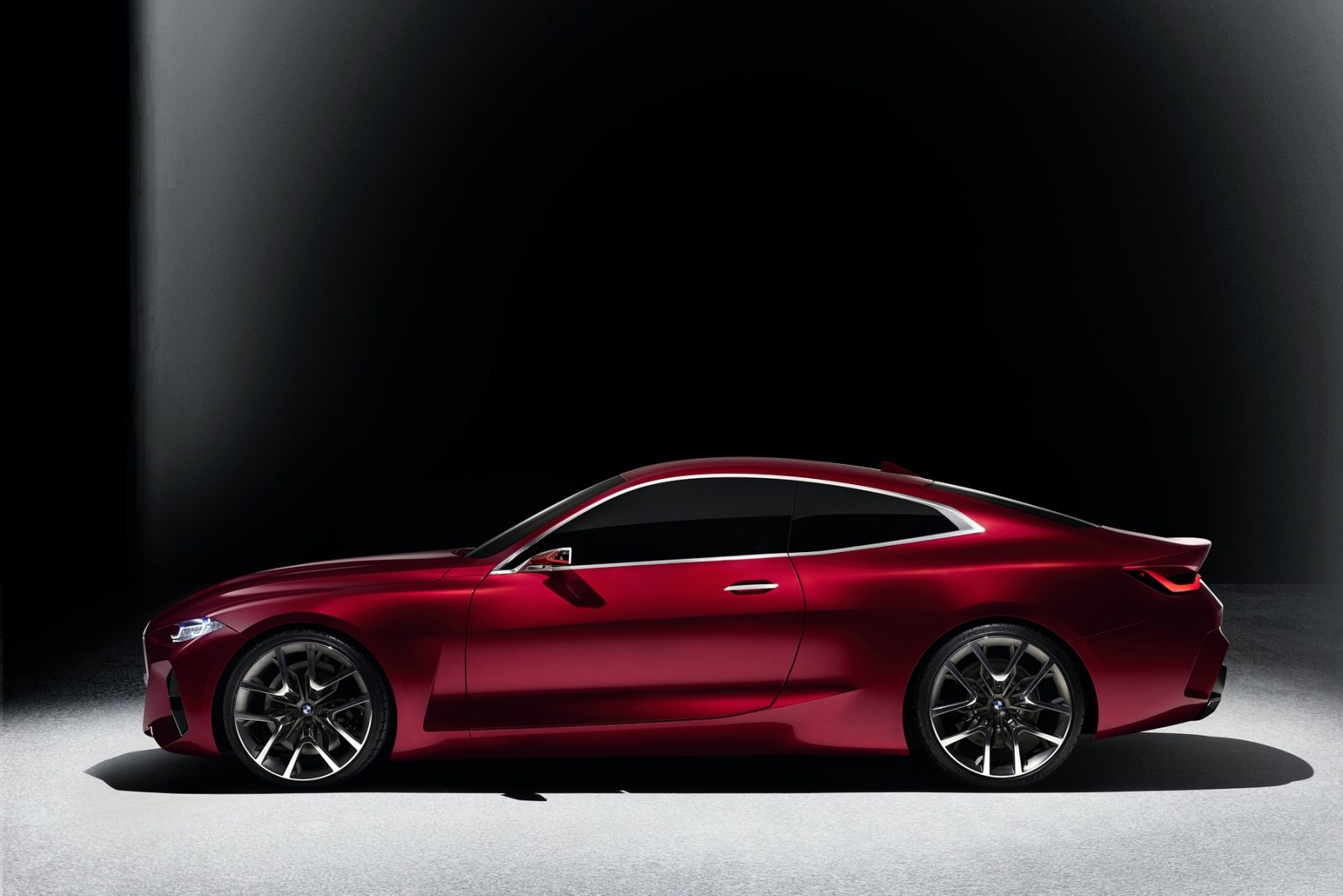 The 68th IAA Cars show in Frankfurt is the venue for the unveiling of the BMW Concept 4 – a future-focused interpretation of the BMW Group’s enduring DNA that represents the magic of coupe driving at its most exciting. 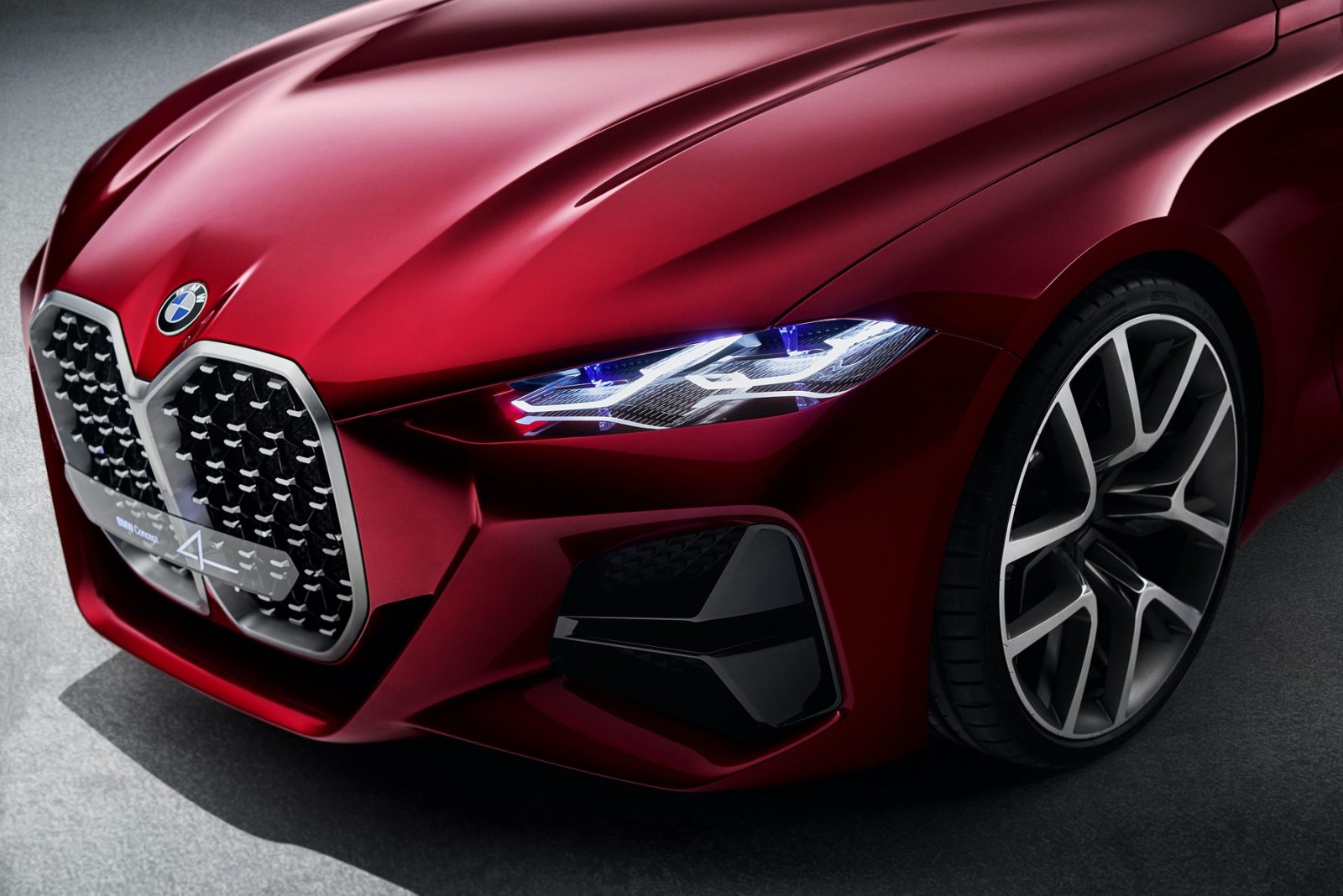 The front end – the new face of the 4 Series range.

The BMW Concept 4 hovers close to the road. The distinctive kidney grille, remarkable air intakes and prominently sculpted surfaces provide an immediate advert for the car’s performance and its engaging character as a driver’s car.

Grabbing the attention at the heart of the front end is the vertical kidney grille. “The kidney grille has always been a signature feature of BMW cars,” reflects Domagoj Dukec, Head of BMW Design. “The BMW Concept 4 presents a confident and classy take on this iconic feature. At the same time, the BMW Concept 4 offers a look ahead to the expressive face of the 4 Series range.” The vertically oriented grille fits seamlessly into both the proportions of the front end and BMW’s illustrious past. Indeed, its form and design reference legendary classics such as the BMW 328 or the BMW 3.0 CSi and therefore shine the spotlight on the BMW brand’s long and successful history as a maker of fine coupes.

The kidney grille is also home to some elaborate details. The grating itself contains horizontal trim elements with a faceted cut which create a neat contrast against the sporty design of the front end and lend depth and exclusivity to the grille. Look closer and another highlight is revealed: the intricate grating within the kidneys and air intakes, which is made up of an array of small “number 4s” joined together.

The slim and focused twin headlights are slightly angled and team up with the kidney grille to lend the front end a modern look with a strong identity. The striking LED light elements have no glass cover; instead they are worked into the body like threedimensional sculptures. This allows them to bring an even greater sense of modernity and technical sophistication to the front end. The sharply contoured bonnet extends the lines of the front end through powerful volumes and edging of precision. The bold surfacing frames the kidney grille like a gemstone. 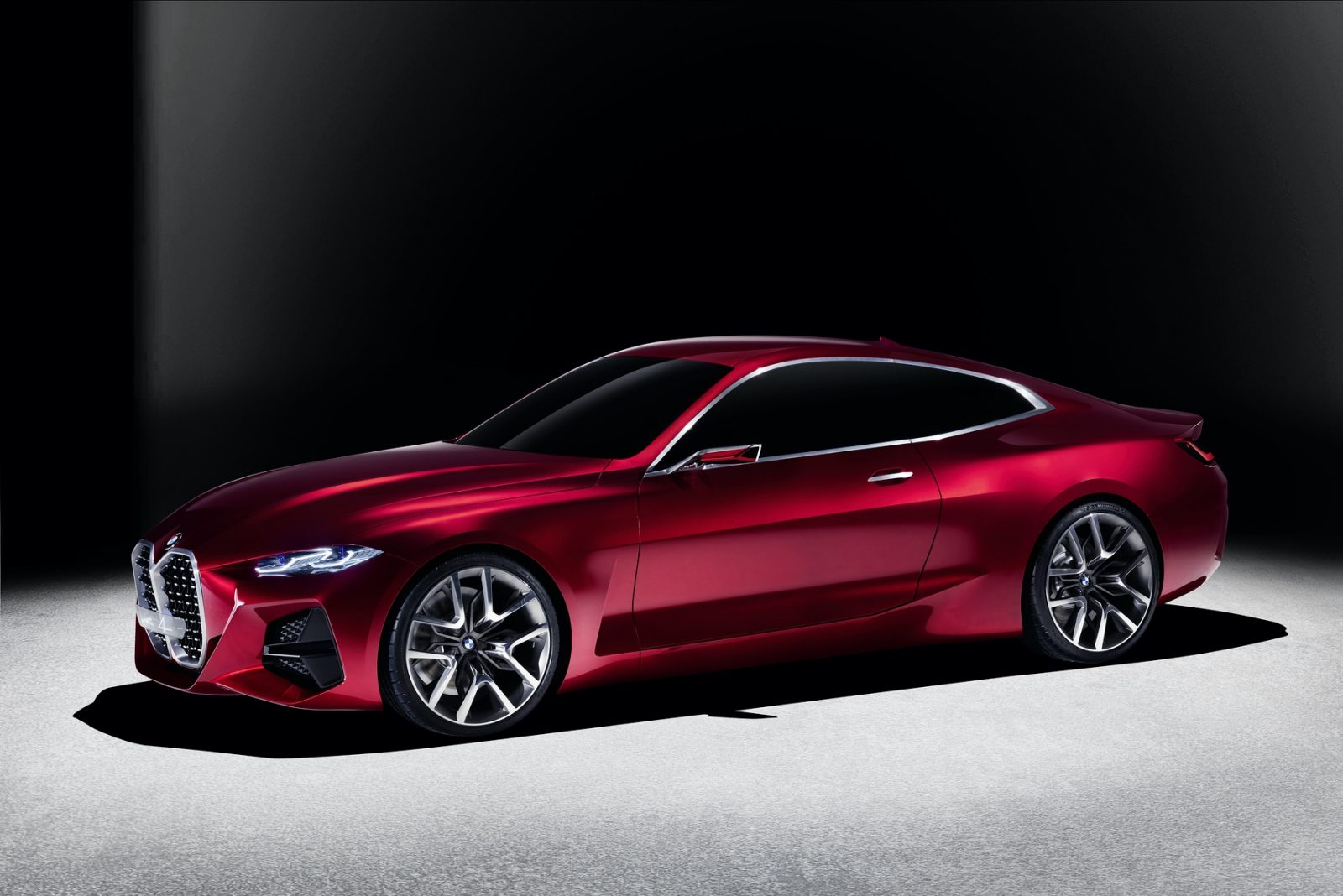 The side – the aesthetic essence of a modern BMW coupe.

The BMW Concept 4 displays BMW’s signature proportions at their most modern form yet. The stretched bonnet, long wheelbase, flowing roofline and short overhangs create a modern, elegant and dynamic coupe outline and send energy coursing through the lowslung body even while it’s standing still. Within the silhouette, the ultra-pure surfaces of the new BMW Concept 4 form a powerful main body. The interplay of tautly chiselled volumes and a small number of extremely precise contours create a rare sense of emotion and dynamism. The expressive exterior paint tone Forbidden Red accentuates the car’s surfaces particularly vividly; those in the light at any one time project a rich, glossy red, while shade creates an almost black effect and a striking contrast. The interaction of contours and volumes therefore exude a dramatic sense of radiance and depth.

The athletic body incorporates a slender glasshouse with a narrow window aperture, which further emphasises the dynamism of the side. The long, sweeping roofline flows smoothly into the boot lid, giving the rear end a high-class and sporty aesthetic. The bulging rear wheel arches lend visual expression to the power coursing through the rear wheels and accentuate the muscular shoulders higher up. The slender area above the front wheels, meanwhile, strikes a neat dynamic balance. Its tempered volumes enhance visual agility and lightness. Together, the two sets of wheel arches give the new BMW Concept 4 a powerful and confident stance.

A horizontal main line between the wheel arches takes the place of a classical contour line in shaping the character of the flanks. It runs relative low down along the side of the car, creating a low visual centre of gravity. Further down, another character line rises dynamically from the rear of the front wheels towards the boot lid, bringing extra agility into the mix. 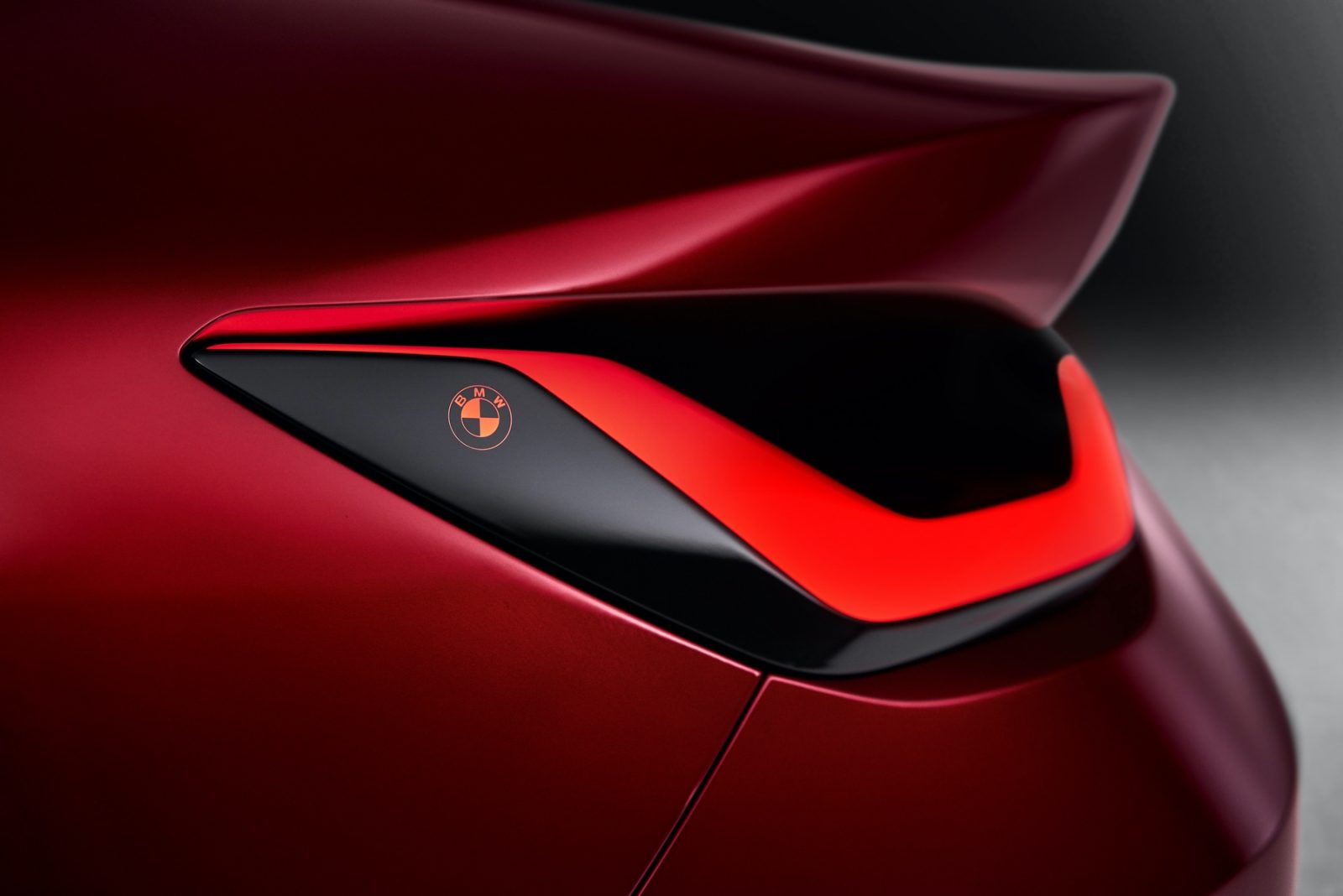 Look at the BMW Concept 4 more closely and further classy details are revealed. The minimalist, two-section exterior mirrors emerge harmoniously out of the weather strips. The lower section in polished aluminium extends the weather strip in a flowing movement and becomes a mirror surface, while the aerodynamically optimised rear section is in body colour and rounds off the design of the mirrors in dynamic fashion. On the inside of the mirrors is an apparently floating BMW logo, which only comes to light on more detailed inspection.

The light-alloy wheels of the BMW Concept 4 are equally rich in detail. The 21-inch items represent a heavily “dished” take on the sporty five-spoke design, drawing the eye into their centre-points. The fronts of the intricate spokes have a high-polished finish, while the set-back surfaces are finely ground to create a slightly darker effect and give the rim design a sophisticated contrast. 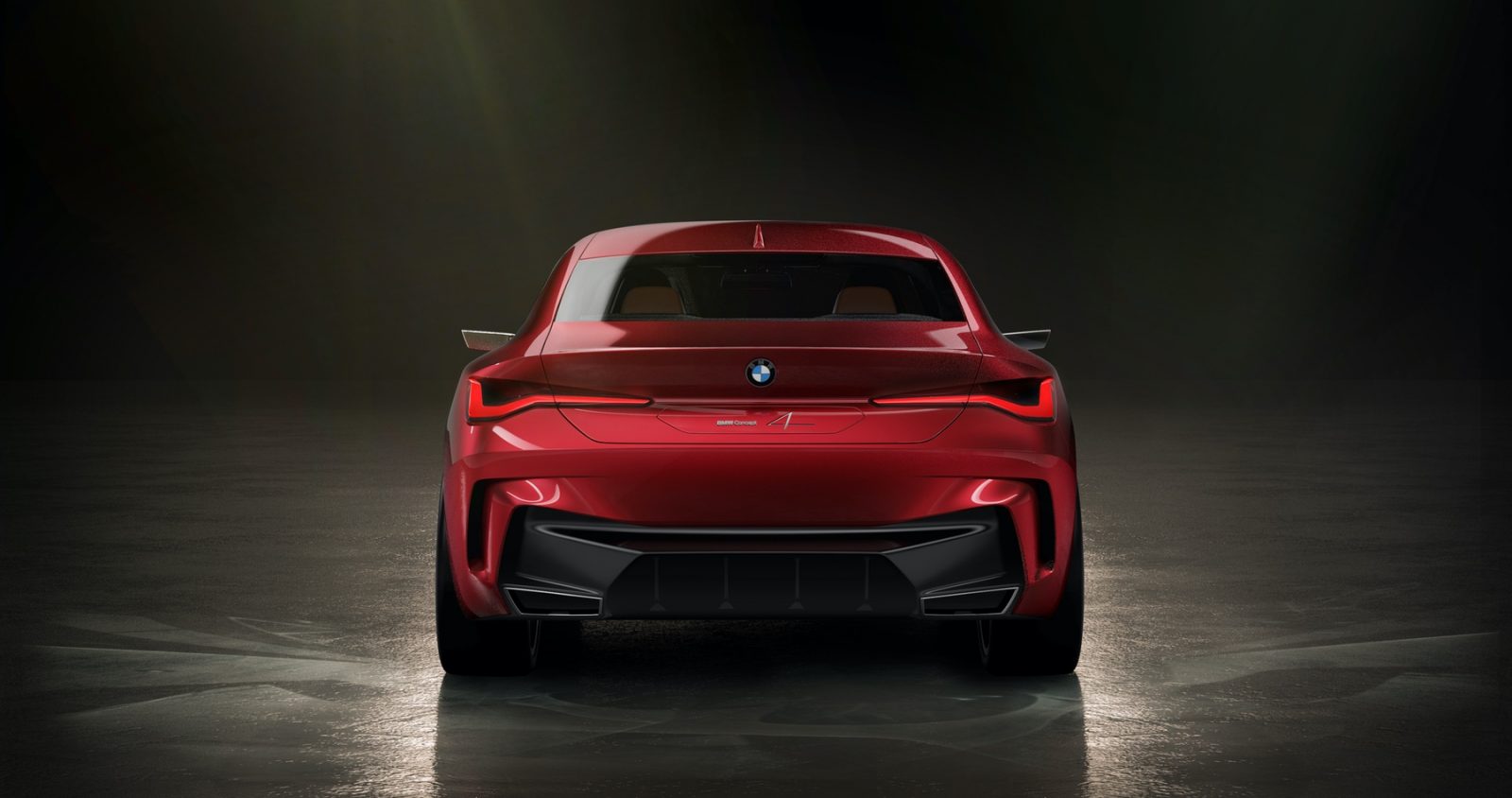 The rear of the BMW Concept 4 sits low over the road, as befits a sporty car. The character line transitions from the flanks into the rear end in a broad, horizontal sweep and visually reduces the coupe’s height off the ground even further. Picking up where the front end left off, generously sized and clear surfaces with only a small number of lines are the dominant theme. Purism runs through every element of the rear end and creates a prominent tail graphic. The sporty glasshouse is indented into the powerful body, allowing it to chisel broad and athletic shoulders into the BMW Concept 4’s design. The vertical air outlets frame the lower section of the rear and emphasise the car’s broad stance. The LED rear lights consist of a single fibre-optic element, which lends the familiar BMW L shape a cutting-edge “heartbeat” graphic and dispenses with a glass cover. Their contours underscore the sportingly horizontal focus of the rear end and accentuate its brawny stance on the road. The striking diffuser integrated into the muscular rear apron sets the seal on the car’s rear-end design. Its vertical fins break up the clean surfaces of the car’s tail to send a statement of fine sporting pedigree, while the High-gloss Black paint finish with metallic particles lend it additional visual impact. The pair of exhaust tailpipes highlight a new and dynamic free-form, a detail of the BMW Concept 4’s design that expresses what this car is all about: the modern essence of a coupe oozing aesthetic appeal from every pore.