The new BMW M340i Touring has launched pretty much everywhere except the US market. With the rise of the crossover and the popularity of the X3 (which now outsells the 3 Series as a whole), BMWNA decided several years ago that the Touring had no future in the US. While BMWNA never broke-out Touring sales we’ve been told that they didn’t reach levels of sustainability for the market.

So pour one out for the 3 Series Touring as it continues to get better as its now based on the excellent G20 3 Series. 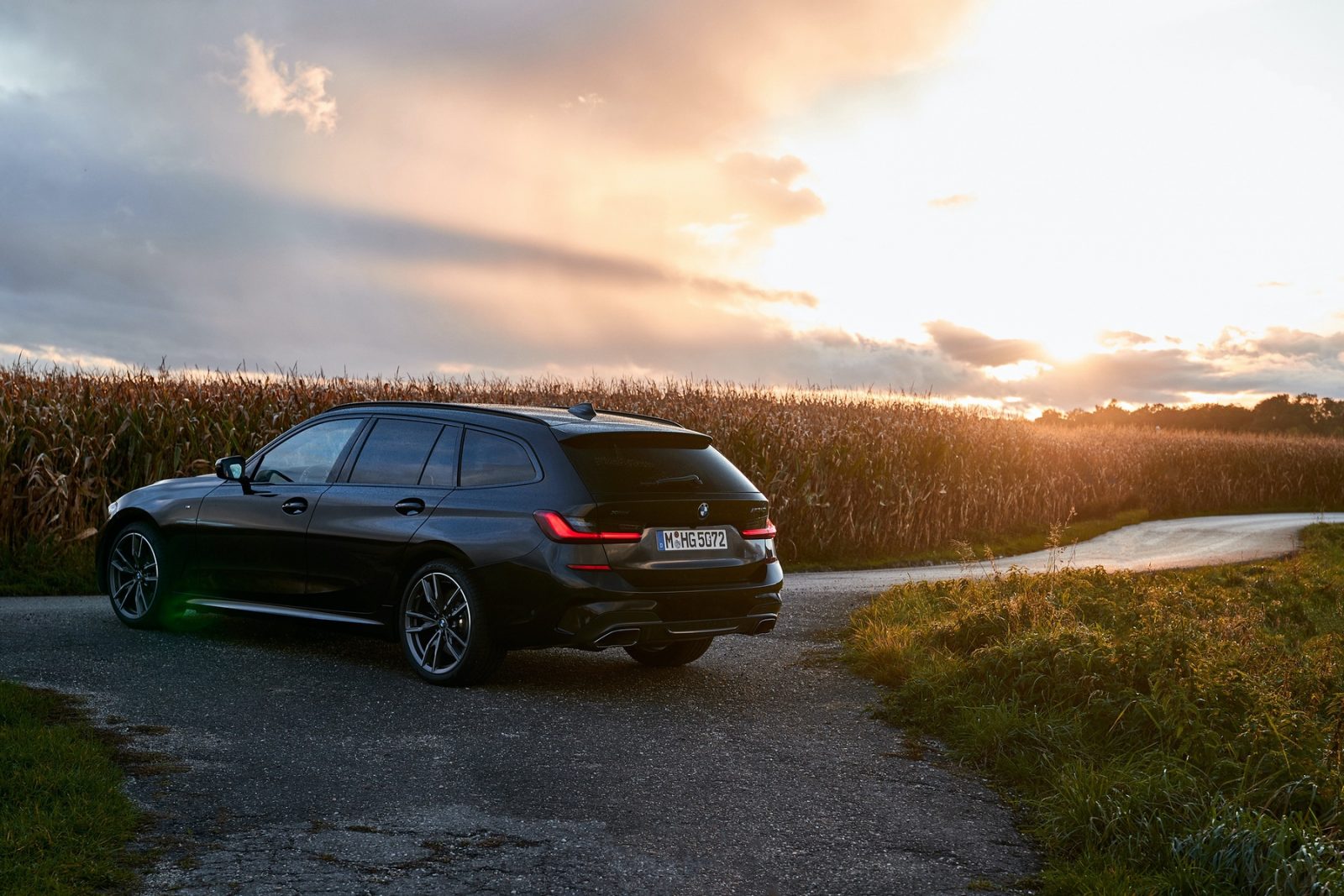 The new BMW 3 Series range has taken on a more sporting flavour than ever before, as the presence of two top-class athletes at the sharp end of the line-up clearly illustrates. From November 2019, the BMW M340i xDrive Sedan (fuel consumption combined: 7.4 – 7.0 will be joined in the range by the BMW M340i xDrive Touring . Powertrain and chassis technology developed with race track expertise from BMW M GmbH, distinctive design cues, exclusive standard specification and a cockpit created for the enjoyment of driving pleasure at its most intense treat those on board to a performance experience head and shoulders above anything else in the midsize premium segment. From November 2019, the Sedan and Touring models will also be available in BMW M340i First Edition guise. Limited to 340 units in each case, the First Edition will include particularly enticing design and equipment features.

The new BMW M340i xDrive Sedan and BMW M340i xDrive Touring represent a highly concentrated distillation of the sporting essence that enshrines the 3 Series as the definitive BMW and has set it apart from the competition for over 40 years. The original BMW 3 Series made its mark at launch in 1975 with its strikingly agile handling qualities. And the Touring model – which took to the stage for the first time with the arrival of the second-generation “3” – combined its trailblazing versatility with signature BMW dynamics. Powerful engines (most notably of the six-cylinder in-line variety), consistently upgraded chassis technology and the all-wheel-drive system first introduced on the 3 Series have been serving up a matchless driving experience ever since. 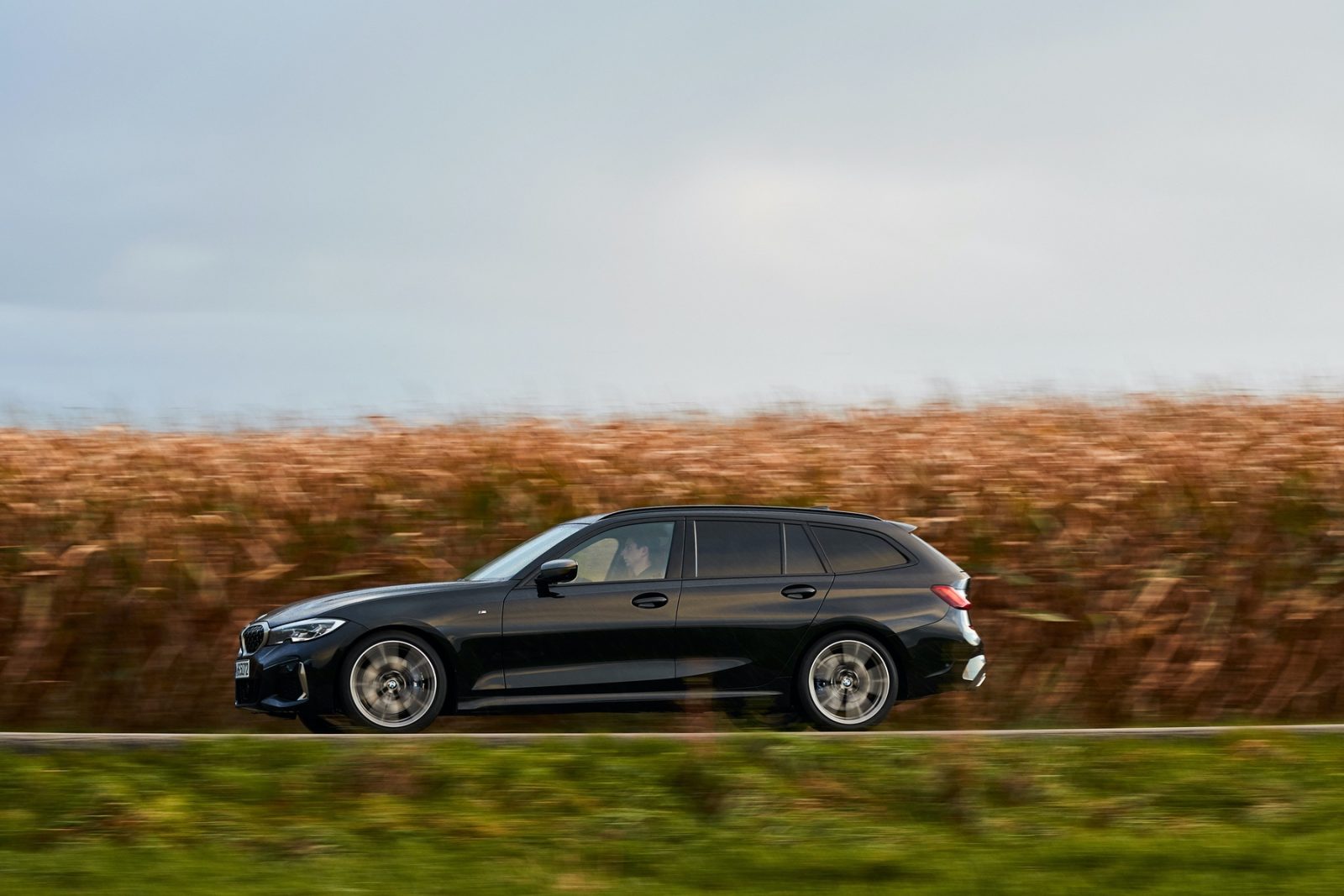 The six-cylinder in-line engine developed exclusively for the new BMW M340i xDrive Sedan and BMW M340i xDrive Touring stands out with its instantaneous power delivery and appetite for revs, combined with the smoothness for which BMW engines are renowned and unrivalled levels of efficiency for its output class. The 3.0-litre power unit features an aluminium crankcase with a closed-deck construction and a likewise alloy cylinder head. Weight-minimised pistons and con rods and a crankshaft made from forged steel increase internal engine efficiency. Frictional losses are reduced through a process known as ‘form honing’ for the cylinder bores in the crankcase and by means of their wire-arc sprayed steel coating.

The new straight-six generates 275 kW/374 hp, an increase of 35 kW/48 hp on the engine powering the previous range-topping models, while peak torque is up by 50 Nm (37 lb-ft) to 500 Nm (369 lb-ft). Its M TwinPower Turbo technology includes a twin-scroll turbocharger with indirect charge air cooling integrated into the intake system, latest-generation High Precision Injection direct petrol injection, VALVETRONIC fully variable valve timing and Double-VANOS variable camshaft timing for the intake and exhaust sides. Integrating the turbocharging system into the cast-steel manifold results in a remarkably compact design and, at the same time, means the exhaust flow only has to travel a short distance, allowing charge pressure to develop rapidly from low revs. The turbine’s responsiveness is further enhanced by a reduction in the mass moment of inertia of some 25 per cent. And a wide-opening, electrically controlled wastegate helps to keep emissions down. The maximum operating pressure of the direct injection system, with its cantilevered injectors, has been increased from 200 to 350 bar. This optimises fuel metering and minimises the engine’s emissions. 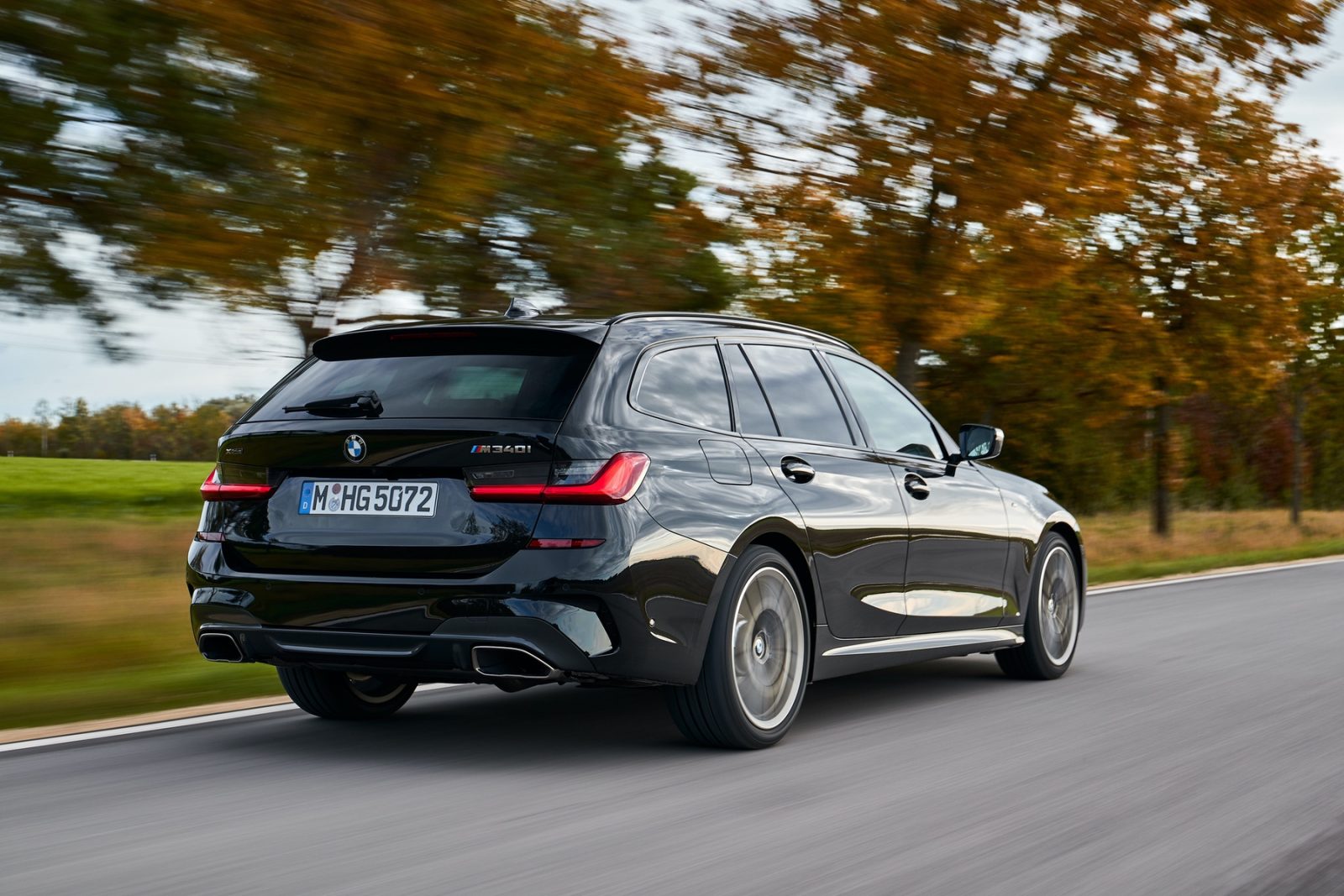 The highly efficient cooling system in the new BMW M340i xDrive Sedan and BMW M340i xDrive Touring keeps the engine, transmission and brakes at their ideal operating temperature not only in everyday driving, but also when the cars are pushed to their sporting extremes. It comprises a high-temperature and a low-temperature circuit, plus indirect charge air cooling. A split-cooling valve makes it possible to temporarily shut off crankcase cooling, thereby optimising warm-up behaviour. Also available as an option for the new BMW M340i xDrive Sedan is the M Technic Package, which adds two remote coolant radiators to meet the particularly high demands placed on temperature management at the outer limits of sporty driving – especially in high ambient temperatures. 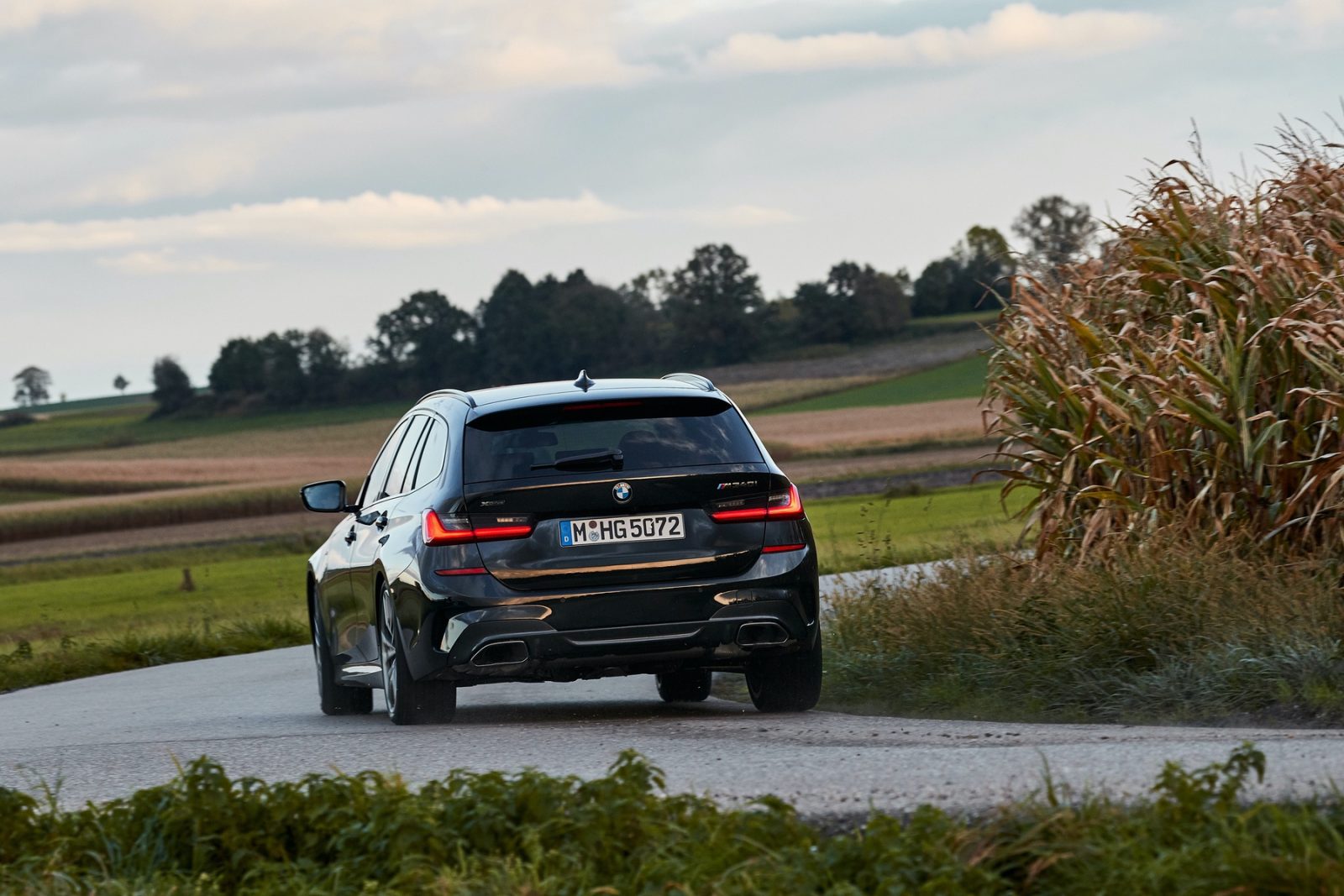 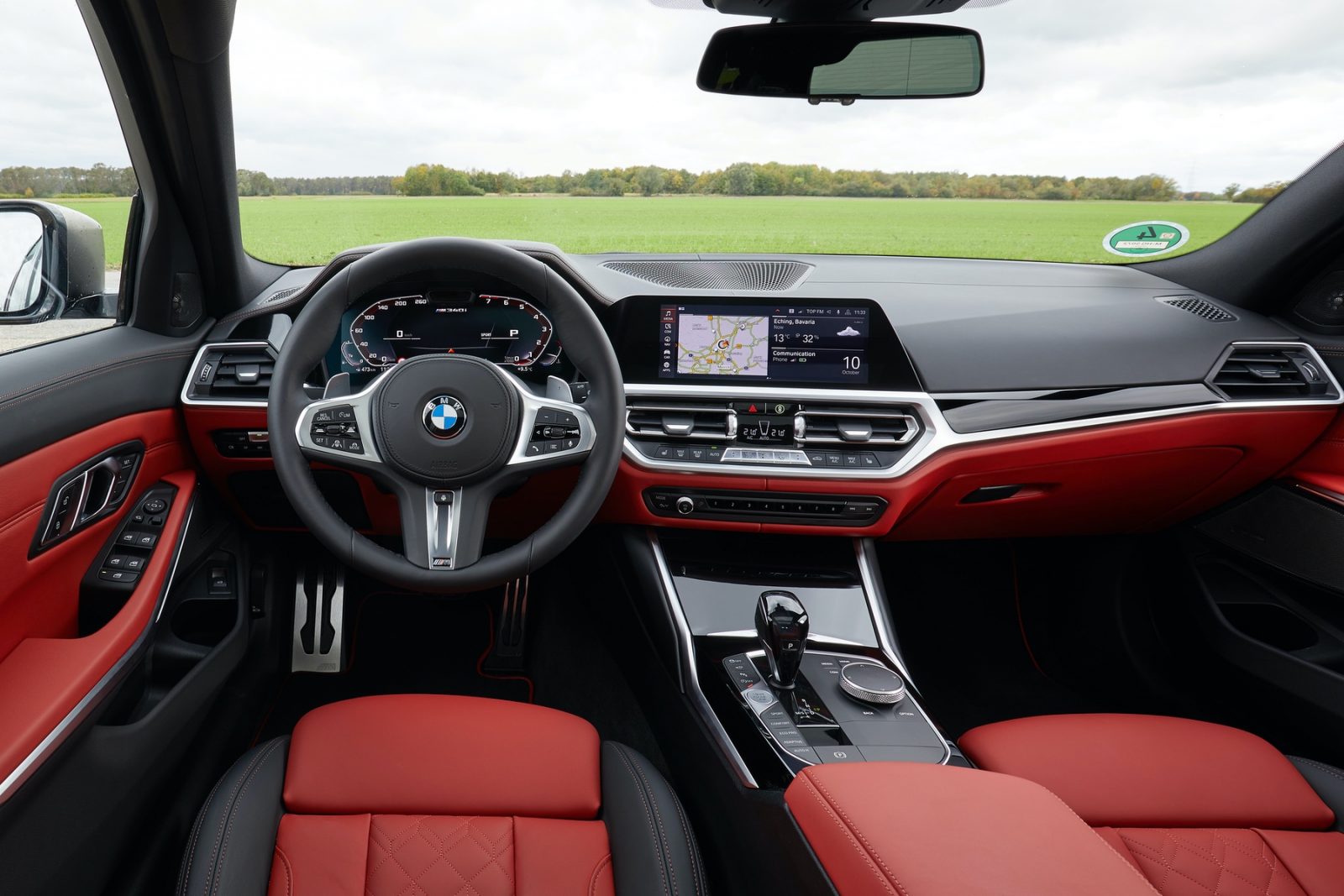 The new straight-six power unit teams up as standard with the latest-generation eight-speed Steptronic Sport transmission, standout features of which include an optimised hydraulic control system, low converter slip, effective damping of rotational irregularities and extremely sporty gear shifts. The ratio spacing is perfectly attuned to the engine’s performance characteristics, and so lends itself to pulsating bursts of speed, while enhancing both driving comfort and efficiency. The selector lever and standard shift paddles on the steering wheel can both be used to assume manual control of the gear selection process. There is also a Launch Control function for accelerating off the line with maximum dynamic intent.

The intelligent all-wheel-drive system in the new BMW M340i xDrive Sedan and BMW M340i xDrive Touring enables fully variable distribution of drive power between the front and rear wheels using an electronically controlled multi-plate clutch in the transfer case. BMW xDrive works in tandem with the DSC (Dynamic Stability Control) system and reacts to changes in the driving situation with great precision and in a fraction of a second, maximising traction, agility and handling stability in all weather and road surface conditions, and when the cars’ sporting capabilities are put to the test. The system’s rear-biased setup helps to produce the driving experience expected of an M car, and is especially pronounced with the Driving Experience Control switch set to SPORT or SPORT+ mode. The strategic apportioning of even more power to the rear wheels increases agility when turning into corners, in particular.

The new BMW M340i xDrive Sedan and new BMW M340i xDrive Touring are also equipped with the M Sport differential as standard. The electronically controlled, fully variable locking function in the rear differential brings about an appreciable improvement in traction and cornering prowess and also boosts directional stability and agility. The locking effect generated by an electric motor limits speed equalisation between the inside and outside rear wheel when cornering, allowing the driver to power out of bends with extraordinary dynamic verve. Governed by the DSC system, the locking function for the rear differential also improves traction and power transmission when driving on road surfaces with differing levels of grip for the left and right rear wheels by preventing a wheel from spinning when it is struggling for purchase. Together with BMW xDrive all-wheel drive, this ensures power is channelled onto the road to maximum agility- and dynamism-enhancing effect. 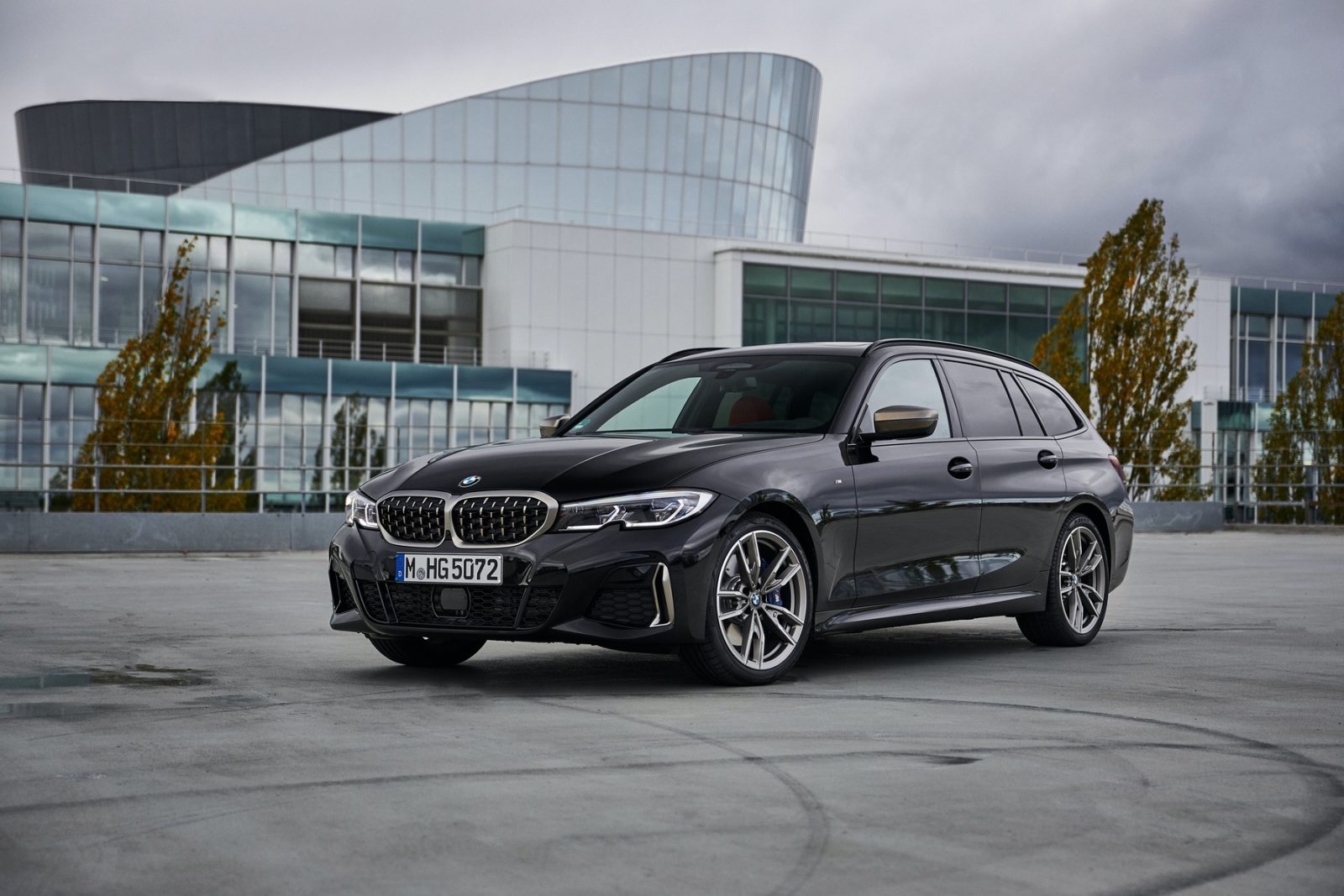 The chassis technology developed for the new BMW 3 Series range has all the tools to deliver extremely sporty handling characteristics. With their minimised weight and maximised rigidity, the components of the double-joint spring strut front axle and five-link rear axle sharpen cornering dynamics and steering precision, as do the wide tracks and optimum wheel camber settings. The M Sport suspension included as standard on the new BMW M340i xDrive Sedan and new BMW M340i xDrive Touring lowers their ride height by ten millimetres, and features M-specific elastokinematic properties and lift-related dampers. The damper control configuration making its debut in the new BMW 3 Series reduces body movement perceptibly when smoothing out vibrations caused by bumpy road surfaces and dynamic cornering. The result is sporty, authoritative handling. This setup adds extra hydraulic damping on rebound at the front axle and a compression-limiting system at the rear. It is continuously variable and adjusts the damper firmness progressively according to changing spring travel.

Customers also have the option of Adaptive M suspension with electronically controlled dampers. These dampers respond adaptively to road surface conditions and driving style in order to eliminate undesired body movement. To this end, the compression and rebound stages are both adjusted continuously and independently of one another. This enables finely metered spring and damping responses, supplying the driver with only relevant information about the road surface. Damping characteristics can be adjusted via the Driving Experience Control switch. SPORT and SPORT+ modes optimise the cars’ ability to provide dynamic handling, creating a noticeable contrast to the more comfort-oriented damper responses in COMFORT and ECO PRO modes.

Variable sport steering is another element of the M Sport suspension and Adaptive M suspension packages. Combining Servotronic speed-sensitive power assistance with a variable ratio that adjusts to changes in the steering angle, it helps to give the cars superb straightline poise while also lending itself to effortless low-speed turning and manoeuvring. The variable sport steering’s sharp, precise response enhances agility on turn-in, too. 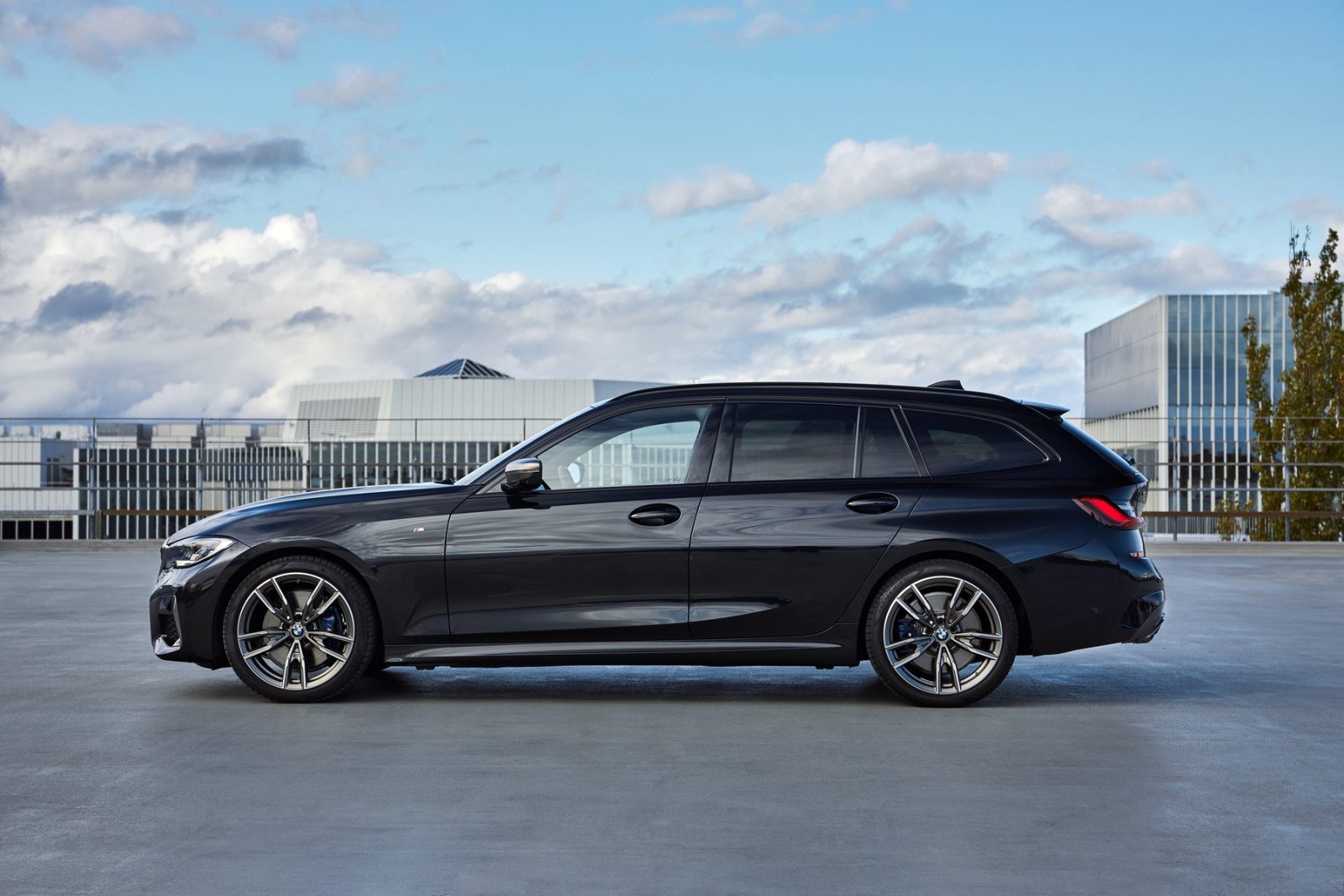 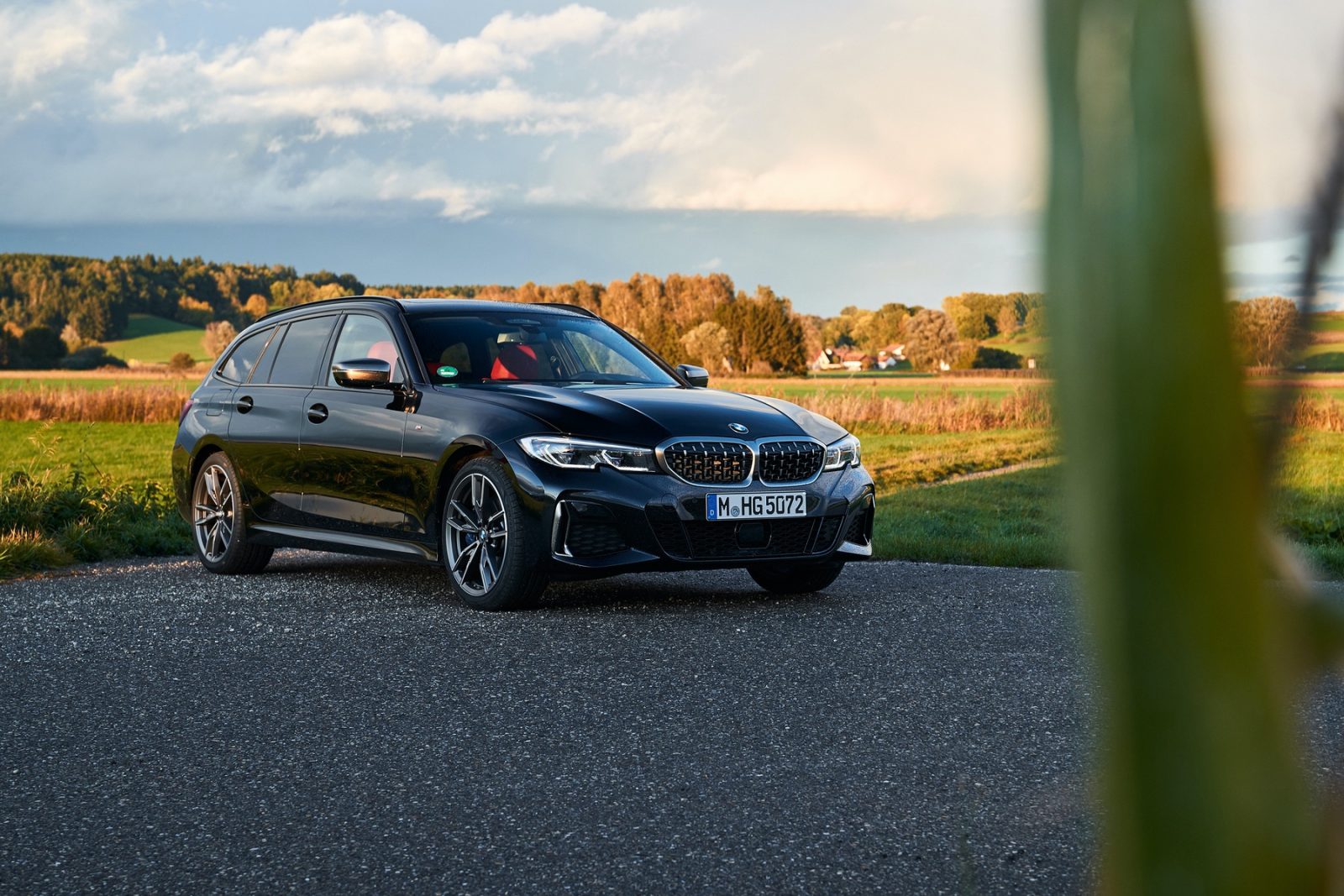 The new BMW M340i xDrive Sedan and new BMW M340i xDrive Touring waste no time in showcasing their superior performance qualities with a number of standalone, M-specific design features. The front apron, side skirts and rear end have all been crafted to optimise supply of cooling air and the cars’ aerodynamic properties. The bespoke design elements also include the mesh-design BMW kidney grille and trapezoidal exhaust tailpipes. The new BMW M340i xDrive Sedan also sports a body-coloured M rear spoiler. BMW Individual High-gloss Shadowline trim and the Cerium Grey metallic finish for the exterior mirror caps, the air intake trim in the front bumper, the surface of the BMW kidney grille mesh and its surround, the tailpipes and the model badge all add to the exclusive look.

M-specific design and equipment features inside both models help to focus the occupants’ attention on the dynamic driving experience laid on for them. Standard appointments include sports seats for the driver and front passenger upholstered in an M-specific combination of Sensatec and Alcantara with contrast quilting in Blue, an M leather steering wheel with multifunction buttons and shift paddles, a BMW Individual headliner in Anthracite, M pedals, M-specific floor mats and interior trim strips in Aluminium Tetragon with accent strips in Pearl-effect Chrome. ‘M340i’ lettering appears in the digital instrument cluster and also adorns the front door sill plates.

As well as their bespoke powertrain and chassis technology and model-specific exterior and interior design features, the new BMW M340i xDrive Sedan and BMW M340i xDrive Touring are also equipped as standard with three-zone automatic climate control (including separate control of the temperature and ventilation settings both for the driver and front passenger side and the rear passenger compartment), ambient lighting, extended storage and an automatically dimming rear-view mirror. Other items on the standard equipment roster for the high-performance siblings include Park Distance Control with sensors at the front and rear, BMW Live Cockpit Plus complete with navigation system and an 8.8-inch Control Display, and the Connected Package Plus including Real Time Traffic Information, Remote Services, Concierge Services and Apple CarPlay preparation. 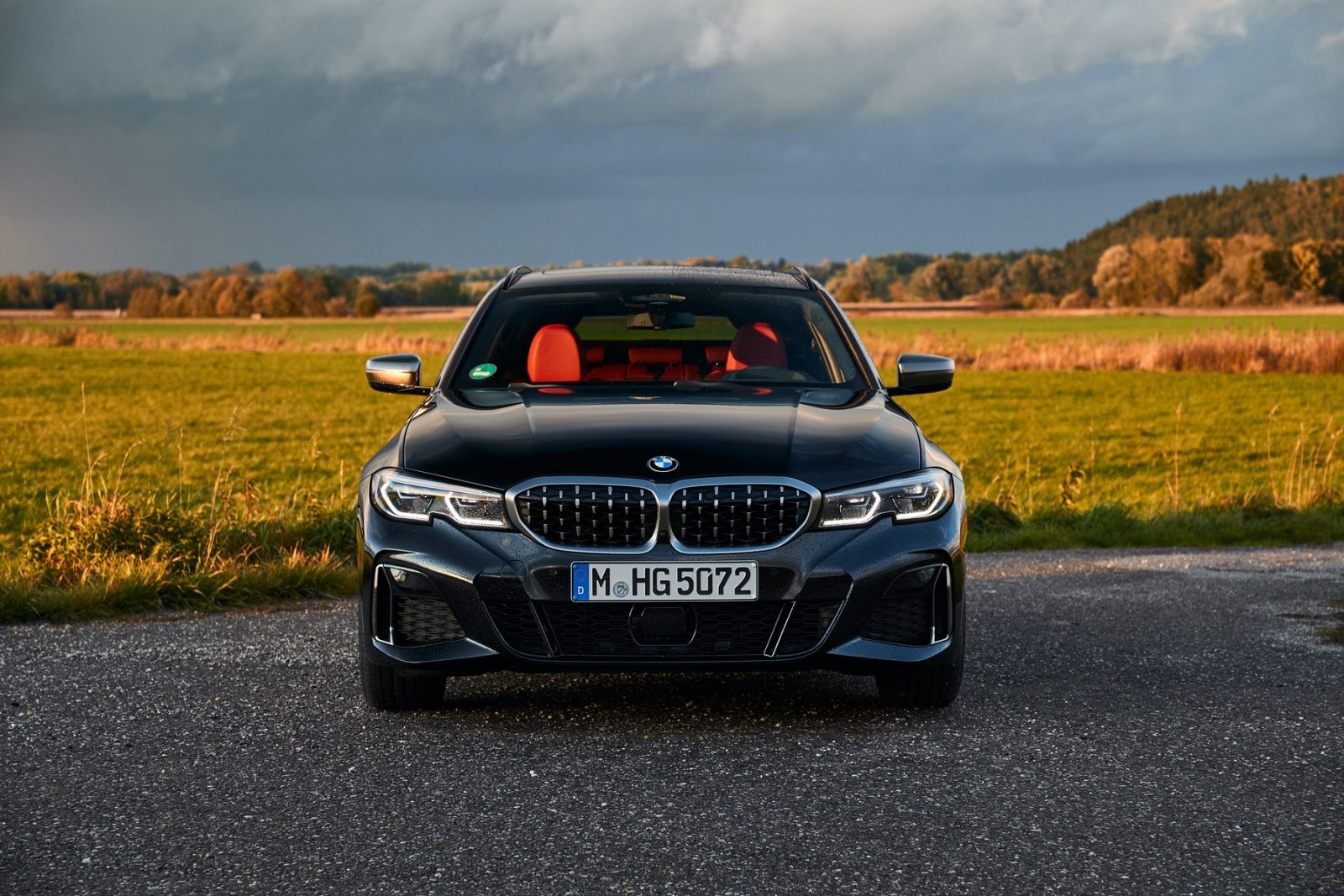 An exclusive special-edition version of the two range-topping models will also be offered from the launch of the new BMW M340i xDrive Touring in November 2019. The BMW M340i First Edition will be available in both Sedan and Touring guise and offered in selected markets – including Italy, Spain, Switzerland, the Netherlands, Scandinavia, Belgium, Australia, New Zealand, Japan, South Korea, the Middle East, Canada, Mexico and Brazil. The limited run of 340 units of each model version will come with a selection of exceptionally attractive design and equipment features.