Something odd happened recently when BMW invited the UK press to drive pre-production i3s. They tended to like it. Yes the jaded UK automotive press found the car rather interesting and dare I say it, fun. We’ll have our own first hand impressions of the i3 later this month and will be driving it later in the year. However until now, here’s a collection of the best pre-drive reviews:

In cutaway form, the first observation is simple: this car must cost serious money to build. Those ally extrusions, the magnesium alloy hanger for the dashboard, the carbon – which is cooked in the US and then shipped back to Europe, the rather lovely aluminium lower suspension arms – all of it yells euros. The tyres are weeny, low-friction Bridgestones just 155 in section and 19 inches in diameter.

BMW will not release pictures of the cabin until 29 July, which is a crying shame because I think it’s showroom gold. It re-casts the relationship between driver and controls in the cleverest way I’ve seen in years. People will sit in this car and want it. 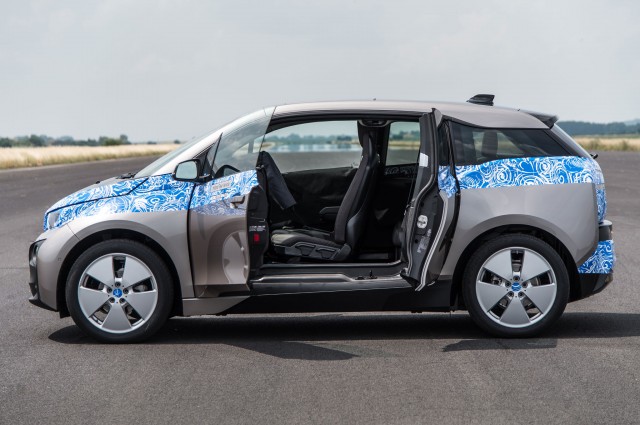 Getting going is blissfully simple. A little horizontal drum sprouts from the steering column, with biggish rocker switch marked D-N-R, plus a button (start-stop) and another button (park). Funnily enough the engineers call that rocker switch the ‘gearlever’, even though it’s not a lever and it does nothing to do with gears. All it does is switch the motor to run forwards or backwards. The transmission is a fixed single-speed reduction gear between the motor and the diff.

Assuming you want to depart forwards, you just press the start button, switch to D, and apply some accelerator. With utter smoothness, you roll away. There’s a distant synthesiser hum of the loudspeaker that warns pedestrians and cyclists of your motion, but barely any of the mechanical whines or electrical buzzes that most EVs can’t help emitting. Even in its first few metres, you’re struck how BMW had made the i3 sound refined and premium.

It’s ruddy sprightly too. That’s the lightweight part coming home to roost. With a high-torque 170bhp motor and a power flow uninterrupted by gearchanges, it’s at 62mph in 7.2 seconds. The addictive thing is the instant and proportional answer you get whenever you twitch your right foot. The same applies when you lift off, too. There’s strong regenerative braking from the motor even before you touch the brake.

The seamless power delivery and the braking effect of the energy recuperation system give the impression that the i3 will be a terrific city car, but it is the sheer agility that is the car’s defining characteristic. The lightweight structure and low-mounted batteries combine with rear-wheel-drive dynamics and a super-responsive driveline to produce a truly engaging drive. Given its overall size and tall stature, the i3 is easy to place, remarkably manoeuvrable and, crucially, fun to drive.

There is noticeable roll when you throw it into tightening corners at higher speeds, but it builds progressive and is easily tamed by a trimming of throttle. The tall but narrow tyres allow you to edge up to the point where grip begins to fade with a tell tale squeal with a fair deal of confidence before the DSC chimes in. 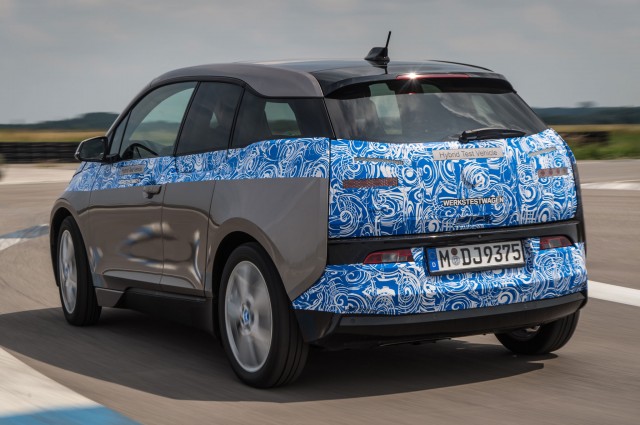 Power delivery is instantaneous, as you’d expect – all of the 184lb ft of torque is available from rest, after all – and in the most performance-oriented of the car’s modes, Comfort, you can easily squirt up to 40 or 50mph in refined haste.

It seems odd to say this, but the i3’s agility at speed is likely to surprise you. It’s a tall-looking car, after all, but its centre of gravity is extremely low thanks to the battery cells mounted in the base of the chassis. That means it has excellent change of direction at speed, and it also feels very secure under braking. Brake-energy recuperation alone can do the braking if you think far enough ahead in many situations, in fact.

Perhaps more relevant is a deeply impressive turning circle. The i3 feels astonishingly capable in tight spaces and, at 9.86m, its turning radius is almost a full metre less than a Mini Cooper’s. The steering is also pretty quick, at 2.5 turns lock to lock, so it should have excellent manoeuvrability around narrow city streets.

The i3 offers punchy and lively acceleration. A heady rush of acceleration is unleashed the moment you introduce the smallest degree travel to the throttle. It is delivered seamlessly with just a faint whirring sound from the electric motor and a distant rumble of specially developed low rolling resistance tires.

The benchmark zero-to-62-mph (100km/h) is achieved in a respectable 7.2 seconds. The initial urgency away from the line has as much to do with BMW efforts in keeping weight in check than the electric motor’s 184 lb-ft of torque, which by comparison’s sake is 7 lb-ft more than the turbocharged 1.6-liter gasoline engine used in the Mini Cooper S.

The new BMW i3 is also impressively responsive and sensationally refined at highway speeds, offering enough in-gear shove that you’re never likely to feel exposed when mixing it with other traffic. The silent surge of propulsion you experience on a loaded throttle comes at the expense of range and that initial urgency tends to trail off as speeds rise closer to the limited 93-mph top speed achieved in Comfort and Eco Pro modes.

BMW Working on Improving the Range of the i3

First Image of Production BMW i3

BMW to Advertise the i3 During the Superbowl