Official Release: The BMW Berlin plant today witnessed the last of a total of seven exciting vehicle production launches this year – a very special series production launch during the BMW Motorrad anniversary year. The new BMW R nineT rolled off the assembly line for the very first time. The model is reminiscent of the brand values from the meanwhile 90 exciting years of BMW Motorrad history. The start of production was witnessed by employees, friends of the company and celebrity guests such as Horst Lichter and Ronald Zehrfeld, as well as customizing specialists from Urban Motor, boxer-fans from Motorcircus and journalists from all over the world.

At midday, the first three fully assembled bikes passed through an extremely crucial point at the BMW Berlin manufacturing facility – the roller dynamometer, where no less than 1,000 parameters are tested within the shortest time and where around 100 spectators were present at the start of production. 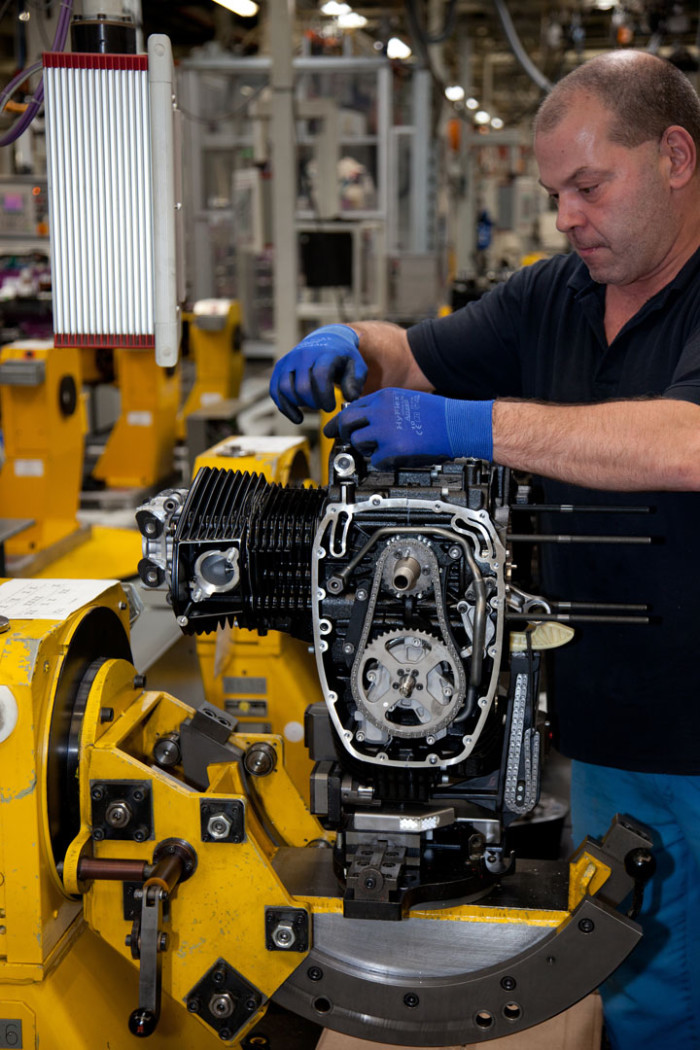 The entire project team has completed two and a half years of development work, from the original concept up to series maturity. “During the initial phase, our designers had already sat together with vehicle developers from Munich“, explains Dr. Marc Sielemann, head of production at BMW Motorrad. “So we were able to incorporate production-related aspects into the concept at a very early stage, thereby ensuring the quality of our manufacturing processes.”

BMW Motorrad chief Stephan Schaller congratulated his team on their achievements and on a unique motorcycle that sets a new benchmark at BMW Motorrad in terms of diversity and customizing. The guests present in Berlin were able to convince themselves personally of this. Within an authentic “workshop” setting, project manager Roland Stocker and his team demonstrated that the R nineT can take on an entirely new and individual character with little effort and a wide range of accessories. 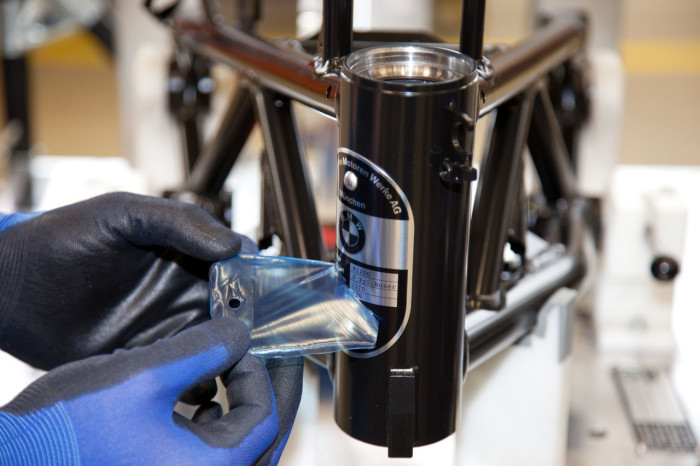 During a guided tour of the plant following the fulminant vehicle presentation, the guests gained exclusive insights into the process of assembling the BMW R nineT. This is where attention to detail becomes evident on the bike. For example, the aluminium nameplate is riveted to the steering head of the vehicle, this being a style element, the design of which was inspired by historic BMW motorcycles.

During 14 assembly cycles and further pre-assembly places, 21 employees ensure that motorcyclists with a passion for the classic bike experience riding pleasure on a genuine BWW. Due to the decision to opt for the classic air/oil-cooled boxer engine, two different boxer power units are now produced parallel to each other at the Berlin plant for the first time. The engine known from the BMW R 1200 GS was replaced by an air/water-cooled boxer engine with the introduction of the new edition of this model.

The aluminum tank of the R nineT is proof that people at the BMW Berlin plant are well able to cope with challenges. The tank’s high-quality look is achieved by a black lacquer finish combined with hand-brushed, clear-coated aluminum surfaces. In order to ensure the required adhesion of the clear lacquer to the aluminum surface, specialists at the Berlin motorcycle plant developed a special transparent dispersion. This transparent film serves as a bonding coat between the aluminum surface and the clear lacquer – a technological innovation that makes the exciting design of the nineT possible.

Video: A Look Inside the BMW Motorrad Berlin Plant