It’s a sunny 60 degrees as we climb into our chariot of the afternoon. Our car is BMW’s answer to the question that would have seemed insane 15 years ago. Can I buy a vehicle that seats five, goes to 0-60 in under four seconds and weighs at least 5,000 lbs.? Of course you can. Enter the 5185 lbs BMW X6M. Freshly redesigned and reinvigorated for 2015.

The eye rolling you might be doing right now may be warranted. But driving the X6M you quickly realize that your personal tastes are irrelevant to the machine underneath you. For the X6M goes about the business of being utterly fast so effectively that it erases any doubts about legitimacy. Unlike the previous X6M (and its identical twin the X5M), this new completely redesigned 2015 model has been crafted by BMW M from the very beginning of its development. 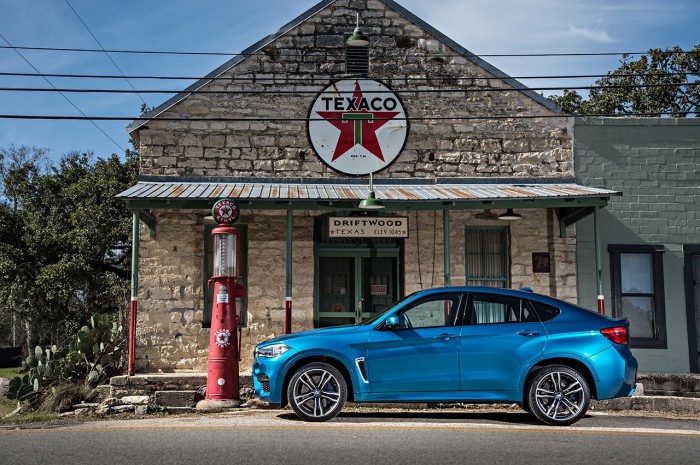 It’s a little known secret that the very first X6M was initially developed by BMW engineers before being handed off to their M counterparts for the final magic from Garching. At the time there simply wasn’t bandwidth at M (nor the time) for the standard M process. The results weren’t bad of course. We’ve reviewed the previous generation several times and always came away generally impressed. But it doesn’t take many miles behind the wheel of the 2015 X6M to recognize the difference in development tactics.

With more time, better planning and the pressure of increased competition BMW M approached the new X5M and X6M in typical fashion. The numbers alone tell only part of the story. Yes power and torque are up (20hp and 53 ft lbs respectively) and weight is down almost 150 lbs. This allows the X6M to sprint to 60 in 4 seconds flat – .5 faster than the previous model. 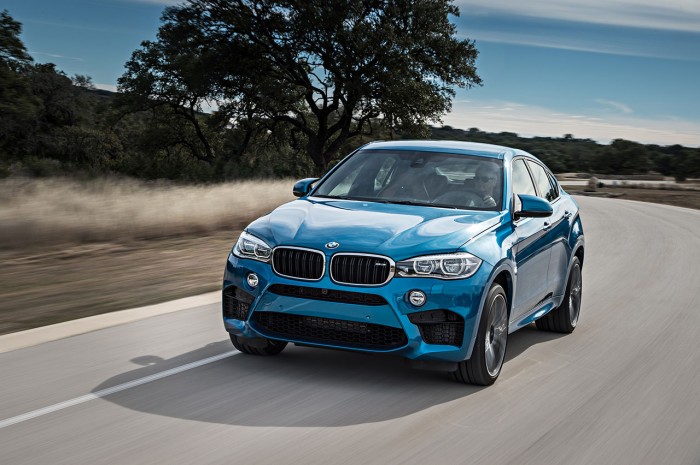 Like the best M products over the years the new X6M isn’t defined by straight-line speed. Its character is defined by the thoroughness of the engineering process and an overall feel. Yes, this is a BMW crossover that feels like an M product – noticeably more than the previous iteration.

Case in point there are now ten radiators, five cooling pumps and five individual cooling circuits. As much as the X6M will likely not see track day service, M engineers felt obligated to give it the ability to hit the same track day benchmarks as a typical M car. The results are reportedly four unbroken laps at the Nurburgring without breaking a sweat. For anyone who’s driven the ‘Ring, you know how big of a deal that is for a 5,000 lbs vehicle.

The components that make the new X6M are largely hidden from view but felt immediately on the track. The large rotors (with decidedly more contact from the larger calipers) are both lighter and better cooled than before. Then there’s the suspension components which are some of the beefiest pieces of aluminum and steel I’ve ever seen outside of a racetrack. Additionally M dramatically stiffened the rear and added stiffer bushing throughout to allow for better control and more feel at the limit. It creates a car that, while not at home on the track, isn’t entirely out of its element. Lap after lap on the Circuit of the Americas the X6M accelerated, braked and carved through the corners with the kind of confidence that frankly makes no sense given the size and weight of the thing.

And that’s just it. This thing makes no sense. Lets step away from the hyperbole for a second and think about what this four door crossover hatchback is. The standard X6 defies classification to a degree. But the X6M goes a few levels further and delivers performance that would have put it in the super car category 15 years ago. Of course it has comfort and convenience. Of course it has a powered lift gate and more cupholders than seat belts. This is the ultimate go anywhere and do anything chariot. 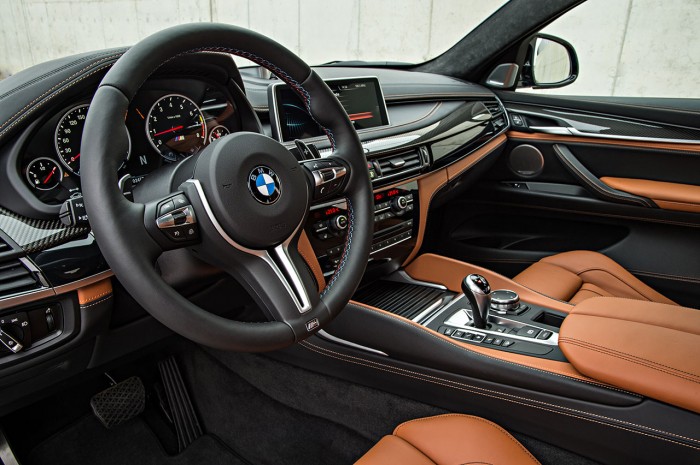 Go anywhere is exactly what we did once settled in behind the wheel of the X6M. This more than any other M car is meant to devour miles with as much speed and as little fatigue as possible. But M hasn’t forgotten to endow the X6M with the appropriate M character. The shifter that controls the revised 8 speed ZF automatic has been designed to mimic those found in the DCT equipped M cars in that there’s no creep in “D.” Further the throttle blips on downshifts feel nearly as quick as those in the DCT equipped M4 we had just driven, as were the upshifts for that matter. It’s amazing to see the venerable 8 speed continually get better year after year. We’re not sure if the X6M will be the pinnacle, but we can’t imagine it getting much closer to the experience of a DCT at this point.

Performance is clearly the other key ingredient to M status. The X6M is supremely capable in straight-lines thanks to it’s revised xDrive traction and 567 hp. But it’s the torque and the addition of the 8 speed (replacing the old ZF 6 speed) that
553 lbs of torque that helps it rip through the speedometer noticeably quicker than the old X6M. 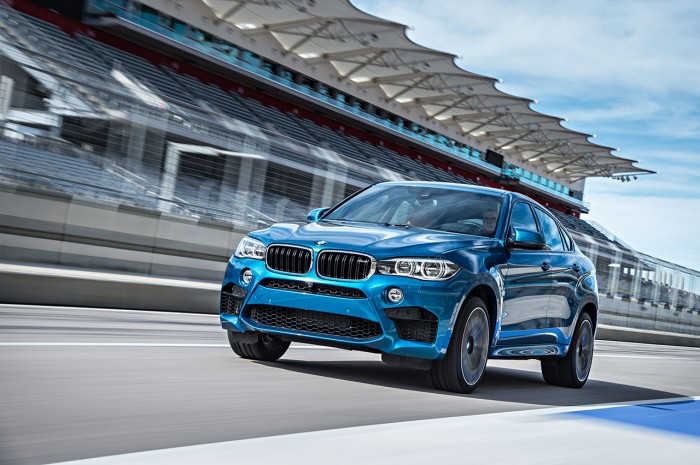 Turn in on the road and at COTA was one of the more surprising things about the X6. Credit increased camber angle in the front along with the partial re-think of the suspension geometry. Adding to this was the re-worked the xDrive system along with other dynamic controls giving better traction and quicker responses. But the real hard work was taking weight out of the car which M did with increased use of aluminum in key unsprung areas.

At COTA there were two limiting factors which we’re sure you could guess: brakes and weight. That said brakes didn’t fade as bad as you’d expect but simply felt well used by the time our track time was done. Interestingly M did look into Carbon Ceramics with the X5 and X6M. However the take-rate combined with the real need (how many people are really going to track these things) made it less of a compelling investment for M. The other limiting factor – overall weight – was hard to get past at times. As much as BMW reduced the baseline weight of the X6, and M pushed it even further, we’re still talking about a 5,000 lbs vehicle going from 150 mph on the back stretch to a 3rd gear corner at turn 12. But the mass of the X6M was well hidden on the fast sweepers and few other corners we had expected. 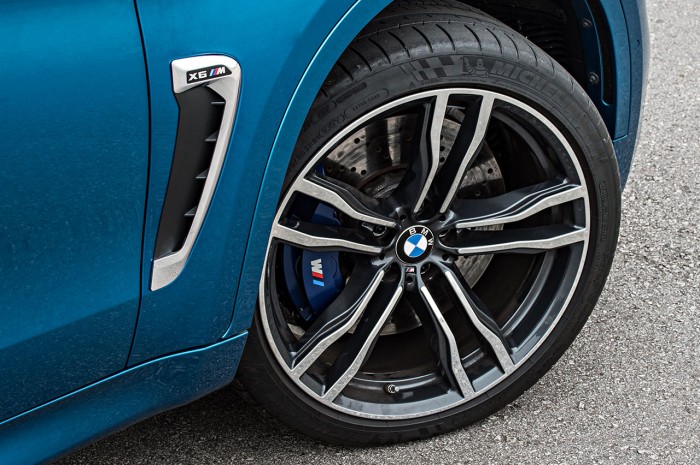 As with the carbon ceramic brakes, M looked at an M4 and M6 style carbon fiber reinforced plastic roof to help shave weight. However the cost vs take rate would have likely been an issue. Or put another way, how many X5s and X6s do you see without sunroofs?

Our day ended with one final stint behind the wheel of the X6M at COTA. With the sun setting to our right and heading up the hill one more time we couldn’t help but remember the last time we were at a track with the X6M. It was Laguna Seca five years ago at the launch of the first generation. At the time we couldn’t get past the feeling that M did an admirable job of creating a 5,000 lbs SAV and making it perform the impossible. But it had a whiff of a cash grab to it. And as you can imagine the X6M (and X5M) sold exceptionally well in places like the Middle East, Russia and of course the U.S. But the new X6M is cut from a different cloth. Yes it’s bound to appeal to some of those same demographics and sell well in the same markets. But this X6M has a level of substance that was absent previously.

There’s honor in the M badge. And yet we’ve seen it all too often liberally applied to the steering wheels and trim pieces of BMWs that never deserved it. X6M isn’t one of those cars. 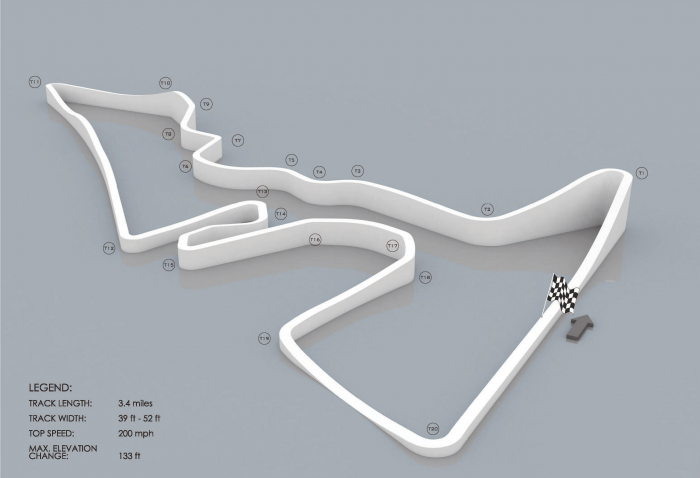