As evangelized in [Back to the Future Part II](http://www.imdb.com/title/tt0096874/), 2015 is supposed to be the year of hoverboards and flying cars (Note: If you don’t know what we’re talking about, stop reading this post and go watch the entire BTTF series now). Sadly, 2015 will probably not be the year of flying [DeLoreans](http://en.wikipedia.org/wiki/DeLorean_DMC-12), or more appropriately, flying BMWs. With that in mind, we asked our readers last month in [what ways could MINI – and by extension BMW – innovate](http://www.motoringfile.com/2015/03/17/opinion-how-could-mini-innovate/). Coming with up with a tangible answer on such an open-ended question is difficult, but Morgan Stanley Analyst Adam Jonas has provided a context that could help us think further about this matter.

Mr. Jonas believes that the sharing economy and autonomous driving are the forces shaping the automotive industry for the near future. He illustrates his concept of “shared autonomy” in a simple and elegant chart: 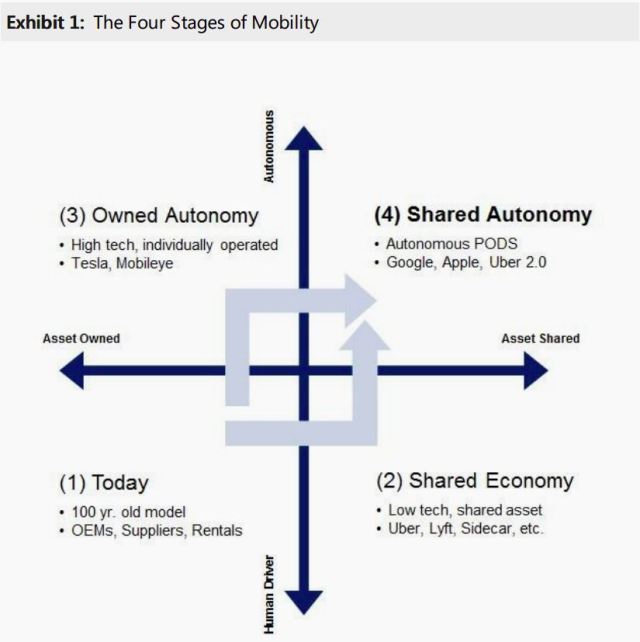 – The horizontal axis describes the transition from individual to shared vehicle ownership, while the vertical axis outlines the transition from human to autonomous driving
– The first quadrant corresponds to the current state of the car industry, characterized by 35 automakers competing globally and low vehicle usage (i.e. one hour per day on average)
– The second quadrant shows the beginning of a revolution, where individuals have started to move away from car ownership in favor of ride-sharing services like Uber. At maturity, these services are “so cheap that only rich people own cars”
– The third quadrant describes a time where drivers are able to release the control of their vehicles to computers
– The last quadrant is Jonas’s shared autonomy of “roving fleets of completely autonomous vehicles in operation 24 hours a day, available on your smartphone”

This last phase is truly fascinating and closer to reality than we might think. While the technology to achieve this vision is ramping-up at a rapid pace, the legal and security frameworks needed to make this possible will be the biggest obstacle. Aside from that, some of the benefits of this setup cannot be overstated; the cost of travelling from A to B will be marginal, death on roads will be drastically reduced, and traffic could become a thing of the past.

On the other hand, where does it leave enthusiasts like us? It sounds like human-driving will become highly restricted and cost-prohibitive. Also, what does it mean for premium/specialty car manufacturers like BMW? During one of the latest episodes of the excellent [a16z Podcast](http://a16z.com/tag/podcasts/), [Marc Andreessen](http://en.wikipedia.org/wiki/Marc_Andreessen) depicts a future where fleets of self-driving cars will be owned by hedge-funds: “they will spend a billion dollars on a fleet of self-driving cars and bid-them out to services like Uber and Lyft” ([27:50](http://soundcloud.com/a16z/a16z-podcast-securitys-painful-prominence-and-why-there-is-no-turning-back-with-marc-andreessen)). What kind of cars do you think a hedge-fund manager will get? A mass-market brand or a niche product? Startup L. Jackson has the beginning of an answer:

The car of the future will be owned by fleet managers, summoned by Ubers, driven by robots, & feel like a train. Where does Apple fit there?

iPhone 5 and What it Means for BMW