The curtain is up and today we have a new BMW model upon us. The long awaited BMW X4 is the little brother to the X6 and the sporty crossover many of you have been waiting for. While it gives up some flexibility in rear cargo room to the X3 is brings a sleek silhouette and a slightly more aggressive look. We’ll have much more on the new X4 in the coming days but until then read on for full pricing, technical details and plenty of photos.

Official Release: BMW today confirmed the all-new BMW X4 Sports Activity Coupe, a new dimension of the mid-sized premium Sports Activity Vehicle. Like the X6 before it, the BMW X4 combines the performance and capability of a premium Sports Activity Vehicle, with the style and elegance of traditional coupe. In the US, the X4 will be offered with a choice of two TwinPower Turbo engines. The X4 xDrive28i, with a Manufacturer’s Suggested Retail Price of $45,625 (including destination and handling), will feature BMW’s award-winning 240 horsepower 2.0-liter four cylinder while the top-of-line X4 xDrive35i, with an MSRP of $48,925 (including destination and handling) will feature BMW’s venerable 300 horsepower 3.0-liter inline six. Both models include an 8-speed Steptronic sport automatic transmission with shift paddles as well as xDrive, BMW’s intelligent all-wheel drive system.

The 2015 BMW X4 will make its world debut at the New York International Auto Show in April and begin production this spring exclusively at BMW’s US production facility in Spartanburg, South Carolina. 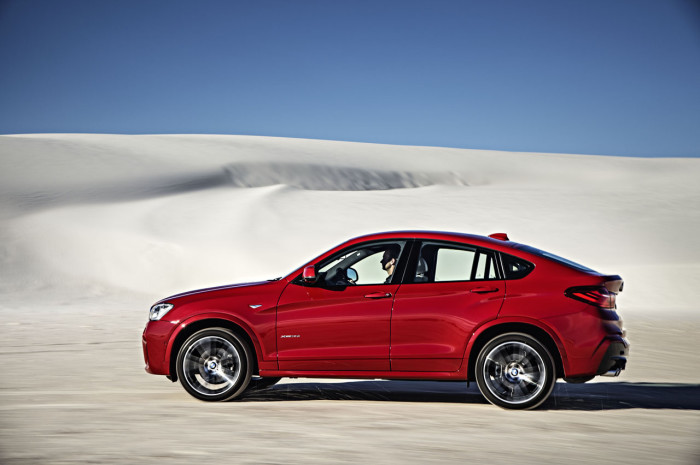 A unique expression of The Ultimate Driving Machine

Compared to its stable-mate, the BMW X3, the newest Sports Activity Coupe reveals a dynamic personality all its own and an even more ebullient character. At 184.3 inches (4,680 mm) in length, it is 0.6 inches (14 mm) longer than the X3, but is also 1.5 inches

(37 mm) lower (height: 63.9 in./1,624 mm) and cuts a persuasive figure with its perfectly balanced proportions and distinctive character. The large air intakes positioned on the outer edges of the front facia and the precise character lines in the front apron lend the X4 a more muscular appearance. This lowers the car’s visual centre of gravity closer to the road, signalling its sharper dynamics. The effect is further enhanced by the LED foglights located below the signature twin round headlights, an arrangement that defines the striking face of every BMW X model.

The coupe-like roofline of the BMW X4 reaches its highest point over the front seats, reflecting the traditional driver focus of every BMW, before dropping gently down towards the trailing edge of the tailgate. These stretched lines underline the sporting coupe character of the X4. The unique design of the BMW X4 is further reinforced by the fresh interpretation of the signature swage line running along the flanks of BMW models which, for the first time, is split into two. The first section rises smoothly from the front wheel arches to the rear door handles, highlighting the dynamic ability of the new BMW X4, while the second part accentuates the powerful sculpting of the rear fenders. The contoured C- pillars – complete with muscular shoulders – represent a continuation of the theme, as does the broad and low-set rear end, which reminds the driver and passengers of the performance potential served up by the new BMW X4 before they even climb aboard. 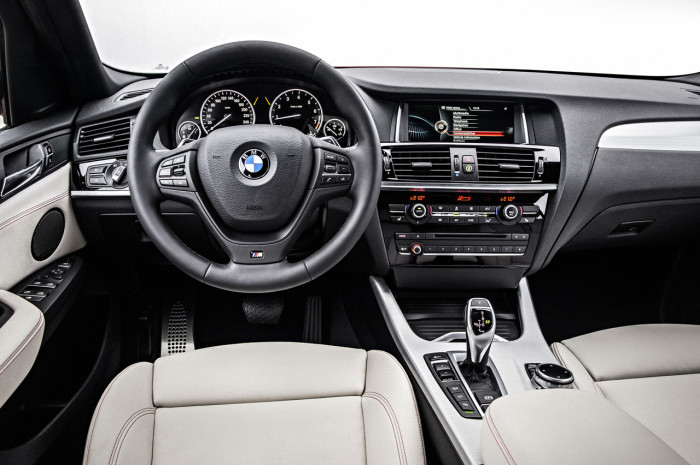 The interior of the new BMW X4 reveals a synthesis of sportiness and exclusivity. The X4’s body is mounted 1.5 inches (37 mm) lower than that of the BMW X3. The driver and front passenger sit 0.8 in. (20 mm) lower and the rear passengers 1.1 in. (28 mm) lower, creating the feeling of a classic sports coupe. It is a sensation reinforced by the rear seat bench, which comes with the type of continuously moulded side bolsters normally only provided by two individual seats, but still offers space for three passengers. Equally impressive is the load capacity available, 17.7- 49.4 cu. ft. (500–1,400 liters), which can be used in a wide variety of ways thanks to the standard 40:20:40 split rear seat bench. Everyday usability is enhanced even further by the standard power tailgate. It is available with the extra convenience of the optional Smart Opener, which allows it to be opened with a movement of the foot. All X4s include BMW’s iDrive Controller and central display. When equipped with the available on- board navigation system, the new BMW X4 receives the new iDrive Controller with touchpad, which allows drivers or passengers to use their finger to write letters for text inputs, such as a navigation destination, for example.

The premium quality and exclusivity of the interior are underlined by selected materials, subtle electroplated accents, a high-gloss black-panel look and aluminum trim strips in the wood panelling. The unmistakable character of the BMW X4 is further highlighted by a level of standard equipment even more generous than that found on the BMW X3. All X4s include the aforementioned power tailgate as well as a sports leather steering wheel with shift paddles, variable sport steering, Performance Control and rear Park Distance Control. 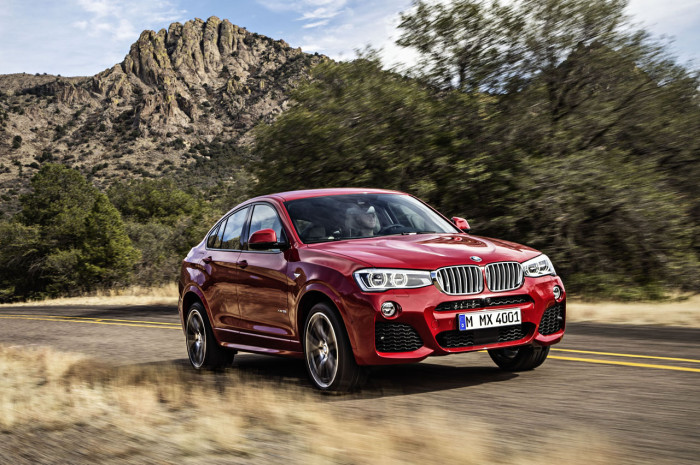 In addition to the broad-based and high-quality selection of different colors, light-alloy wheels, upholstery variants, interior trim elements and trim strips for which BMW is renowned, the xLine equipment package gives BMW X4 customers the chance to shine an even brighter spotlight on the X character of their car.
Powerful and refined BMW TwinPower Turbo engines. 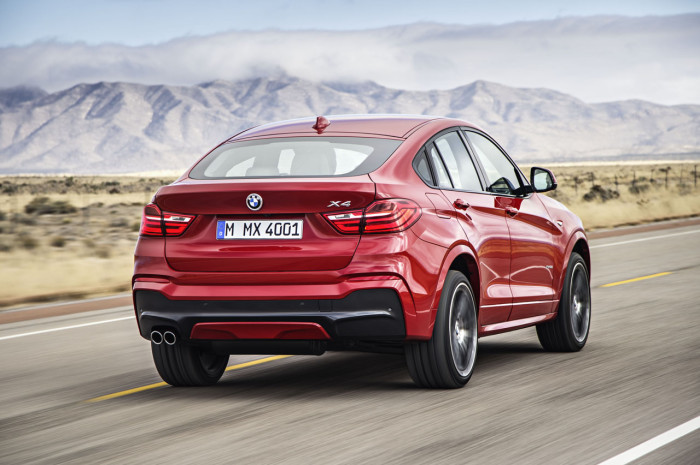 High Precision Direct Injection, Double-Vanos variable camshaft control and Valvetronic fully variable valve timing. These technologies join forces to provide the high-revving character for which BMW is renowned, along with excellent power delivery, refinement – and impressive efficiency. Drivers with sporting ambitions will appreciate the top-of-the-line X4 xDrive35i. Its 3.0-liter inline six conjures up maximum output of 300 hp between 5,800 and 6,400 rpm and peak torque of 300 lb-ft (400 Nm) at 1,200–5,000 rpm. That’s enough to power the

All X4 models have a sporty suspension set-up and come standard with xDrive, BMW’s intelligent all-wheel-drive system. Performance Control is standard on the X4. It uses the Dynamic Stability Control system to direct power to the outside rear wheel when cornering which improves traction, turn-in and directional stability. Working in tandem with the standard variable sport steering, these systems allow the BMW X4 to deliver driving dynamics that one would expect of The Ultimate Driving Machine. An xDrive status display in the Control Display uses three-dimensional graphics to keep the driver informed of the car’s body roll and pitch. If the navigation system is specified, a compass display in the instrument cluster is included. 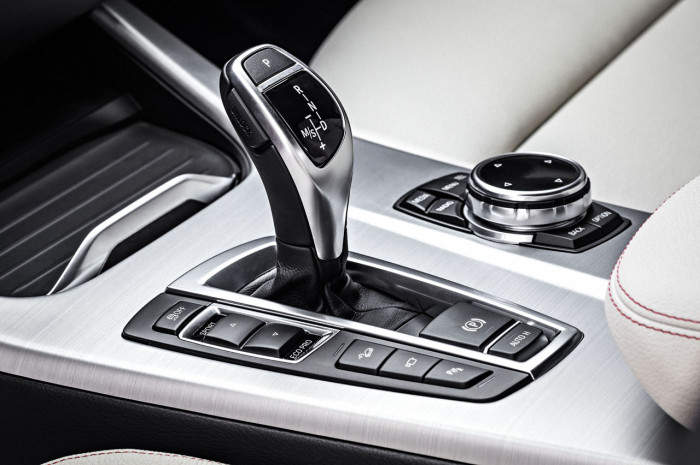 Further reductions in fuel consumption can be achieved courtesy of ECO PRO mode (selected using the Driving Dynamics Control switch), the ECO PRO Route option and the eight-speed Steptronic transmission’s coasting function. ECO PRO adjusts all of the on- board systems for maximum fuel efficiency. It includes a coasting function which shuts off fuel when the driver lifts off the accelerator. It also provides tips to the driver that would help to drive in a more efficient manner. The payoff is shown in the central display which shows how much further the BMW X4 can be driven on the gasoline available in the tank. With the available navigation system, the ECO PRO Route option prompts the driver to select and follow the route to the chosen destination that would use the least amount of fuel. The X4 also features BMW’s auto start/stop function which shuts of the engine when the vehicle comes to a stop in order to avoid wasting fuel when the X4 would otherwise be needlessly idling. 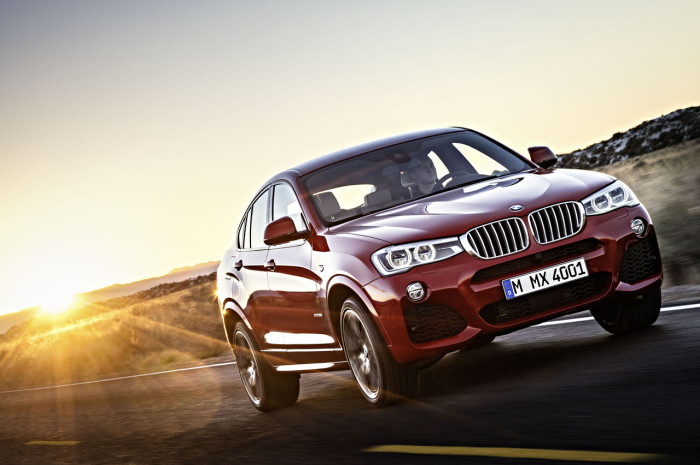 The innovative BMW Proactive Driving Assistant offers additional potential for fuel saving. This technology uses route data supplied by the car’s navigation system to identify situations in advance which will require the car to slow down – e.g. on the way into towns and villages, speed limits etc. – and give suitable recommendations. 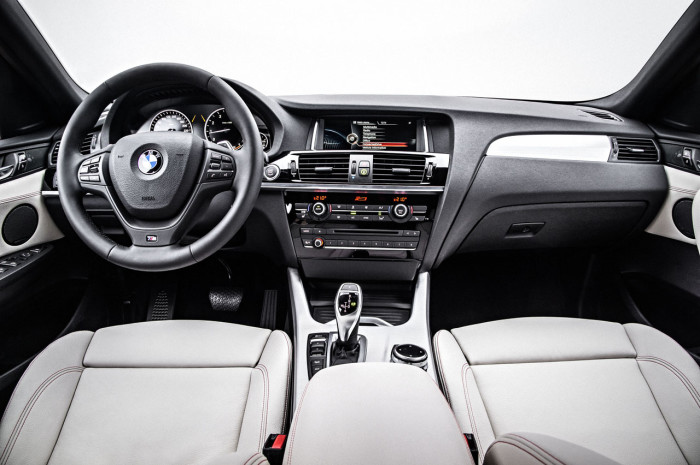 Providing added safety and greater convenience in the BMW X4 is the optional full-color Head-Up Display, which projects all important driving information and assistance systems displays into the driver’s field of view in high resolution. What’s more, the latest-generation Navigation System with ECO PRO route guidance now teams up with the iDrive Controller with touchpad. Mounted on top of the controller, the touchpad allows texts – e.g. a navigation destination – to be easily input using a finger. Included with the Navigation System in the US is Advanced Real Time Traffic Information (ARTTI). ARTTI includes a full- color graphic that shows the flow of traffic on major roads and can offer route detours to help avoid traffic jams along the selected route.

The array of available driver assistant systems provides an added measure of active safety. Active Driving Assistant + Active Cruise Control with Stop & Go includes Pedestrian and Collision Warning with City Braking function as well as Lane Departure Warning. Also available as options are Active Blind Spot Detection and rearview camera with
Surround View which provides a bird’s-eye view of the area around the BMW X4. The available Parking Assistant steers the X4 into parallel parking spaces after alerting the driver to a space large enough for the vehicle. 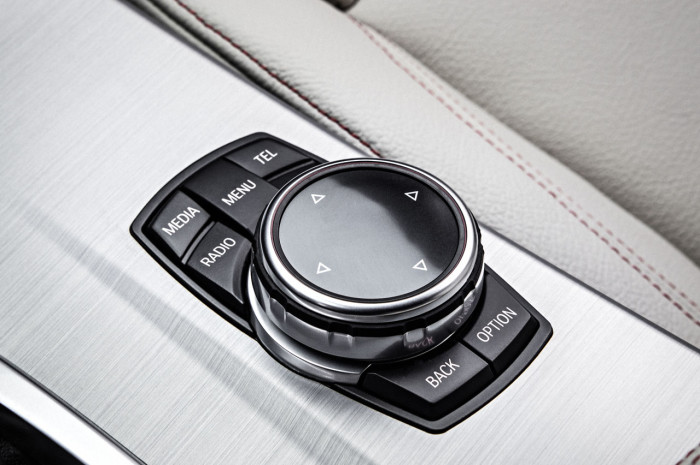 ConnectedDrive Services allow customers to access embedded service as well as select smartphone applications. The available Concierge Service connects the car with a BMW Call Center, providing real-time help with services as varied as making a restaurant reservation or finding the nearest 24 hour pharmacy. The BMW Assist eCall function, meanwhile, takes safety to another level. It is triggered automatically or can be used manually. As soon as the crash sensors report an airbag deployment, the system sends the precise vehicle location and all key information, including an assessment of the likelihood of serious injury, to the BMW Call Center via the built-in SIM card, thus enabling fast and effective assistance at the accident location. BMW Assist eCall as well as BMW Teleservice is standard in every BMW X4, with service included for ten years at no additional charge.

With BMW Apps, select third party apps may be accessed and operated using the iDrive Controller and display. Apps which are integrated today using an iPhone include Pandora, Stitcher, Audible, Rhapsody and TuneIn as well as the Amazon Cloud Player.

The BMW X4: The next Sports Activity Coupe

The BMW X4 offers the unique blend of style, driving dynamics and all-road capability that can only be offered by a BMW Sports Activity Coupe. Watch for it in authorized BMW centers beginning in spring 2014.