The runner-up finish keeps Auberlen and co-driver Andy Priaulx at the top of the driver points standings and BMW Team RLL in the lead in team points. The duo completed 84 laps during the two-hour race, finishing 4.710 seconds behind the winning Corvette. 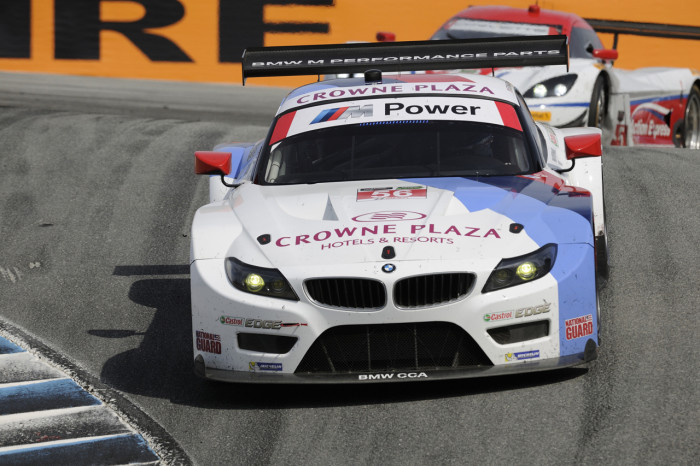 Priaulx, starting from fifth place, drove the opening 50 minutes of the race before handing off to Auberlen from third on lap 36. As competitors pitted the veteran cycled to the lead. Pitting for fuel and a fresh set of Michelin tires on lap 63 he resumed his charge back to the front from fifth. Setting the fastest lap of the race (1:23.195 minutes) on the 71st lap of the race, he passed the No. 62 Ferrari for third place on lap 79. He had a spirited battle with the No. 911 Porsche for the remaining five laps, ultimately passing for second.

The race of teammates John Edwards and Dirk Müller, in the No. 56 BMW Z4 GTLM, was affected by a vibration that forced starting driver Edwards to pit on lap 22 and later in closing stages of the race when Müller was penalized for avoidable contact and called to the pit lane for a stop-and-go penalty. They finished 10th. 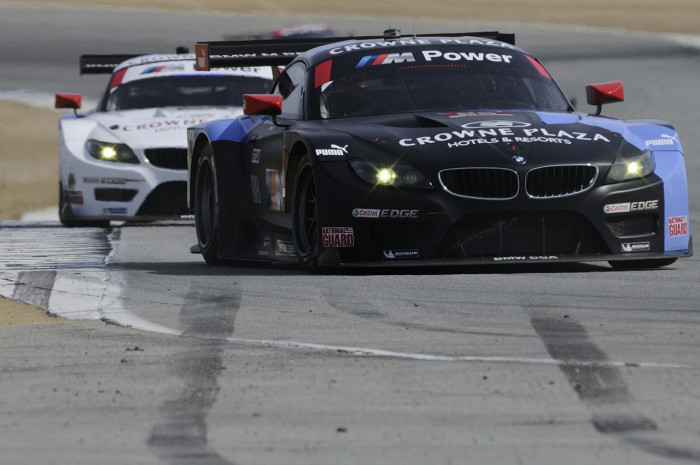 “Bill did a great job in the No. 55 car at the end, but the Porsche ran him off the road twice,” said Bobby Rahal, Team Principal. “It is good to be on the podium again and good for Bill and Andy for their championship. This is our third second place here, and we need to do something about that. It was a hard race today. We took a different pit strategy to the other cars. It worked, but it is a shame the number 56 car got penalized.”

Bill Auberlen, driver No. 55 Z4 GTLM – “Anyone who knows me and has raced against me all these years will tell you I race clean, but when I try to pass another car on the outside of 11 and they slam the door and then do it again on the next lap I am really unhappy. Andy did a great job and he was staying with everybody. You can’t ask anything else of a team mate as he handed me a perfect car. It is great to finish second and extend our lead in the championship.”

Andy Priaulx, driver No. 55 Z4 GTLM – “I am really happy. I had a good stint. I had good tire degradation, saved fuel and handed the car over to Bill in a really good position. I have never been here before and I think I had a very strong weekend. It is great to be coming out of here still leading the championship. That was my goal and I achieved that today. I was watching what happened to Bill and he was driven wide twice. At the end of the day I go home really happy. We worked really hard on the car yesterday after qualifying. Although it was my first time here I wasn’t quite where I wanted to be. But for the race I had a perfect set up and was able to have a really strong race.”

John Edwards, driver No. 56 Z4 GTLM – “It was a frustrating race as our Z4 was really quick. I had a little moment when a prototype passed me on the inside where I thought I could stay ahead one more corner and let him by on the straight. But he came off the brake and was beside me so I had to brake harder to tuck in and locked the up tires. So that gave us a big flat spot and forced us to look at an alternative strategy to the one discussed before the race. We decided to take a chance since I was losing time because of the flat spot. Some rough racing put us out of the race and, unfortunately, we came away with good points here.”

Dirk Müller, driver No. 56 Z4 GTLM – “It is a real shame because we had a really good day going. I had a great car and we were quick. John did a good job, but everybody was playing tactics and basically it was a big train in the beginning. We changed our strategy and I think it paid off because I was mega quick. Then there was that incident with Ollie (Gavin) at the end. I got the penalty. Obviously, I have a different view on that. It was not my intention to have contact with him and I am sorry for that. Nevertheless the race was ruined and our podium went away.”

Today’s race was the final one in a very successful weekend for BMW worldwide.

On Saturday John Edwards and Trent Hindman drove the No. 46 Fall-Line Motorsports BMW M3 to the overall victory in the 2.5-hour Continental Tire Sports Car Challenge race at Laguna Seca. On Sunday morning West Coast fans woke up to the news of BMW’s win at Hockenheim in the opening round of the 2014 DTM series. Marco Wittmann drove to the marque’s 60th DTM victory in the debut for the all-new BMW M4 DTM. Back at Laguna Seca, Sunday afternoon saw another BMW first as Dane Cameron and Markus Palttala drove the No. 94 Turner Motorsport Z4 GTD to its first victory in North America – in only the car’s third IMSA race.

Round Five of the 2014 TUDOR United SportsCar Championship, the Sahlen’s Six hours of The Glen, will take place at Watkins Glen International, in Watkins Glen, NY, on Sunday, June 29th. The race will be broadcast live on Fox Sports 1 beginning at 11:00 a.m. ET. Follow BMW Team RLL on Twitter at @BMWUSARacing for “from-the-pit-box” updates all weekend. More information on the program can be found at www.bmwusa.com and www.imsa.com.

Worldwide BMW Sales Down 2% for February