Marco Wittmann (DE) celebrated his second win of the year at the third race of the DTM season in Budapest (HU). The BMW Team RMG driver took full advantage of his pole position in the Ice-Watch BMW M4 DTM to comfortably lead the race from start to finish. After 41 laps of the Hungaroring, Wittmann came home 6.615 seconds ahead of Miguel Molina (ES, Audi). The 24-year-old has regained the lead in the Drivers’ Championship with 50 points ahead of his home race at the Norisring (DE) at the end of June. The victory was BMW Motorsport’s 61st in the history of the DTM, and the second with the new BMW M4 DTM. This was also the second win in the DTM for BMW Team RMG and its boss Stefan Reinhold (DE).

Bruno Spengler (CA) produced a successful fightback in the BMW Bank M4 DTM to cross the finish line in third place and claim his first podium of the season. Spengler had started the race from ninth on the grid and on standard tyres, and could initially do nothing to stop all the cars on the faster option tyres from passing him. However, when the 2012 DTM champion had changed onto the softer compound, he promptly set about charging through the field on his way to third place and a richly-deserved spot on the podium. 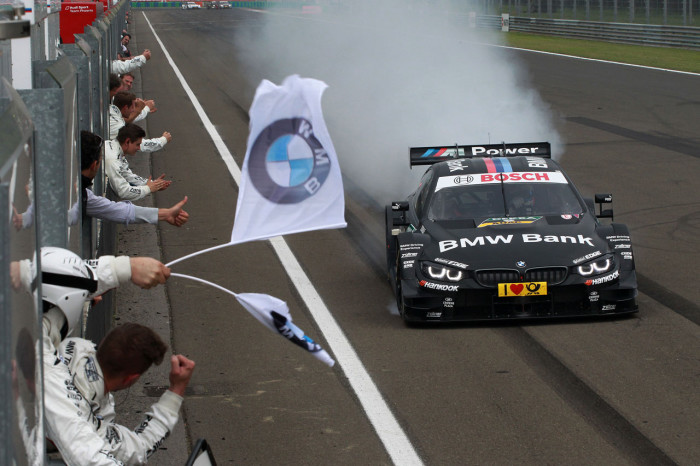 The two DTM rookies in the squad of BMW Motorsport drivers scored their first points of the season: like Spengler, Maxime Martin (BE) fought back impressively to finish sixth in the SAMSUNG BMW M4 DTM. António Félix da Costa (PT) came home eighth in the Red Bull BMW M4 DTM. Timo Glock (DE), his team-mate at BMW Team MTEK, suffered a disappointing end after what had been an impressive display at the Hungaroring. Starting from second on the grid, the DEUTSCHE POST BMW M4 DTM was on course for a podium finish for long periods of the race. However, a combination of the harder compound and some overly-aggressive driving from his opponents resulted in Glock losing ground over the final laps. A puncture suffered as a result of a collision meant he eventually had to settle for 19th.

“That was a very intense race against a great backdrop, in which Marco Wittmann once again put on an absolutely outstanding display. He dominated the race right from the start and stayed clear of trouble at all times. Marco is incredibly strong this season and it is a joy to watch him from the pit wall. His second win of the season in only the third race, and the lead in the Drivers’ Championship – long may this continue. Behind him it was very exciting right to the end, particularly in the battle for third place, due to the different tyre strategies. In the end the strategy employed by Bruno Spengler, who produced some great overtaking manoeuvres at the end of the race, and Maxime Martin paid off. Unfortunately the same cannot be said of António Félix da Costa and Timo Glock. Despite this, congratulations to both our rookies on their first points in the DTM. Four cars in the top ten meant we scored some important points in the Manufacturers’ Championship. It was a great weekend, and we felt right at home here in Hungary.”