BMW has quietly taken the wraps off of the first important update to the 2 Series Active Tourer. The the xDrive option is an iteration on the ALL4 all wheel drive system that first debuted in the Countryman in 2011. The system which weighs in at a svelte 61 KG is only available with the new 8 speed automatic transmission thought to eventually make it’s way to the rest of the BMW and MINI UKL based line-up.

Official Release: Since the premiere of the first four-wheel drive BMW 325i in 1985, BMW has consistently expanded its four-wheel drive competence with new models and constant further development in the field of drive technology. One of the milestones is undoubtedly the intelligent four-wheel drive system BMW xDrive, which was first used in the BMW X3 and the X5 in 2004 and is now available for numerous models and series. Even at that time, engineers did not focus solely on improving traction and vehicle stability. In addition to a high degree of functionality and enhanced cornering dynamics, the minimisation of system-related losses and constant weight reduction are top priorities set to keep the fuel consumption and emission levels of four-wheel drive vehicles as low as possible. To this end, the intelligent four-wheel drive system BMW xDrive is always aligned to each vehicle concept (Sedan/Coupe, SAV, SAC) with the aim of implementing the optimum solution. 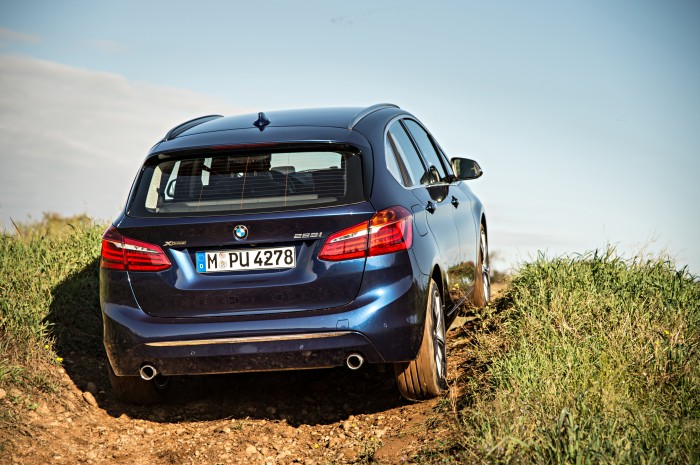 The latest example of model-specific alignment of the four-wheel drive system is provided by the BMW 2 Series Active Tourer. The fundamental difference to previous variants is that, for the first time, BMW xDrive is premised on a front-wheel drive concept with transversally installed engines. The Active Tourer has already proven that front-wheel drive technology fully meets the brand’s demands in terms of driving dynamics. This is largely owed to the new range of modularly constructed three- and four-cylinder engines which, thanks to state-of-the-art TwinPower Turbo technology, excel to an equal extent through high performance characteristics and outstanding efficiency. With the BMW 225i xDrive Active Tourer (fuel consumption combined: 6,5–6,4 l/100 km; CO2 emissions combined: 152-148 g/km)* and the BMW 220d xDrive Active Tourer (fuel consumption combined: 4,8-4,6 l/100km; CO2 emissions combined: 127-122 g/km)*, the intelligent four-wheel drive system is now available for top-of-the-range power units to further improve traction, vehicle stability and cornering dynamics, with the aim of enhancing safety and driving pleasure. Both models feature BMW xDrive as standard in combination with the 8-speed Steptronic transmission. 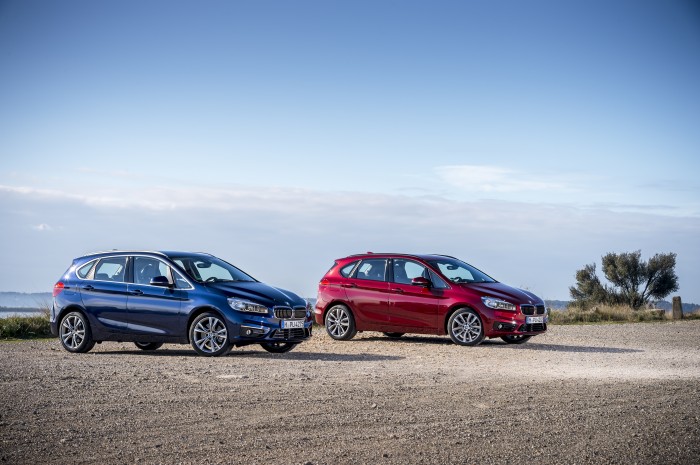 The slender architecture featuring compact, lightweight components and the resulting low amount of space required by the new four-wheel drive system are excellently suited to the concept of the BMW 2 Series Active Tourer. Thus the additional weight of the entire four-wheel drive technology is only around 61 kg. Furthermore, measures for reducing system-related losses and an energy-efficient operating strategy ensure extremely favourable fuel consumption and emission levels.

Power from the front drive to the rear axle is transferred by means of an angular gear (Power Take-Off) on the front differential and a two-part cardan shaft. The central component of the four-wheel drive system is an electro-hydraulically controlled multiple-disk clutch (Hang-On) inside the rear axle drive, which facilitates infinitely variable distribution of torque to the front and rear wheels. The corresponding commands are provided by an electronic control unit which, like the hydraulic pump, is located on the rear axle. 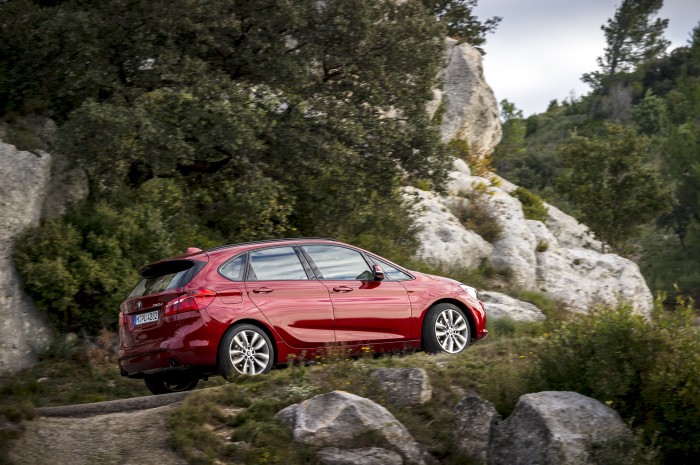 The angular gear is mounted behind the engine on the automatic transmission and crankcase. The input shaft is a hollow shaft construction and directly connected to the front axle differential. In this way, part of the drive force is transferred from the differential basket to the cardan shaft via the hollow shaft, the crown wheel and the pinion shaft. The angular gear operates at a fixed gear ratio (1:1.74) and is permanently engaged, meaning that the cardan shaft always rotates when the vehicle is driven. Reversal of transmission takes place in the rear axle drive so that the front and rear axle drive shafts both rotate at exactly the same speed. 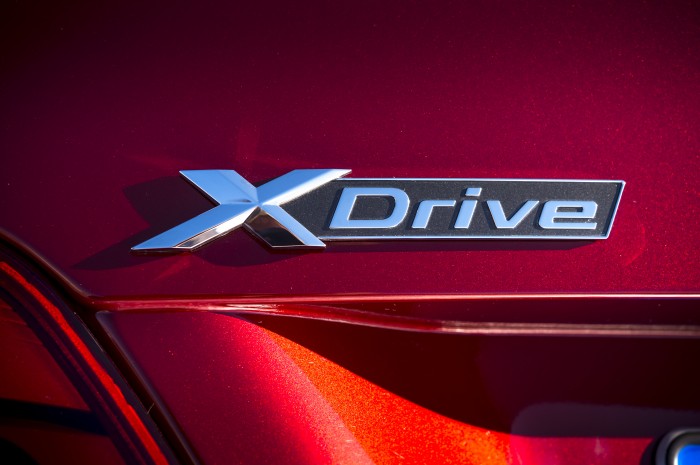 The multiple-disk clutch located in the rear axle drive (Hang-On) directs a proportion of torque to the rear wheels according to each driving situation, thus ensuring variable power distribution between the front and rear axle as required. In extreme cases (e.g. the front wheels are standing on ice), the ratio can be 0:100. The required operating pressure (0 to 40 bar) is delivered by an electro-hydraulic pump, the speed of which is defined by a pulse-width-modulated signal from the electronic control unit. Pressure is not measured by a sensor, but extremely accurately by means of voltage and power alignment. In order to ensure maximum positioning accuracy, run-in behaviour and temperature influences are independently compensated, the system constantly adapting to ever changing operating conditions. 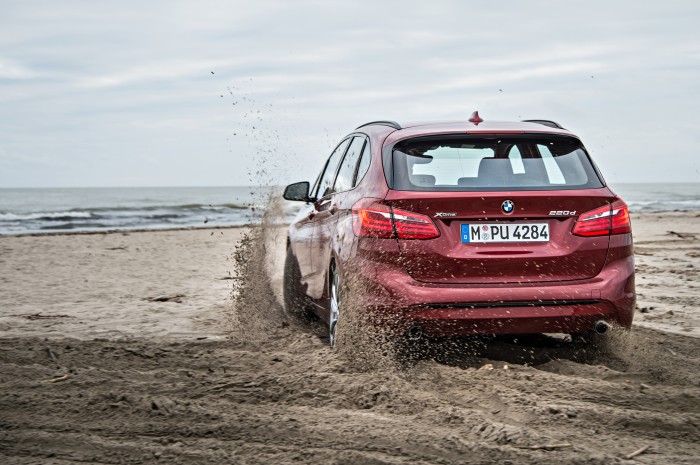 Moreover, xDrive utilises an energy-efficient operating strategy: When four-wheel drive is not required – which is usually the case in day-to-day operation – the pump is deactivated, rendering the system unpressurised. The BMW 2 Series Active Tourer is then driven only via the front wheels. In order to make use of additional saving potentials, BMW has provided the multiple-disk clutch with a spring-loaded Efficient valve, which lowers the oil level in the clutch and significantly reduces friction losses (oil splash losses). When required, the system takes only fractions of a second to build up maximum operating pressure in the Efficient mode and thus deliver maximum torque to the rear wheels. This intervention goes unnoticed by the driver and passengers and without any losses in traction. 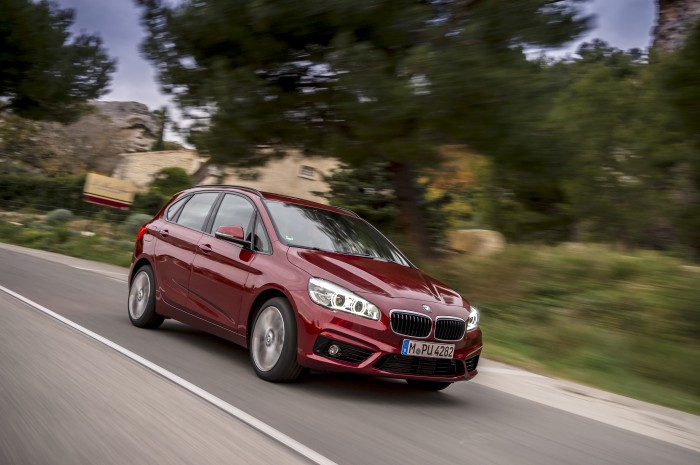 In order to guarantee efficient and constant power distribution to the front and rear axle as required, the four-wheel drive system is managed from the control unit of the Dynamic Stability Control feature (DSC). In order to analyse each driving situation, DSC analyses a large amount of data providing information on each respective running condition and ensuring optimum distribution of drive torque. This information includes vehicle speed, lateral and longitudinal acceleration, steering angle, wheel speed, longitudinal inclination, accelerator position and the setup via Driving Experience Control. Furthermore, the DSC status, including Dynamic Traction Control (DTC), Electronic Differential Lock Control (EDLC) and Performance Control is taken into account. Adjustment of the four-wheel drive system to the ever changing driving and road conditions is performed – in typical BMW xDrive manner – within fractions of a second, thus guaranteeing consistently neutral and safe handling even in difficult conditions. Nevertheless, the variable distribution of power between the two axles goes virtually unnoticed by the driver. Also, within the framework of the efficient operating strategy, torque distribution is precisely regulated as to avoid any loss of power due to wheel spin. 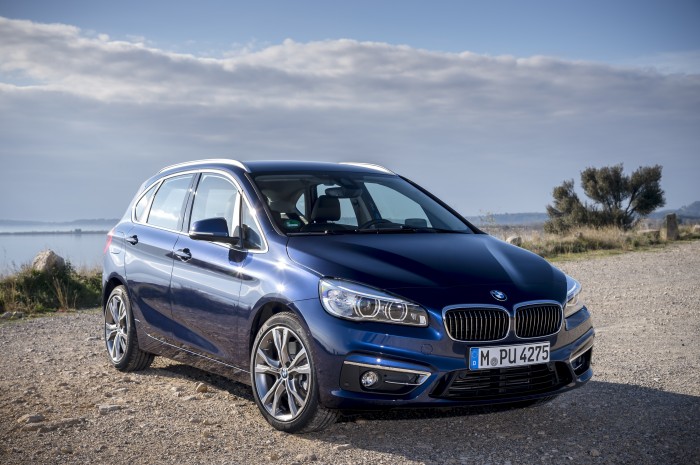 Thanks to DSC networking, any imminent wheel slip for example can be detected at an early stage. Through precise distribution of drive torque this situation can be anticipated and avoided. If for instance the vehicle threatens to drift outwards over the front wheels, increased tractive force is supplied to the rear axle, allowing the vehicle to turn in more accurately. On the other hand, xDrive directs excess force to the front wheels, should the rear of the vehicle threaten to swerve outwards. As a result, maximum four-wheel performance is available even before slippage occurs. Therefore, xDrive featured in the BMW 2 Series Active Tourer not only ensures best possible traction and safety in adverse road conditions, but also enhances vehicle stability, cornering dynamics and ride comfort. In driving situations where the interconnection of all four wheels is disadvantageous – i.e. in an emergency stop – the system opens the multiple-disk clutch completely within milliseconds.

Only if optimum power distribution to the front and rear axle is not sufficient to keep the Active Tourer on the desired course, DSC intervenes by reducing engine output and/or by decelerating individual wheels. Moreover, DSC assumes the function of a transverse differential lock: If a wheel spins without transferring power, it is automatically slowed down, whereby the axle differential directs more power to the wheel opposite.

* Fuel consumption figures were calculated on the basis of the ECE test cycle, depending on tyre format.