The best looking BMW race car in a long time. That’s our first thought looking at this new Z4. Make sure to catch it in action next weekend at the 12 Hours of Sebring. 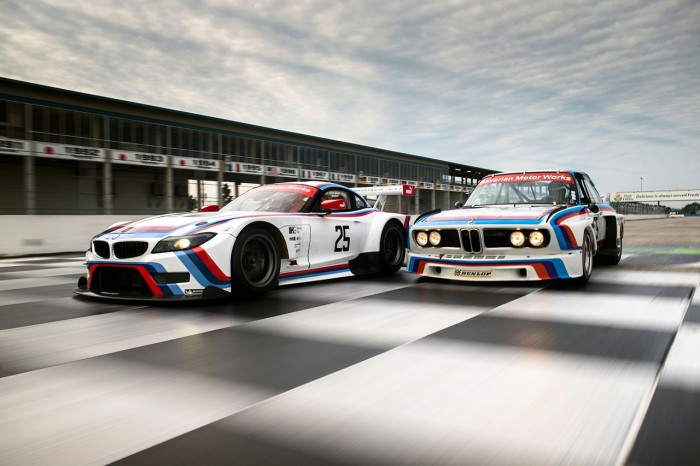 Official Release: On 21st March, BMW Team RLL will contest the 63rd staging of the legendary 12-hour race of Sebring (US) in the US state of Florida. The endurance classic is also the second race of the 2015 United SportsCar Championship (USCC). BMW Motorsport and BMW of North America celebrate a special anniversary on their return to Sebring this season: 40 years ago, BMW Motorsport got its first Sebring victory, with the BMW 3.0 CSL.

In honor of that success, the two BMW Z4 GTLMs of BMW Team RLL will sport special designs as they compete on the “Sebring International Raceway.” Car number 25 will carry the colors of the winning BMW 3.0 CSL of 1975. At an unveiling ceremony, which was part of the “Amelia Island Concours d’Elegance” in northern Florida, BMW of North America presented the anniversary design of the vehicles to the public for the first time.

Many of the successful heroes of that time took the opportunity to attend the presentation. Forty years after the historic victory, then winners Brian Redman (US), Sam Posey (US) and Hans-Joachim Stuck (DE) were reunited on Amelia Island. Jochen Neerpasch, the first managing director of BMW Motorsport GmbH, and BMW Motorsport Director Jens Marquardt were also among the guests. They all had front row seats as current BMW Team RLL driver Bill Auberlen (US) completed the first presentation laps in the BMW Z4 GTLM with the anniversary design.

1975 was a significant year in the history of BMW in North America: BMW of North America was founded, and just a few days later came the historic first victory with the BMW 3.0 CSL in Sebring. After finishing second and fourth in the GTLM class at the season opener in Daytona (US), BMW Team RLL is hoping to add another chapter to the BMW success story at this year’s classic.

BMW Invests € 400 million at the Leipzig Plant for Megacity Prodcution

Worldwide BMW Sales up 7.5% For January