April numbers were a mixed bag for BMW NA. While US light vehicle sales declined 4.7% when compared to April of last year, BMW deliveries dropped 9.3%. While this doesn’t look good, it falls squarely between the 8.5% drop at Mercedes-Benz and the 11.1% drop at Lexus. Last month BMW slightly edged MB in sales volume, but sadly, the trend didn’t continue.

While sedans continue to take the most of the bad news, down 11%, this month also marks the first time light truck sales have declined since September 2013. Even though the decline was only a very slight 0.1%, the SUV/CUV/Pick-Up juggernaut appears to have finally run out of steam. In the face of increasing inventories and increasing incentives to lure buyers, even the most bullish of forecasters are admitting that US light vehicle sales have plateaued and that the start of what may be a long, tough decline may be at hand. The die-hards point out increasing consumer confidence, but looking deeper at the numbers shows that consumption spending isn’t reflecting the same optimism. (Usually these two numbers move roughly in the same direction at the same rate. Why this is the case is causing many economists sleepless nights!) 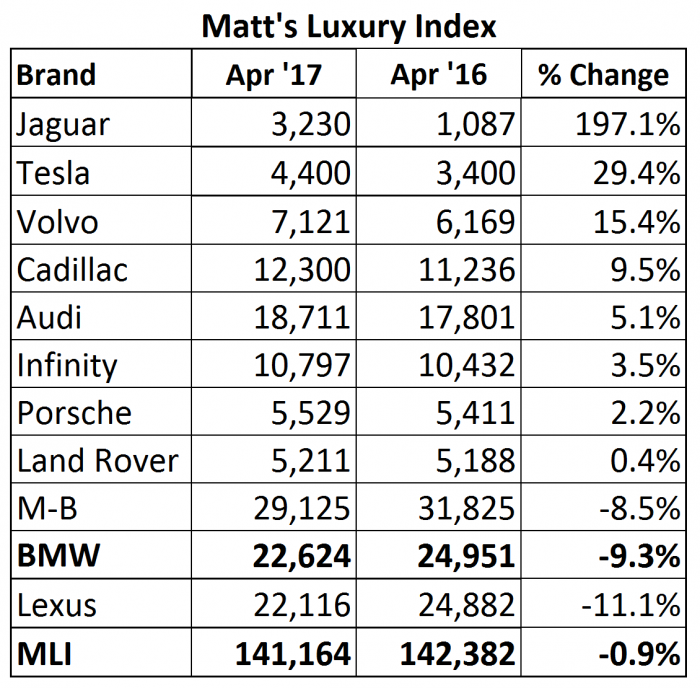 Matt’s Luxury Index doesn’t contain a much good news either. Jaguar leads the pack on the exceptional versions of the F-Type and the F-Pace, and Volvo product continues to move  well. Audi achieved yet another month of sales growth. One interesting item is that 2016 model sales accounted for 8% of sales, up from 3% just five years ago. Inventory is sticking around longer, and that’s not good. It’s hard to command top dollar for the latest and greatest when last years product is still on dealer lots, often selling at a significant discount. The good news is that all of the big-three of luxury sales in the US, MB, BMW and Lexus, all had bad months. We’d call that glass half-empty, for sure! 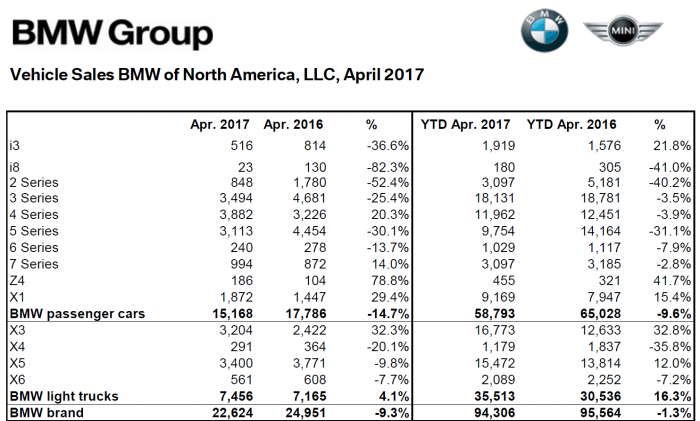 BMW sedans, other than the 4-series and the 7-series, all took a bit of a beating. While the 5-series has been very well received, the model line-up isn’t complete and supplies are limited. Sales numbers are down compared to last year. Really, the X1 and the X3 carried the X-series flag this last month.

“For BMW, tight supply of key models had a strong effect in April” said Bernhard Kuhnt, President and CEO, BMW of North America. “Our very popular new 5 Series is still ramping up production as the latest variants are making their way to our dealerships. Our Sports Activity Vehicles are still in high demand with the X1 and X3 turning in good results.”

BMW to Race an All-New BMW M4 GT3 Next Year

BMW Welcomes the Future of Mobility Live from the Welt