They say the roadster is dead. They say that BMW has turned into a luxury crossover company. Today BMW is trying to prove that wrong with the gorgeous BMW Z4 Concept. The concept car gives us another take on a refined BMW design language that first debuted in the 8 Series concept earlier this year. Sharper and more dynamic, the new look is more sculpted than we’ve seen from BMW thanks to the traditional Zicker line being removed from the belt-line of the car. Like the 8 Series concept, this allows the Z4 concept to feel more fluid and athletic. 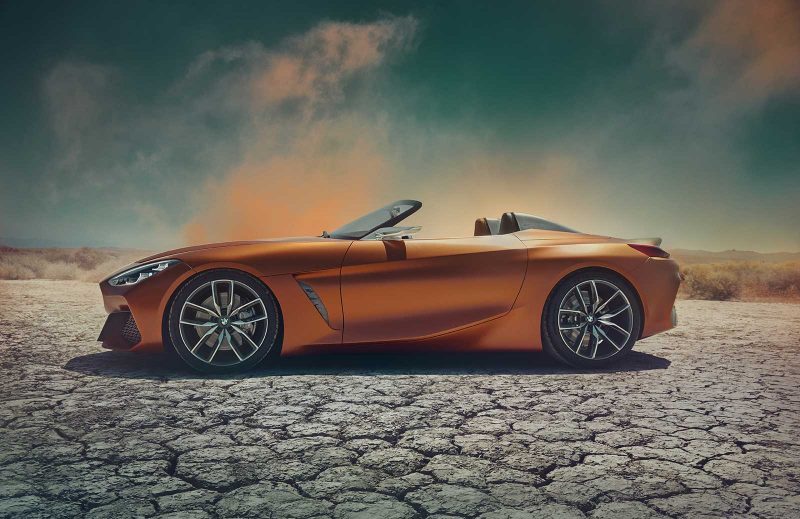 All great but what are you really looking at here?

This is the new Z4. Take away the paint, some grille details, the polish from the wheels, carbon fiber and some of the rear light detailing and the exterior is spot on. Inside the leather and dash finishes are for show but everything else is pretty much production spec. Good news as to our eyes this is an incredible looking car that should put some excitement into BMW showrooms. 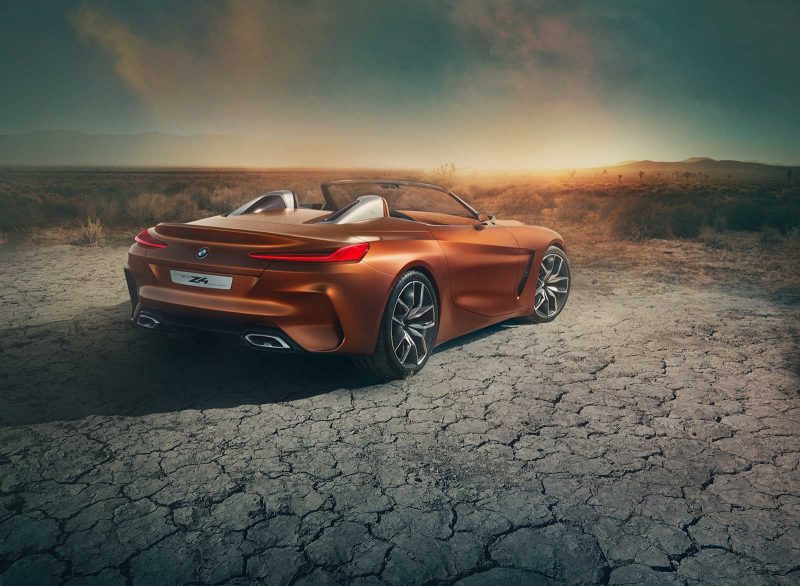 How much of this is a Toyota?

All or none depending on how you look at it. But lets back up. In order for BMW to commit to building another low-profit roadster BMW had to find a partner to help defray development costs. Enter Toyota who was fresh off of the Subaru collaboration and had just entered into a strategic alliance with BMW. What that means or the Z4 is that the drivetrain and all electronics are 100% BMW. The hard points of the engineering (ie the chassis, suspension and some braking components) are shared.

One interesting note. We can’t help but wonder that the vertical alignment of the lights was dictated by the upcoming Toyota Supra. 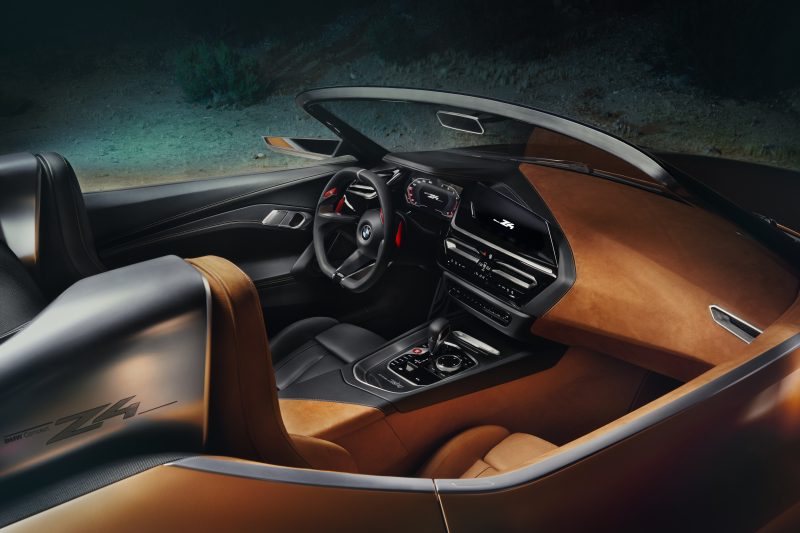 Will there be a coupe?

The rumor is no. According to sources BMW has agreed to cede the small coupe model if Toyota cedes the convertible – meaning the two won’t technically compete with each other. Of course for BMW enthusiasts this is unfortunate as the two times BMW create coupes from the Z line of cars they were spectacular. But we digress.

When will we see this and how much will it cost?

We expect the Z4 to debut in production form in early 2017 and hit showrooms in the spring. Costs are unknown but should be equivalent to the current Z4 range. Engines will start with the revised 2.0 four cylinder and go up to the turbo inline six. Transmission will come in both automatic and manual (whew) varieties. 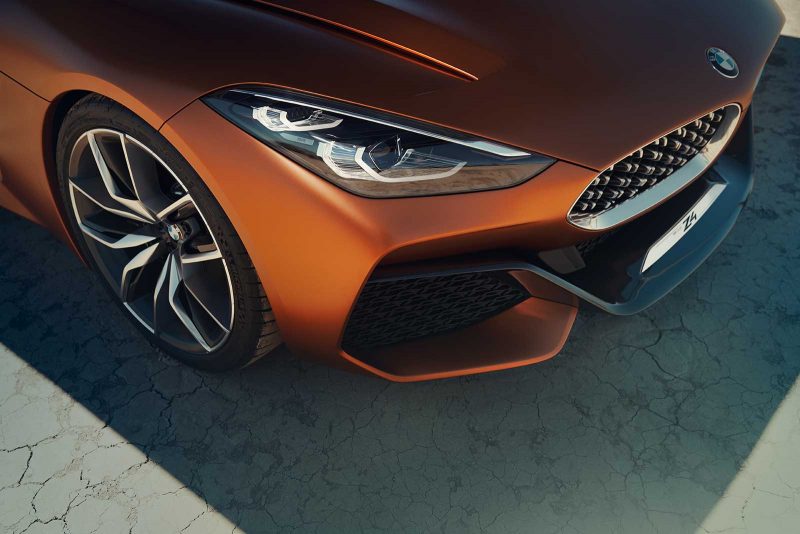 Official Release: The BMW Group is using the Concours d’Elegance at Pebble Beach to present its exciting new take on a BMW roadster. Dynamic, progressive and an irresistible purveyor of thrills, the BMW Concept Z4 boasts lithe and compact proportions, a dynamic silhouette and an emotionally appealing use of forms. The attention-grabbing design study offers a look ahead to the series-production version of the car set to be unveiled over the course of next year. “The BMW Concept Z4 in an all-out driving machine,” said Adrian van Hooydonk, Senior Vice President BMW Group Design. “Stripping the car back to the bare essentials allows the driver to experience all the ingredients of motoring pleasure with supreme directness. This is total freedom on four wheels.” 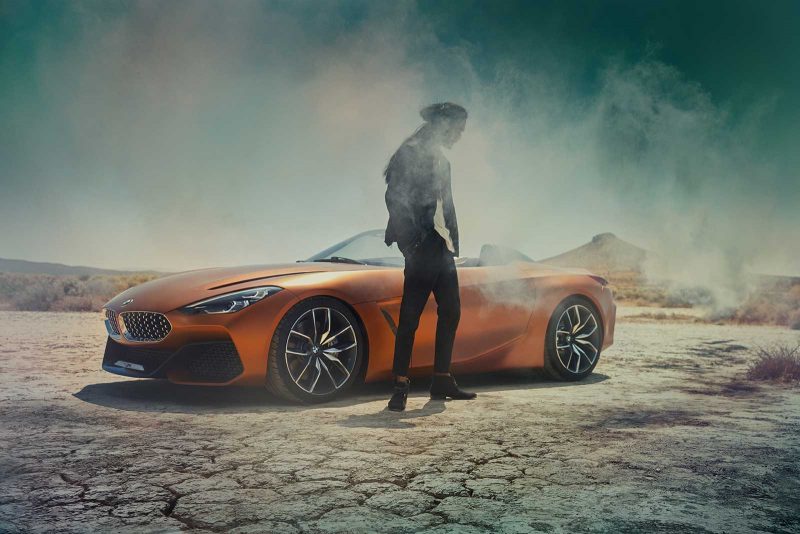 A statement of unbridled driving pleasure.

The sporty and progressive BMW Concept Z4 encapsulates the BMW Group’s vision of a modern roadster. “The BMW Concept Z4 expresses the new BMW design language from all perspectives and in all details. From the dynamic-looking front to the striking flanks to the clean-cut tail end: a few lines and the subtle interplay between surfaces are enough to generate a sense of power and emotion,” adds van Hooydonk.

The BMW Concept Z4 adopts classical roadster design cues, such as a long wheelbase, a low-slung, stretched silhouette and a compact rear end, wraps them in a fresh, confident package and enriches them with the contemporary BMW design language. A shorter bonnet and crisp overhangs ensure the driver sits closer to the centre of the car than in previous BMW roadsters. This gives the new proportions a focused, sporty and agile feel. The outline of the car follows a distinct wedge shape, which fills the BMW Concept Z4 with dynamism before it even pulls away. The large domes stretching out rearwards from the cabin elegantly integrate the function of rollover bars and provide a sporting conclusion to the low-to-the-road silhouette at the rear. 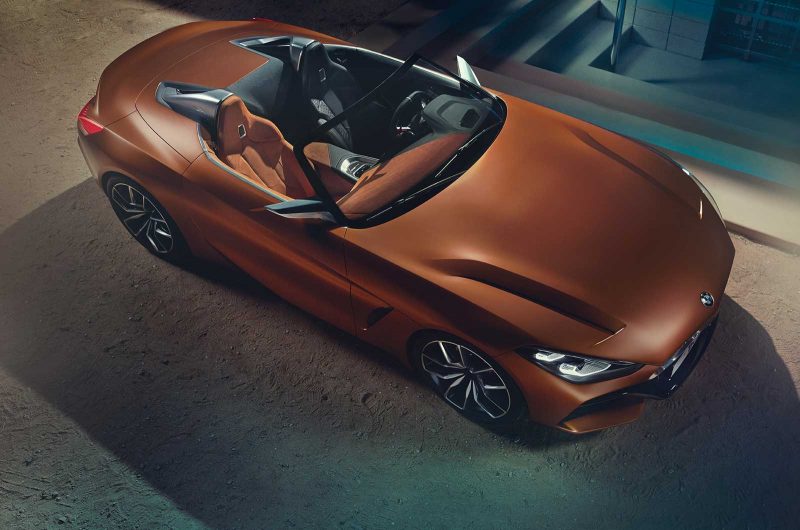 Reimagining the design language and surfaces.

The clearly sculpted shark nose at the front end spawns dramatic surface contouring that extends the full length of the flanks. The new direction taken by BMW’s design language can be seen here in just a few precise lines that form clear surfaces, while the body’s volumes are powerfully sculpted. The surfaces and forms therefore create an extremely modern and emotionally engaging impression. The large Air Breathers rearwards of the front wheels act as the source of the flanks’ elaborately modelled surfaces (they appear to be shaped by the flow of air as it exits the Air Breathers). Light and shaded surfaces develop in a rising movement towards the rear, then twist to form muscular wheel arches and athletic volumes. All of which shines a bright stylistic spotlight on the car’s rear-wheel drive. The dramatic interplay of lines and surfaces underscores the wedge shape of the flanks and infuses them with even greater dynamism. And the low door sills, with their distinctive crease, makes the body appear closer to the road, emphasising the low-slung sensation when viewing the car from the side. The expressive Energetic Orange frozen exterior paint finish showcases the contrasts of light and shade in the surfacing, accentuating the three-dimensionality of the exterior. And the 20-inch light-alloy wheels in a sporty bi-colour double-spoke design provide harmonious finishing touches to the styling of the flanks. 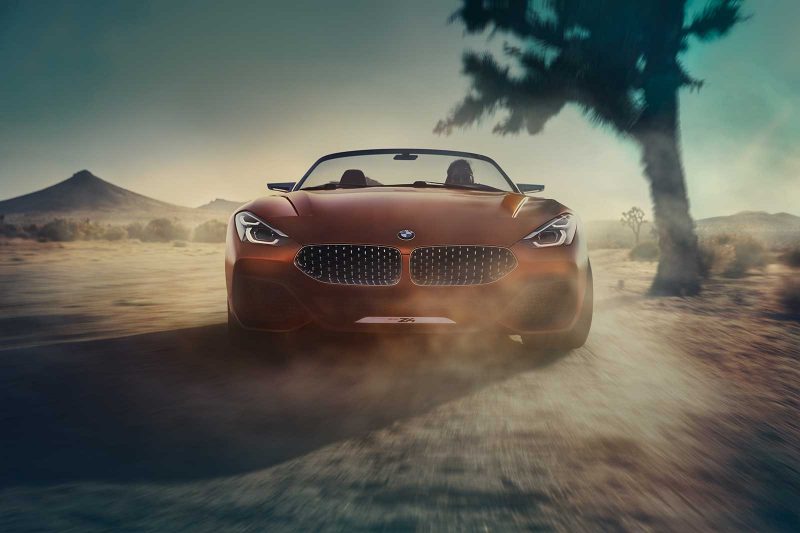 Low and progressive – the front end.

The design of the BMW Concept Z4’s front end is undeniably sporty in nature. The relationship between the low-set, broad kidney grille and the positioning of the headlights higher up sparks deliberate associations with the BMW Z8 and lends the BMW Concept Z4 a certain flamboyance. In place of the customary bars, the inside of the kidney grille features elaborately designed mesh, whose vertical orientation recalls the sporty, functional kidney design of early BMW roadsters such as the BMW 328 Mille Miglia. In a departure from the BMW norm, the Concept Z4 provides a vertical interpretation of the classical four-eyed headlight look, with two overlapping tubes on each side. The turn signal indicators point diagonally towards the kidneys from above and underline the dynamic flair of the front end. And the clamshell bonnet with stylised gill vents curves over the wheels, creating an intriguing and virtually seamless sweep over the front end as a whole.

The front apron cuts a genuinely athletic figure with its sculptural design language. Its trio of large air intakes are a nod to the powerful engine further back and so carry the promise of a dynamic driving experience. The large carbon-fibre insert in the central air intake is straight out of the motor sport playbook and champions the use of detail to emphasise the front end’s dynamic presence. Together, these design elements compose a fresh and memorable face for the Concept Z4 – one which pays a very modern and sporting tribute to the celebrated roadsters of BMW’s past. 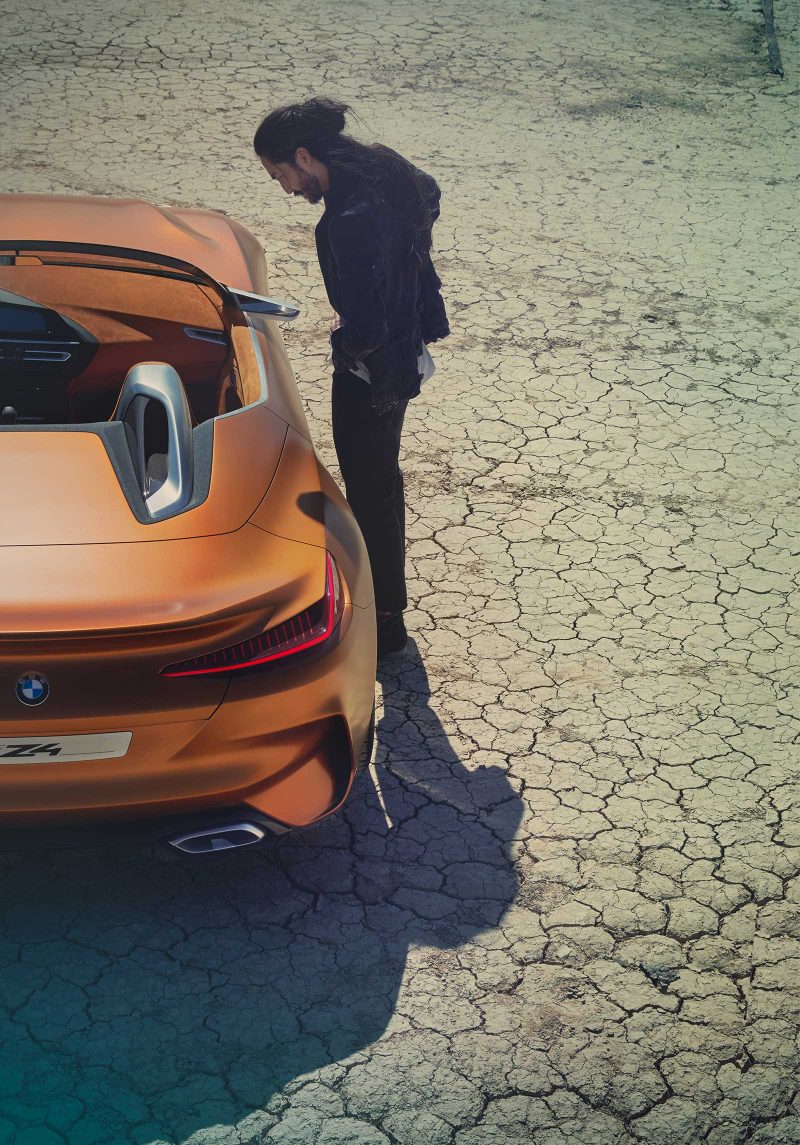 Athletic and eye-catching – the rear end.

The design of the BMW Concept Z4 likewise references details and qualities from BMW’s rich roadster tradition and updates them for the years ahead. The wide and low design of the rear picks up the lines of the car’s flanks and massages them into a modern rear of beguiling clarity in terms of surfaces and styling elements. The powerfully flared wheel arches give the car broad haunches, which are emphasised by the slim, L-shaped rear lights and therefore further enhance the car’s sporting stance. Above the rear lights, the boot lid – complete with prominent spoiler – stretches across to the burly wheel arch extensions, sending out a message of power-infused agility. Below, large air outlets in the rear apron create their own dynamic impression. The carbon-fibre diffuser adds a sporty and exclusive flourish and signs off the rear end at its lowest point to the road. 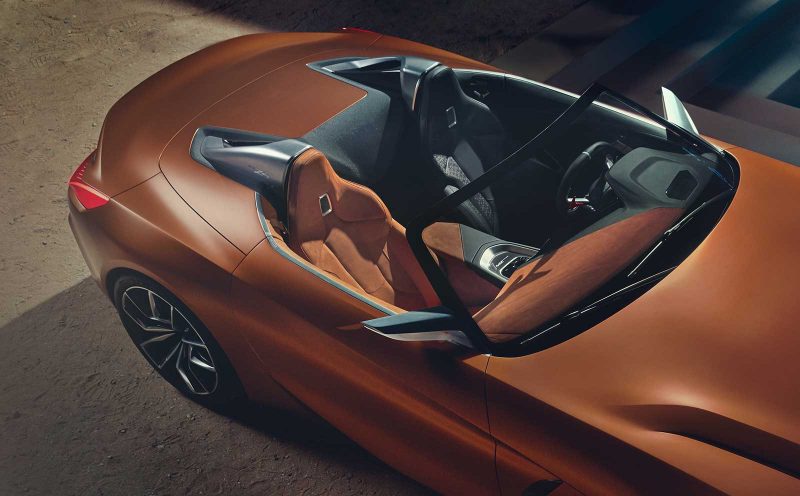 Exterior and interior in unison.

Maximum focus on the driving experience.

At the same time, the interior serves to reinforce the total focus on the driving experience too. The driver’s seat as well as the door trim panels, instrument panel and centre stack that encircle the driver are finished entirely in black, meaning that they stand out prominently from the coordinated orange shades of the exterior and the rest of the interior. Together they form a clearly defined area that wraps around the driver like a capsule, producing a very sporty sensation. This creates a pure-of-purpose driving environment with a pronounced “cone of vision”, where the steering wheel as well as the surrounding black surfaces appear to be surging forward and, in so doing, accentuate the cabin’s powerful driver focus.

The instrument cluster and central information display form a high-quality cluster of screens that are integrated into the driver’s cockpit to flawless ergonomic effect. The two displays are now positioned at almost the same height and in close proximity to one another, which gives the impression of a single, cohesive unit. They work together to deliver the right information at the right time. The driver can choose which elements they wish to call up (via touch command) from the content available in the information display – route guidance, playlists or other infotainment features. Above the instrument cluster, the Head-Up Display presents the key driving information within the driver’s direct field of view. 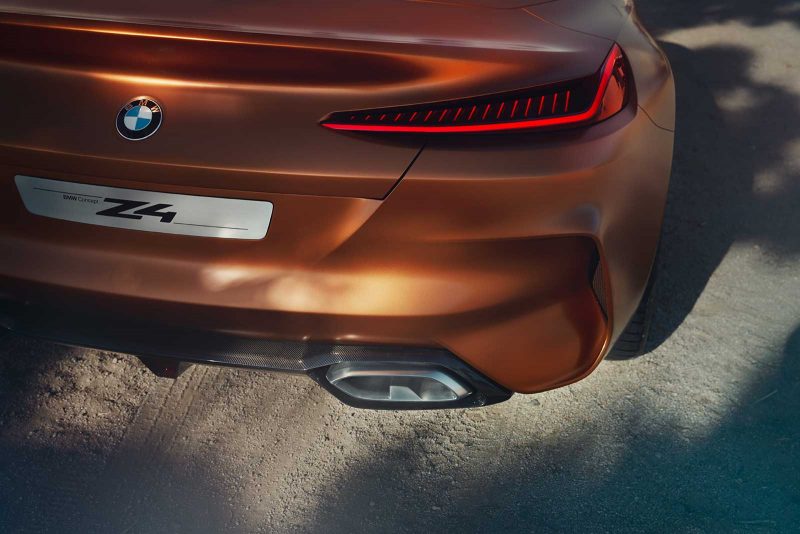 Emerging from the driver’s side of the cabin is a sporty instrument panel of inherent lightness. The clever arrangement of surfaces and edging breaks up the considerable volumes and engenders the impression of a powerfully chiselled muscle. The clear wraparound design from the doors to the instrument panel enhances the sporty, cocooned feeling in both seats. 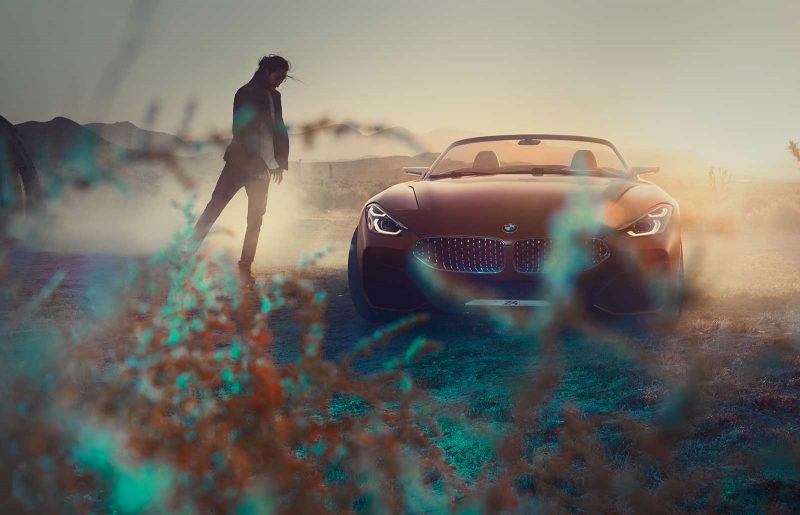 Pared back to the essentials.

In keeping with the focus on the essentials, all the controls are grouped into “function islands”. Nothing distracts from the driving experience. Trim elements inside the cabin are likewise minimalist in nature. Indeed, it is instead the classy materials, carefully applied polished chrome accents and swish, hexagonal laser-cut motifs in the seats that do most to create the interior’s exclusive ambience. Carbon-fibre door sill finishers and embossed asymmetrical logos in the seats and instrument panel set the seal on the interior’s sporting profile.

BMW Steps Up To The Podium Again in DTM