BMW’s expanded diesel strategy has been a boon to diesel fans. It’s comprised of two engines: the four cylinder 28d power plant with 45 MPG on the highway, and the 35d which trades some efficiency for performance. This new power plant makes due with a single turbo that leverages BMW’s twin scroll or “TwinPower” technology. It’s output of 255 hp is down 10 hp from the previous 35d and has also lost 12 lb-ft of torque at 413. However, BMW North America have made the conscious, and we think, wise decision to not bring this highest performance diesel to the US market at this time. While BMW still makes a twin-turbo diesel, and even a tri-turbo in the form of the M X550d, they have decided to cater a bit more towards MPG figures than performance. The 535d gets an impressive 38 MPG on the highway. It’s not apples to apples but the previous 35d power plant could only get 26 MPG in the heavier X5.

So more efficiency and pretty much the same performance, but the true test of a diesel is simply disappearing into the experience of driving. You don’t want to be assaulted by engine clatter or annoyed at low redlines. Thankfully this new generation diesel, mated with the isolated chassis of the F10 5 Series, cocoons the driver in the sport-oriented luxury we’d expect from BMW. While the 535d is missing the sonorous growl of the N55, the note isn’t bad and noticeably sportier-sounding than the previous engine.

This new engine feels more eager to rev and feels every bit as powerful as the previous engine going by the seat of our pants. Regarding that last point, some credit has to go to the ZF 8 Speed transmission, which has a tendency to make any car (or engine for that matter) immediately more lively. 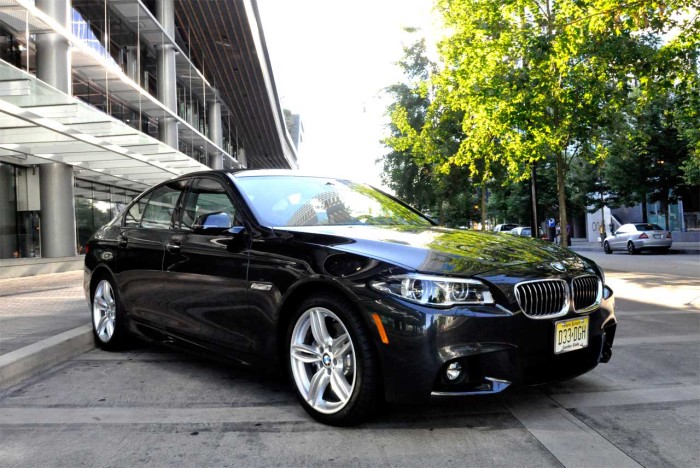 Elsewhere, the refreshed 2014 5-Series has been nipped and tucked in all the smart ways you’d expect. Subtly revised exterior design — basically just the lights and bumpers — is well done. The optional LED lights with the squared off “angel eyes” look as though they should have been there from the start. The effect is one of less vertical mass upfront – something the F10 needed some help with.

One major criticism we’ve had of the F10 since its introduction was the rather vague electrically assisted steering. For 2014, that steering has been re-calibrated for improved feel and better steering weight. The results aren’t breathtaking but there is a noticeable sharpness that wasn’t there before.

The steering improvements combined with the retuned dampers go a long way in helping to re-establish the 5 Series as the sport sedan benchmark it had been for years. There’s not only more steering feel but less body roll and what felt like a better ride over the broken pavement of Washington state’s best coastal roads.

The 535d starts out at $56,600 — compared to $55,100 for the gasoline equivalent (535i). With 8 MPG separating the two on the highway, there is a major benefit to be had in efficiency. For those who want similar performance to a gasoline powered engine (the 535d is only .3 slower than the 535i in terms of 0-60 time), better MPG and range, the 535d makes a huge amount of sense. It also makes a lot of sense for those who want to own a diesel while not being reminded of their choice every time they step on the throttle. This is a beautifully refined $60,000 sports sedan that blends performance, luxury and efficiency better than almost anything else in BMW’s range. The fact that it’s a diesel was quickly forgotten as I went from apex to apex with the Pacific on my right.

Perhaps the only thing more impressive than the engine was the updates to the 5 Series range itself. With such a subtle visual change we didn’t know what to expect in regards to the driving improvements of the car. However, call us impressed. Improved steering feel and some suspension tweaks make the F10 a more confident car in the corners and in general, more satisfying. 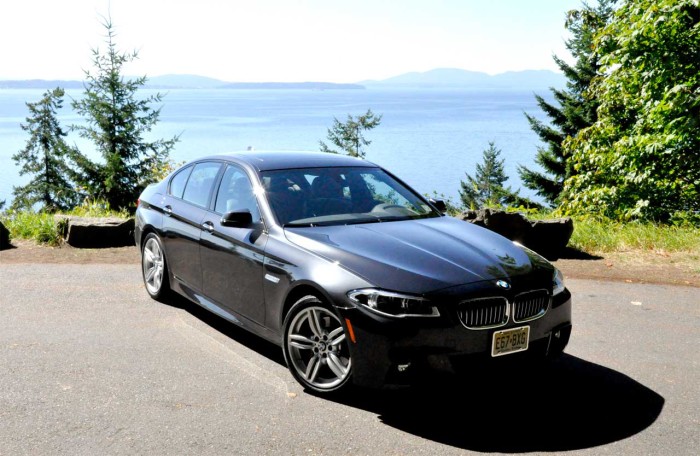