The satin sheet dropped and there it was. All of it. The G02 7 Series looked imposing in the best sense with a squared muscular stance and chrome gleaming in the morning sunlight. We’ve seen plenty of leaked photos and finally official ones. But none of them compared with the dimensionality of seeing the new G02 in person. 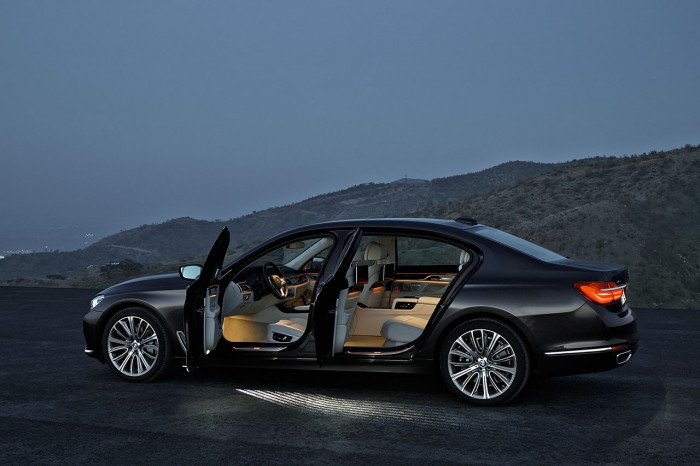 As part of BMWNA’s 7 Series launch, BF (along with other media outlets) were invited to spend some hands-on time with a couple of pre-production 750is. Here’s what we learned.

The new G02 is going after a market that has historically been dominated by the S Class. And this time BMW is focusing luxury, innovation, technology and performance. 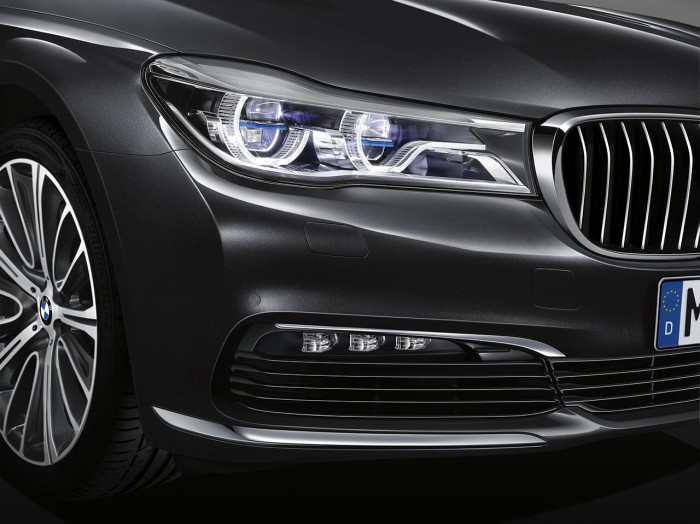 In the new G02 BMW has packed 25 all-new innovations, 13 of which aren’t offered by anyone else. But the G02 7 Series promises much more than simply technology. With the new range topper BMW has set out to redefine luxury for both itself and the industry. While money can buy you more, BMW’s focus was to bring a new level of luxury to the mass produced automobile. And in the 30+ years since the 7 Series debuted, the idea of automotive luxury has moved on from plush carpets and smooth shifting automatics. In the 2016 7 Series it means:

– Massaging front and rear seats that offer various ways to relax or actively participate in “working out” parts of your upper back.
– Carpet of light projected onto the ground as you walk up, open and close each door
– Ambient air package that subtly wafts fragrance throughout the cabin
– Optional Sky Lounge roof with thousands of small laser engravings that reflect light like stars via the side mounted LEDs.
– BO Diamond Surround System featuring the Brand’s highest level of audiophile performance ever offered in an automobile complete with 1400 watts and speakers that illuminate
– A tablet controlled rear entertainment system that also accepts video streams à la Apple TV or Chrome Cast that can be projected on each of the 10.2” screen situated in the back of the front head-rests
– LED highbeams with a laser module allowing for far greater visibility (not yet available in the US) 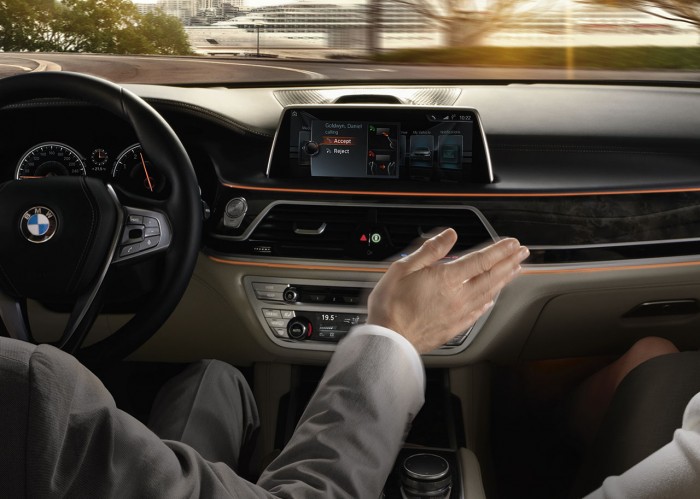 At the center of the 2016 7 Series interior is the heavily revised iDrive now with touch and gesture control. BMW has defined five gestures for controlling audio levels and incoming calls among other things. In addition to that there are two configurable gestures that can control a number of other functions should the owners want to further customize the experience. There’s a learning curve to this, but doing it once or twice is about all you need to master the gestures. That said there is a slight lag to the system reacting to gestures that isn’t there when using the touch screen or iDrive. That lag very well could render the gesture based input secondary for power users.

Gestures are interesting but it’s another input model that had us curious. BMW has for years told us about the dangers of touch screens in cars. Yet here I am using my fingers to tap, slide, pinch and zoom my way through iDrive. The truth is it works beautifully as if the system had been designed from the outset to accommodate fingers. While the official line from the company is that the iDrive wheel is still the safer input method, there’s no doubt that the touch screen is a compelling and quick way to get where you need within the system. How quick? While it’s not quite at the level of an Apple iOS device in terms of user reaction, it’s quick enough for you to forgive any subtle lag. In fact the system has quicker reflexes than even Tesla’s massive touch screen system in the Model S we tested earlier this year.

Elsewhere inside BMW has given us wireless charging based around the protocol used by the new Samsung S6. While iPhone users (the majority of 7 Series owners we hear) will find that useless, BMW will provide a pouch for you to plug your iPhone into that accepts wireless charging.

Since we’re on the topic of digital lag, we should probably touch on that massive touch-screen key fob that BMW will offer as optional on the 7 Series. It’s the same one as found in the i8 that offers owners the opportunity to see data on the car (range for example) as well as tweak settings remotely. Sounds fantastic. But there’s a problem. It’s slow. The lag between input and action on the small screen is painful at times. And the interface, while elegant looking, lacks the polish that Apple and Google have had years to perfect. What’s a button? What’s interactive? What can I control? Those were all questions I had within 10 seconds of picking it up and starting to use it. Thankfully the core functionality of locking and unlocking doors and the trunk are independent of the screen based nav. But for us it’s an option that squarely falls into the nice to have category at best. At worst it’s a really big key fob that you have to constantly make sure is charged in the conductive charging spot you’ll want to use for your phone. 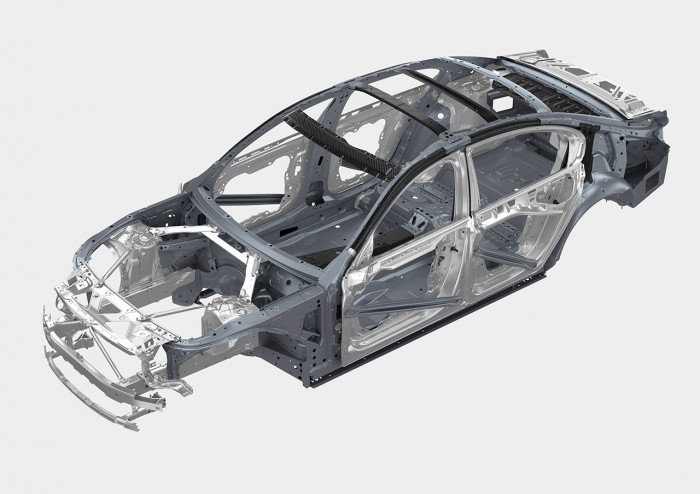 There’s a third leg to the stool with the 2016 7 Series. As much as BMW set out to define the car by technology and luxury, there’s also been a focus on increasing the level of athleticism of the car. That point was driven home when a BMW representative told me that “we don’t make cars for people who don’t like to drive.” With that positioning BMW is maintaining its place in the market as the maker of luxury sport sedans rather than couches on wheels. And the effort BMW put into this goes way beyond Laser Lighting or massaging seats.

Leveraging the learnings of the i3 and i8 projects, BMW engineers set out to build the new 7 Series out of a myriad of materials in order to reduce weight while dramatically increasing the standard and optional equipment and safety measures. This foundational design choice shed almost 200 lbs on the US spec car allowing for a car that is (on paper) more nimble and dramatically quicker than any 7 Series before it. In case of the 750i with xDrive that means 0-60 takes only 4.3 seconds. To put that in perspective that’s as fast as the E92 M3 and faster than the 1M. More importantly that’s a full half second faster than the Mercedes S550.

BMW’s goal in designing the car was to always use the right material in the right place. That meant a carbon fiber based core with aluminum at both ends and plenty of high strength steel for crash safety. The use of carbon fiber was particularly important in reducing weight as it’s 30% lighter than aluminum and a full 50% lighter than steel. 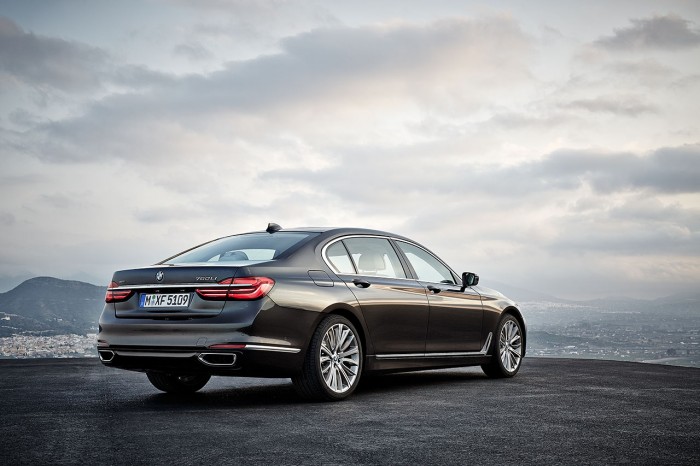 The attention to detail also extends to the exterior design. The Hofmeister kink for instance is now a single piece of aluminum (a first for BMW) to create a seamless look. There’s also much more detail within the design to better differentiate sport or luxury options. And speaking of details those iconic kidney grills now have movable aero flap that allows for better aero or more engine cooling depending on the situation.

Safety is another area where BMW is using the 7 Series to debut a handful of features. For one the HUD is dramatically larger than before (75%) allowing for more information to be placed in the driver’s line of sight. As before there’s the frontal collision warning and automatic braking. But now BMW has enabled this feature at parking speeds which will save drivers from those embarrassing parking lot mishaps that no one here has ever experienced. In addition to that there’s also a killer 3D parking perspective feature that gives drivers a few of obstacles from any angle around the car. Basically if you hit something trying to park the new G02 7 Series you might want to reevaluate your life or at least your parking techniques. 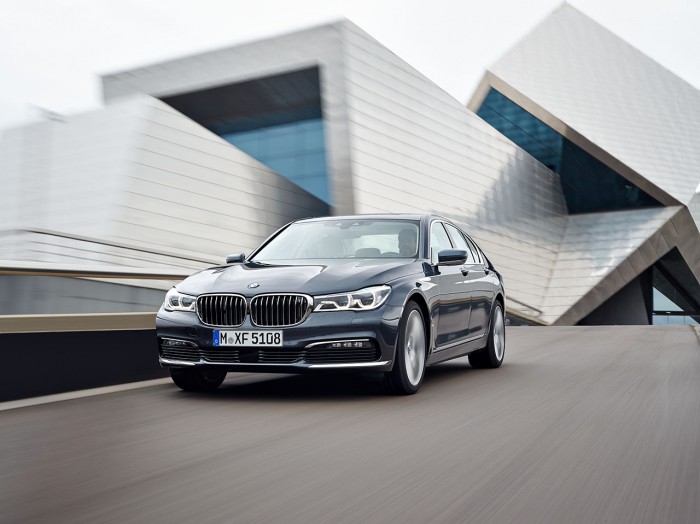 At highway speeds the 2016 7 Series features an active lane keeping assistant that will give you corrective steering if you drift out of your lane. Plainly put the car will tug you away from leaving your lane inadvertently. Using that same technology the new 7er will also tug you out of the way of cars that might drift into your lane.

The new G02 7 Series will debut at US dealers on October 24th in both 750i and 750iX form with prices to follow in the coming weeks. The six cylinder 740i and 740iX should hit dealers by spring with the 740e plug-in hybrid variant (with the same drivetrain we’ll see in the X5 eDrive) arriving around the same time. There has been no decision on diesel for the G02 in the US at this time. However given the low take rate we’d be surprised to see that option return. Instead BMW is likely to push the 740e as a more efficient alternative.

One final note. The G02 refers to the long wheel base 7 Series. The standard G01 won’t be coming to the US. Again low take rates are the blame. 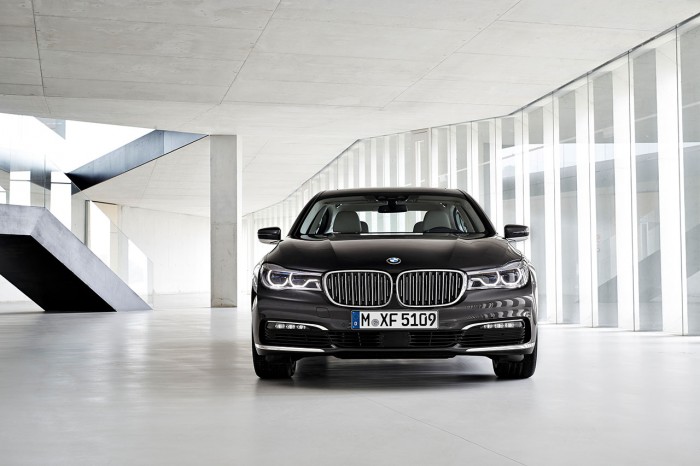