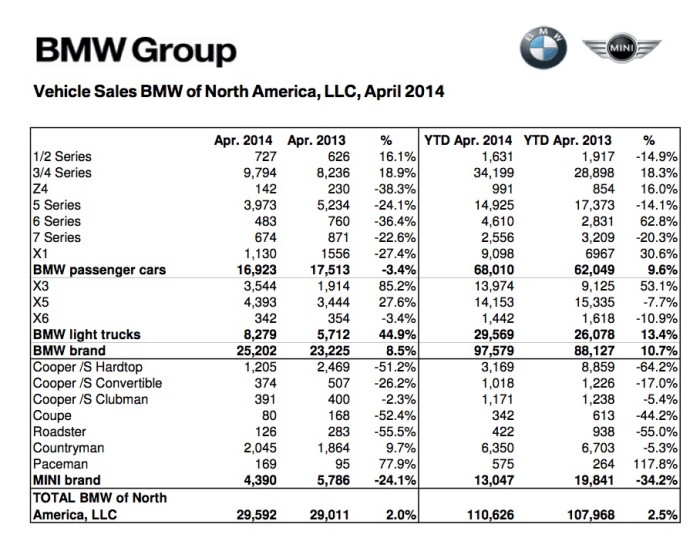 “April started and ended strong, which is not typical with spring break, holidays, and taxes due during the month,” said Ludwig Willisch, President and CEO, BMW of North America. “The increasing momentum including launch of new diesel models in the X3 and 7 Series and the first sales this month of the born-electric BMW i3 gives us considerable optimism for May and June.”

BMW Motorrad USA reported sales of 2,229 motorcycles in April, an all-time record performance for the brand, representing an increase of 41.9 percent from the total of 1,571 motorcycles sold in April 2013.

The three new-for-2014 boxer models helped drive growth of 87 percent in R-Series with the new R 1200 GS Adventure the top-selling model in the month with 297 retails. Strong contributions from the R 1200 RT and R 1200 GS (both with 208 units) resulted in 913 boxer deliveries in April compared to 487 this time last year.

A steady flow of port arrivals ensured the all-new S 1000 R reached dealers across the country and with 158 retails, the new 4-cylinder roadster helped S-Series performance to climb by 43 percent with a total of 417 retails compared to 292 in April of 2013.

With G-Series entry level models up 62 percent, maxi-scooter sales up 44 percent and middleweight F-Series models up 21 percent, total sales in April smashed the previous all-time record of 2,003 units set in February of 2003.

Worldwide BMW Sales Up 12% for October