The thinly veiled product version of the BMW X2 has arrived in “concept” form at the Paris Motorshow. As is typical for BMW, the term concept applies in the details of an car that will debut in production form in the months ahead. That means that yes, the production version will have door handles. It will also have standard looking black trim rather than the (oddly cheap) grey plastic that adorns the concept. What the two do share in common is a look that is decidedly more aggressive and (dare we say) interesting than the mechanically identical X1.

The BMW X2 will debut as a production model in early 2017 and should hit showrooms in the second half of the year. It will be priced as a premium to the X1 similar to how the 4 Series is priced above the 3 Series. 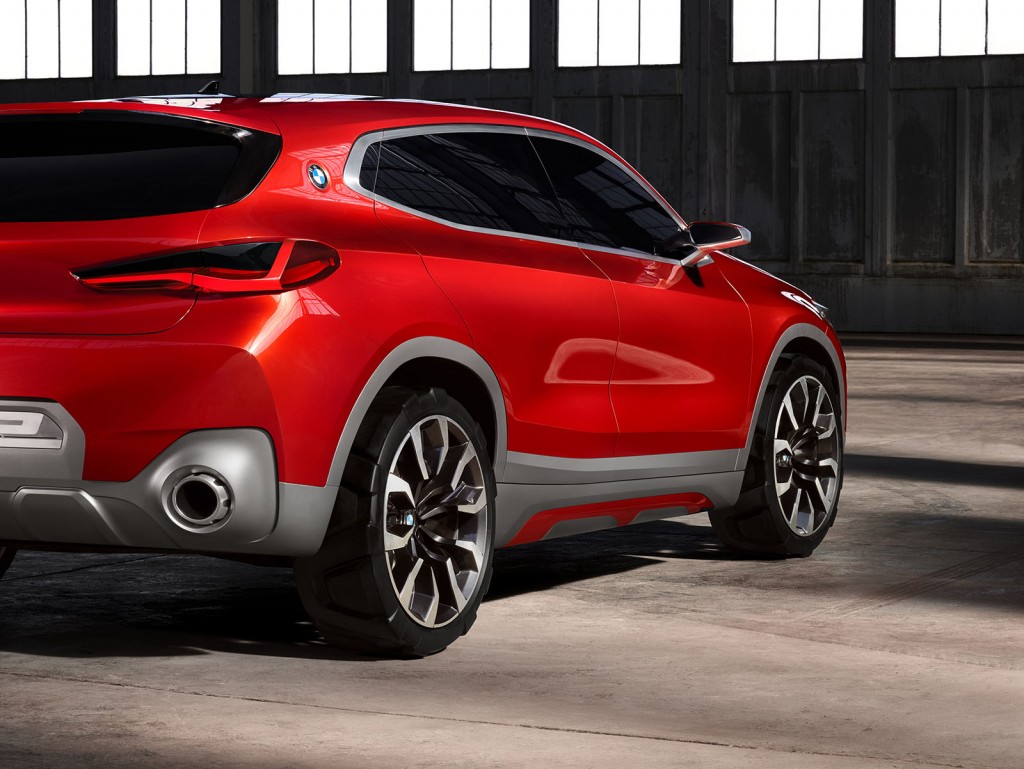 Official Release: The BMW Group has chosen the Paris Motor Show 2016 to present the BMW Concept X2. This new addition to the compact segment has a distinctive design that stands apart from that of the other X models and also draws on the BMW Group’s history of coupe-making. The result is a compact concept exuding urban sporting appeal.

“The BMW Concept X2 is a vehicle for active people looking for a combination of enjoyment and practicality,” explains Adrian van Hooydonk, Senior Vice President BMW Group Design. “The concept displays a new and exciting facet of the BMW brand within the compact segment.” 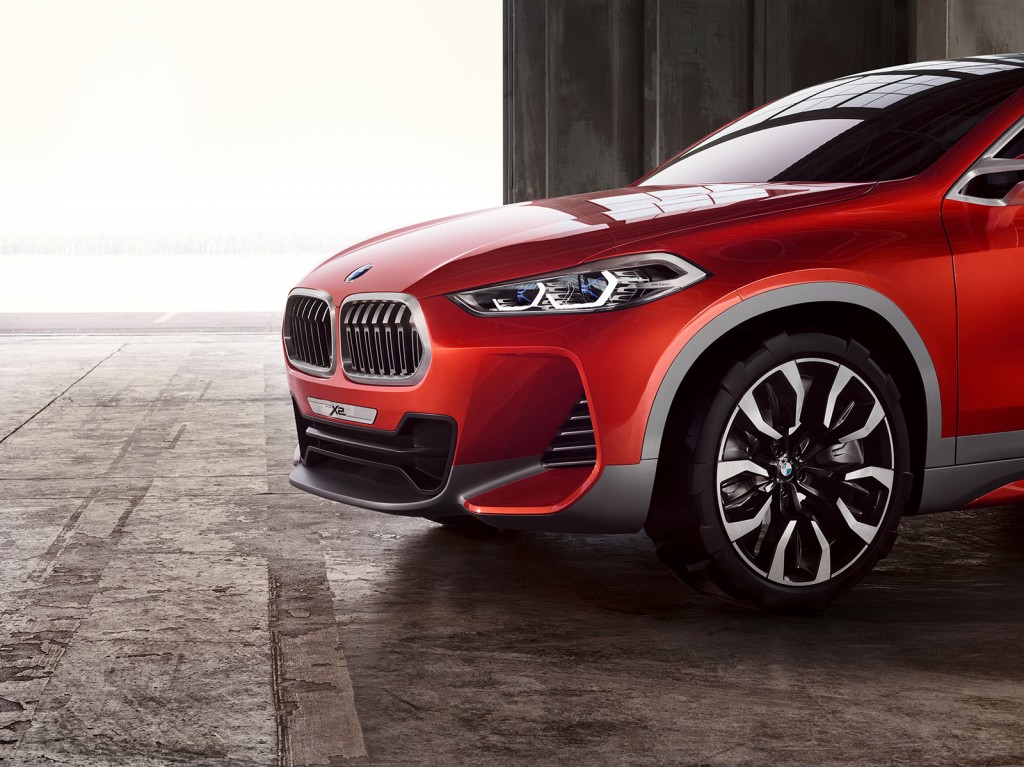 The design – a successful blend of dynamic appeal and solidity.

The design of the BMW Concept X2 fuses apparent contradictions into a single coherent statement. “The BMW Concept X2 combines the fast-moving body language and low-slung proportions of a coupe with the robust construction of an X model. This is a sporty vehicle with a bold character, and it allows us to open up some fascinating new design possibilities for the BMW brand,” says Karim Habib, Head of BMW Design.

The distinctive character of the BMW Concept X2 already shines through in the car’s proportions. While its large wheels and familiar two-box design underline its functional X model character, a long wheelbase, stretched roofline, short overhangs and heavily forward-slanting C-pillar give the body a sporty, low-to-the-road feel. The interplay of the darker cladding surfaces and striking Luminous Red body colour make the Concept X2 look even slimmer from the side. 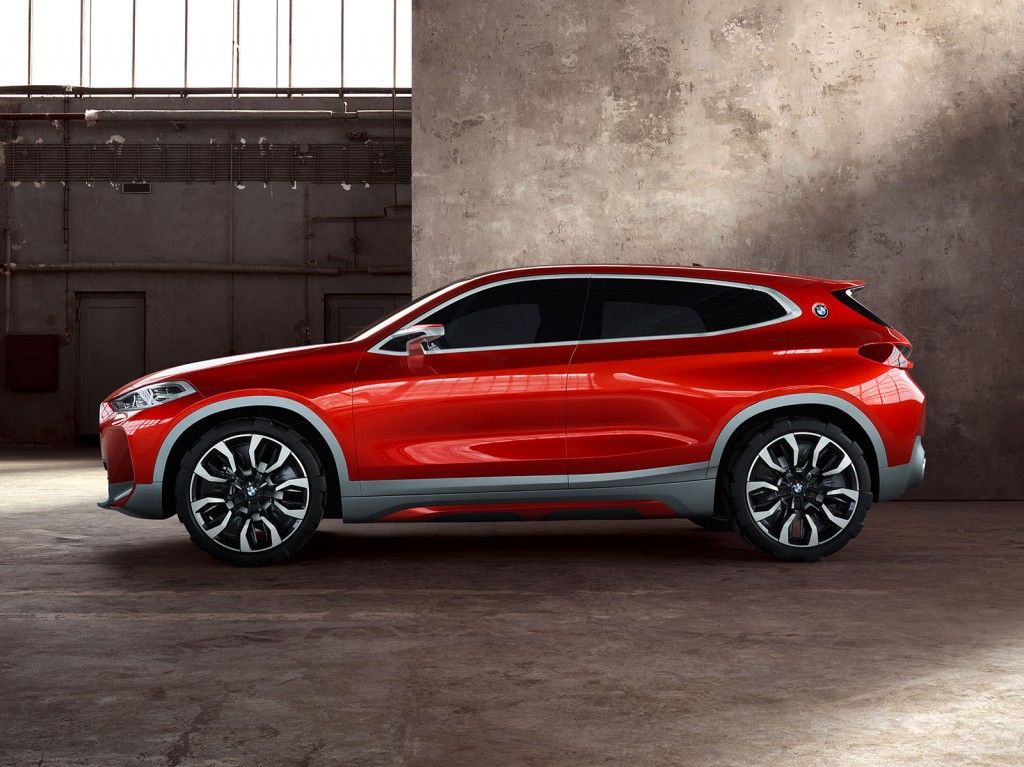 Two facets to a singular character – the side view.

The upper section of the car’s flanks is dominated by sporty design elements. The elongated roofline and slim window graphic create a stretched feel. The glasshouse tapers towards the rear, forming an athletic shoulder section. The window graphic surrounds and integrated two-piece mirror bases (both made from brushed aluminium) add an extra touch of class. The thickness of the aluminium profile plays a contrasting role here. The window graphic is rounded off by a dynamic interpretation of the hallmark BMW Hofmeister kink. Like the logo on the C-pillar – a classically sporty coupe design cue straight out of the BMW history books – this represents a singularly unmistakeable detail. The large, air-channelling roof spoiler in body colour lies flat over the blackened rear window. Extending from the C-pillars, it gives the rear of the BMW Concept X2 its sporty contours.

Lower down the sides of the car, customary X-model features hog the limelight. Muscular surfaces, large wheel arches and stylistic underfloor protection around the door sills form an intriguing contrast with the dynamic elements further up. Focusing for a moment on more detailed features, the surfaces of the car’s flanks bring together large, smoothly modelled sections with precise edges, showcasing the car’s athletic presence. The dramatic surfacing also emphasises the almost squared-off wheel arches familiar from the car’s BMW X stablemates. In them sit large, 21-inch light-alloy wheels, whose striking, double-spoke, bi-colour design with a strong sense of three-dimensionality continues the contrast between dynamic appeal and solidity into the car’s details. Tyres with chunky treads point to the potential for fun off the beaten track, while door sills in body colour with integral hexagonal elements set the seal on the robust appearance of the car’s sides at their lowest point. 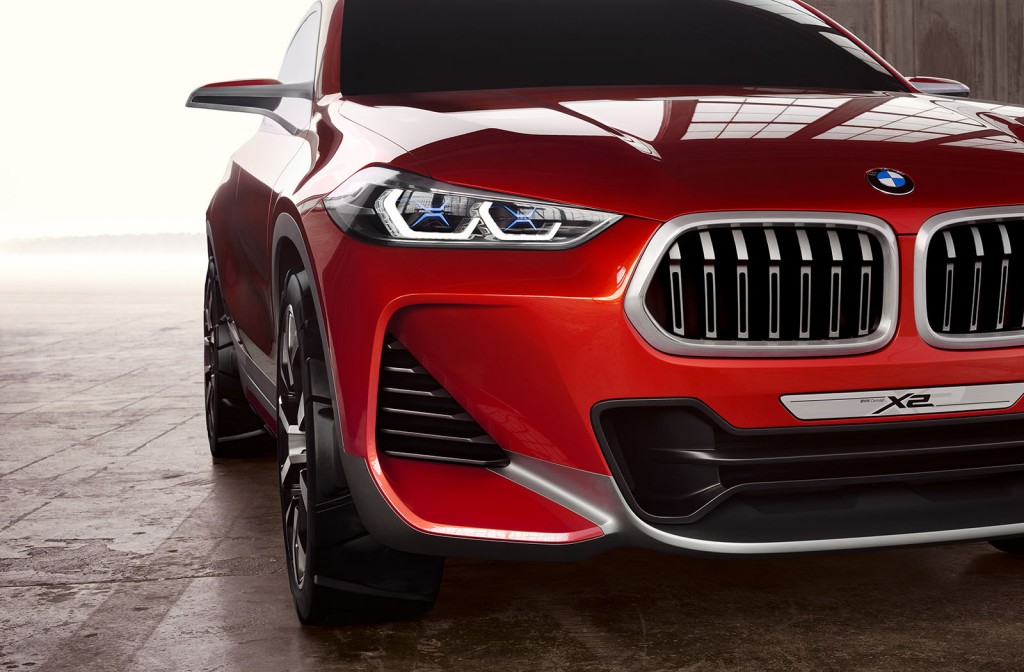 Dynamism and presence – the front end.

The front-end design of the BMW Concept X2 likewise fuses dynamic elements with a robust use of forms. Clearly contoured volumes and subtle edges create a front-end impression with presence and sporting appeal in abundance. The heavily raked windscreen appears to extend seamlessly into the dark panoramic roof and teams up with the newly interpreted double kidney grille and large air intakes to give the front end a slow-slung look. The kidneys are sited a little lower than the headlights, and the central air intake is closer to the road than the two outer intakes. This makes the centre of the car appear lower, underlining the dynamic verve of the front-end design.

The kidneys turn the familiar trapezoidal shape of BMW grilles on its head and instead widen from top to bottom. This clear statement therefore accentuates the standalone nature of the BMW Concept X2, as well as the width of the front and the car’s solid stance. Graphically modelled and heavily angled bars within the kidney grille create an undeniable “shark nose” effect, bringing additional depth and sculptural richness to this area of the car.

The flat contours of the headlight tubes help to give the classical BMW twin circular look a more hexagonal form. The laser light technology used by the headlights enables very slim light graphics, while the blue X in the centre of the hexagonal tubes adds a further technical accent.

The front apron is dominated by the large central air intake below the kidney grille, which helps to quench the Concept X2’s thirst for cooling air. The smaller, triangular air intakes on either side highlight the car’s broad stance. The robust, horizontal slats of the air intakes provide a solid counterpoint to the dynamic design of the front apron and add further detailed emphasis of the front-end’s traditional X-model character. 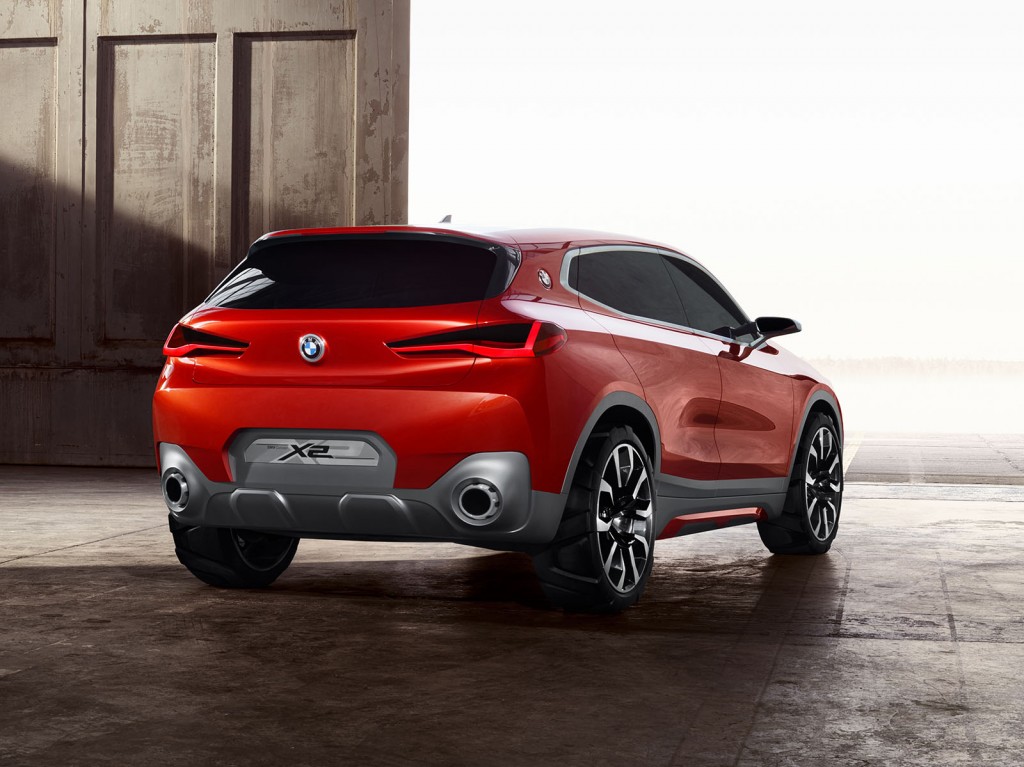 A powerful statement – the rear end.

The rear of the BMW Concept X2 rounds off the exterior design in distinctive style. Width-accentuating elements such as the slim rear window and horizontal lines reduce the perceived height of the BMW Concept X2 and underscore its sporting pretentions. From this angle you can also see how the rear window emerges elegantly from below the air-channelling spoiler and underlines the car’s sporting character. The prominent tapering of the glasshouse along the sides of the Concept X2 also catches the eye. It forms a powerful shoulder area, allowing it to highlight the car’s broad, muscular stance. Below the glasshouse, the sharply drawn rear lights radiate dynamic intent. The fresh interpretation of the lights’ familiar “L” shape frames the LED element as an illuminating three-dimensional sculpture that projects from the rear to eye-catching effect.

Located between the rear lights is the BMW logo. Below, the almost uninterrupted transition from tailgate to rear apron creates a cohesive overall picture which spotlights the car’s crisp surface language with particular clarity. The dark cladding below the rear apron lifts the whole rear end visually, while at the same time giving its upper section a slimmer look. The body-colour rear apron provides a dynamic flourish to round off the lower reaches of the rear. A large tailpipe at either outer extreme emphasises the car’s broad stance, while the surrounding surfaces reference the three-way split and overall form of the front air intakes.

BMW (Sorta) Confirms the X2 is Coming the US