Once the first-generation BMW M3 Pickup described above eventually started to show the first serious signs of wear after around a quarter of a century of service, it was time for a successor. As with the original, those responsible for its creation again opted for a convertible body due to the existing strengthening elements. “The conversion work had initially proceeded in the usual, largely unspectacular manner during the spring of 2011. But then someone came up with the idea of marketing the vehicle as an April Fools’ joke, as April 1 was just around the corner,” recounts Polschak. To prime the public, spy shots of calibration runs on the Nürburgring’s Nordschleife circuit emerged in the run-up to the day, which served to fuel speculation about plans to build a production model. 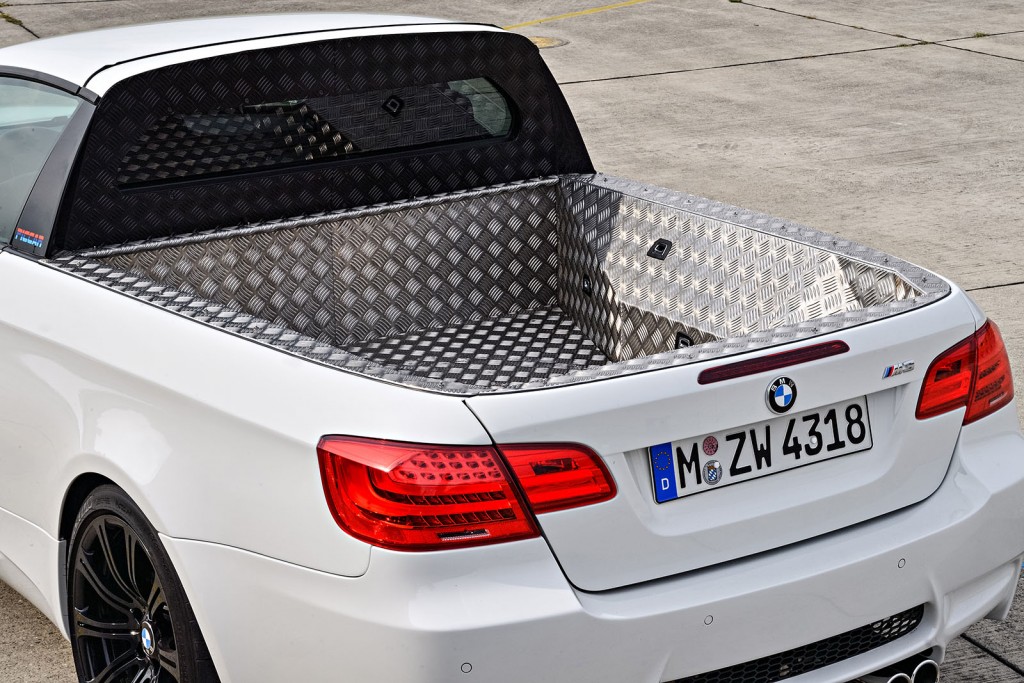 And it worked. Reports from the time show that a good many journalists and bloggers took the bait and believed the rumours. Even the official press release published on 1 April 2011 did not immediately set matters straight, first presenting the BMW M3 Pickup as the “fourth body variant” following the Sedan, Coupe and Convertible, before going on to say: “309 kW/420 hp under the bonnet and a payload capacity of 450 kilograms over the rear axle take the BMW M models’ hallmark blend of racing-style driving pleasure and everyday practicality to a whole new level.” It also pointed out that the Cd was only marginally higher than that of the BMW M3 Coupe, the car was 50 kilograms lighter than the Convertible and the 20-kilogram targa roof could be removed to further lower the centre of gravity and therefore deliver even sharper handling dynamics.

It wasn’t until the final paragraph that the press release discreetly revealed the model in question was actually a one-off built for use as a workshop transport vehicle. Unlike its predecessor, however, it had also been licensed for road use.

Could the M3 and M4 Return to 4 Cylinder Power?