The arms race for autonomous driving is reaching new heights at BMW. The BMW Group (BMW, MINI and Rolls Royce) have broken ground on the world’s most advanced facility for the simulation of real-world driving situations. The technology it will contain will support BMW’s efforts to create level 3 and 4 autonomy offerings as well as next generation in car digital experiences. 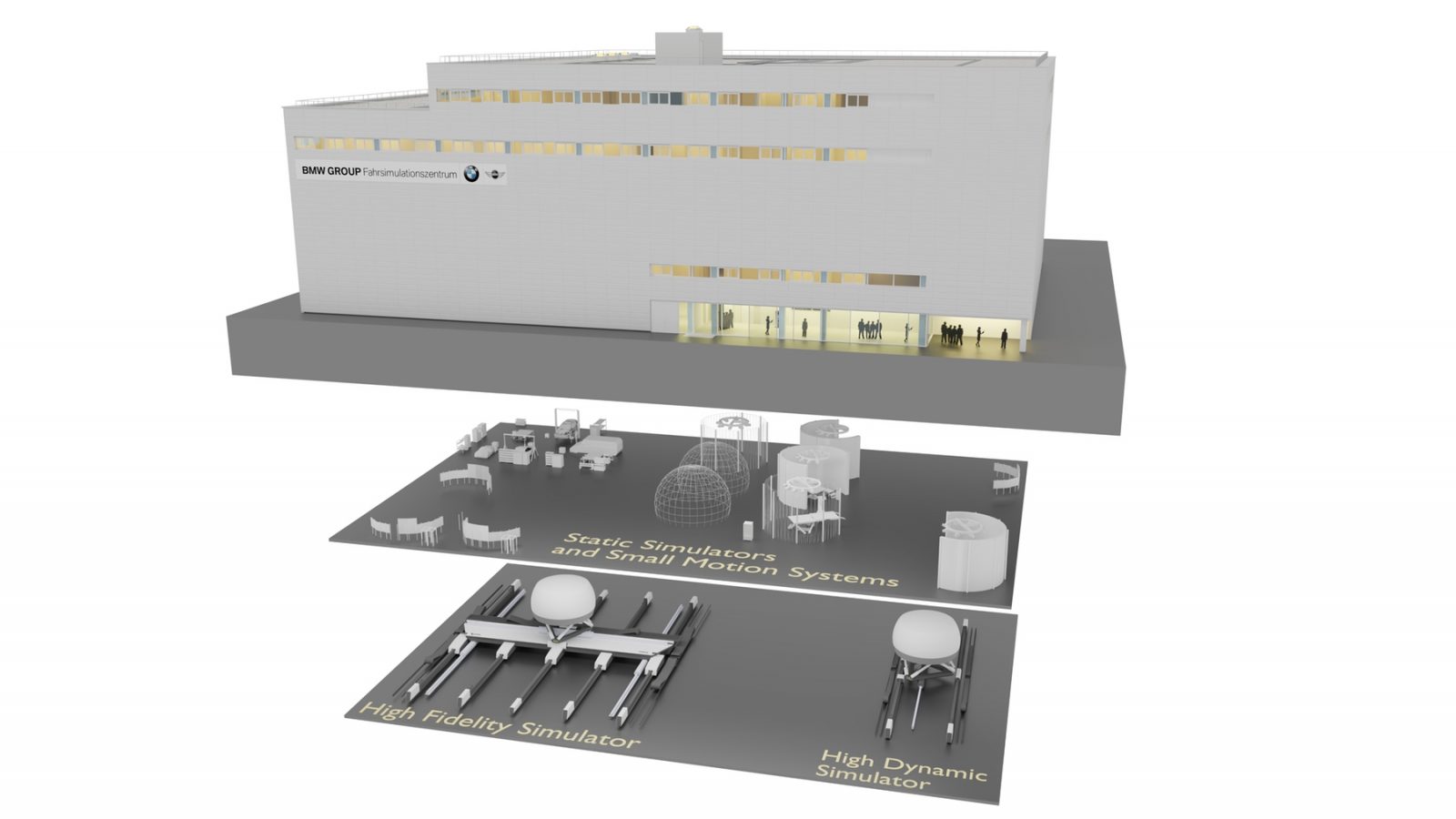 Official Release: The BMW Group’s new Driving Simulation Centre is taking shape in Munich’s Milbertshofen district. In mid-August, the company began construction of the world’s most advanced facility for the simulation of real-world driving situations at the FIZ Research and Innovation Centre in the north of the city. The new building provides unique possibilities for virtual testing of advanced driving assistance systems and innovative display and control concepts. This will, above all, strengthen the development expertise of the BMW Group in the field of autonomous driving. A unique feature of the facility is the high-fidelity simulator, in which longitudinal, transverse and rotational movements of a vehicle can be represented simultaneously and therefore very realistically. This allows the BMW engineers to “bring the road into the lab,” in order to conduct studies just as if they were taking place in real-world road traffic. For the first time, urban driving situations – which represent a particular challenge in the context of autonomous driving – can now also be reproduced realistically, allowing vehicle responses to be constantly enhanced.

New Driving Simulation Centre is an important component of the FIZ Future masterplan.

Automated driving is one of the main technology areas which the BMW Group has designated as being of central importance in its NUMBER ONE > NEXT corporate strategy. These areas are also addressed to a significant degree by the expansion of development capacity at the FIZ. Construction of the new Driving Simulation Centre is part of the FIZ Future masterplan, which calls for the BMW Group’s central development facility to grow by some 50 percent through several stages up to 2050. The foundation stone for the first phase was laid in autumn 2017 and now the start of work on the new Driving Simulation Centre marks a further stage in the project. It is being built in a central area between the Projekthaus and the Aerodynamic Test Centre. Covering a total floor area of 11,400 square metres, the facility will comprise 14 simulators and usability labs employing 157 people. BMW Group Research is planning to start work here in 2020. The investment in the new Driving Simulation Centre is estimated at around 100 million euros.

Several decades of experience in the field of driving simulation.

Advanced driving simulators have become an indispensable tool, especially for the development and testing of driving assistance systems and display and control concepts. They allow the functionality and suitability for customer use of new systems to be tested in detail while still at a very early stage of development. The driving simulator serves as a link between the functional testing of individual hardware and software components on the one hand and road testing with complete systems on the other. The BMW Group has many years of experience in using such facilities. Back in the early 1990s, static driving simulators were employed in the development of BMW cars. In order to model what happens on the road in even greater detail, the BMW Group has also operated a dynamic driving simulator since 2006. In the face of rising demands on the capacity of these facilities, a further dynamic driving simulator was installed in the BMW Group Research and Technology House in Garching in 2016.

At the heart of the new Driving Simulation Centre are two innovative driving simulators specifically designed to meet requirements for testing highly complex automated driving systems. The new high-dynamic simulator is able to generate longitudinal and transverse acceleration forces of up to 1.0 g. It is used to test new systems and functions by replicating highly dynamic evading manoeuvres, full braking and hard acceleration. An extremely detailed rendering of real-world driving characteristics is provided by the second unit, the high-fidelity simulator: braking and accelerating while cornering, driving in roundabouts and rapid series of multiple turn-off manoeuvres can be reproduced with high precision in this simulator’s almost 400-square-metre motion area. This means that, for the first time, complex urban driving situations – which present a particularly wide range of challenges for automated driving systems – can now be replicated under laboratory conditions.

The systems to be tested are fitted in a vehicle mock-up attached to a platform inside the dome of the driving simulator. Mounted on an electromechanical hexapod system, the dome can be moved both longitudinally and transversely by an electric drive while also being turned. In order to give the drivers a realistic visual experience of the simulated driving situation, the dome housing the mock-up is equipped with a projection screen. Precise synchronisation of the projected driving images with the movements of the vehicle creates a highly realistic perception of the simulated driving situation, in which the visual impressions of what is happening on the road and the longitudinal, transverse and vertical acceleration forces acting on the test person merge to create an almost flawless overall dynamic impression. The virtual test drive scenario is completed by a sound simulation which is also matched precisely to the situation portrayed.

In this way, it is possible to create test conditions which until now could only be experienced with real vehicles on the road. When seeking to optimise innovative systems, laboratory testing also has the advantage that selected driving situations can be repeated as often as required. This significantly increases the validity of the results. Furthermore, the driving simulator makes it possible to act out test scenarios which occur only rarely or under unusual circumstances in real life, or which would involve risks and so could not be created for test purposes in a real-world driving environment. Conversely, findings obtained in the course of real-world road testing can be checked and validated in realistic laboratory simulation.

The new Driving Simulation Centre is therefore ideally placed to meet the ever greater requirements arising from the growing complexity of systems for automated driving. In future, it will allow different driving situations to be reproduced in significantly greater numbers and in more detailed form. Individual aspects of a particular scenario can be varied and combined freely. This means, for example, that the configuration of a new driving assistance system can be tested under different conditions at an early stage in order to find the ideal balance between a dynamic and comfort-oriented profile before the first road test has taken place. New display and control systems can also be tested in a wide variety of situations in order to analyse the risk of the driver being distracted or the effect of visible, audible or haptic signals.

In order to establish both the functional reliability of new systems and their usability, the virtual test drives in the new Driving Simulation Centre will be conducted not only by the development engineers and professional test drivers, but also by customers on a regular basis. Analysis of their driving behaviour in the simulator and their own subsequent assessment provide important findings for the development process as it progresses. This means that, long before the first mile of actual road driving has been performed, the new Driving Simulation Centre is able to indicate clearly how well a new system will stand up to the everyday reality of a vehicle’s life on the road.