Today BMW M took the swirly wraps off of a new race car- The Vision Gran Turismo. While it is just a virtual race car designed for action in Gran Turismo 6, it may hint at future design cues and technology as BMW rarely shows a form of a concept publicly that does not have some correlation to the future (especially in “Vision” guise).

To mark the game’s 15th anniversary last year, Kazunori Yamauchi, Gran Turismo® creator and president of Polyphony Digital Inc., invited leading automobile manufacturers to contribute to the successful game series. Design departments were called upon to look into the future and share their ground-breaking concept models with the gaming community. “I was eagerly awaiting what kind of car the people at BMW would come up with. The resulting Vision GT car was a sports car that was so clearly BMW, that really shows the DNA of BMW,” said Yamauchi. 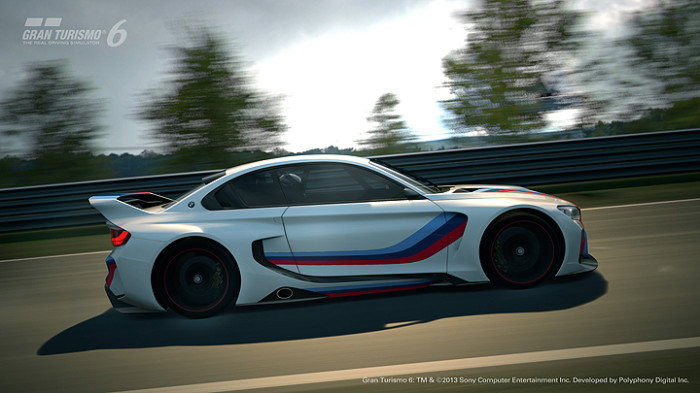 Following in the tradition of the successful BMW touring cars of the 1970s, the BMW design team has created an uncompromising road racer for the modern era. Crisp proportions and a dynamic silhouette give the BMW Vision Gran Turismo the appearance of speed, even standing still.

Front and rear spoilers ensure optimum down-force, while all air conduction elements reduce drag and lower the vehicle’s total weight through the use of carbon fibre.

The technology in the virtual BMW Vision Gran Turismo is just as impressive as its uncompromising design. A powerful virtual three-litre six-cylinder inline engine with M TwinPower Turbo technology developed by BMW M GmbH delivers a maximum power of 404 kW/549 hp between 6,200 min-1 and 7,300 min-1. Its peak torque of 680 Nm is developed at just 1,900 rpm. A sequential six-speed transmission, operated by gearshift paddles on the steering wheel, distributes engine power to the driven rear axle. The outstanding performance characteristics of the BMW Vision Gran Turismo, which weighs only 1,180 kilograms, include perfect 50:50 axle load distribution.

BMW to Debut Laser Light Headlights at the Nürburgring 24 Hours