Automobile Magazine took the two best recent M cars out to the central Carolina backroads recently to figure out which is the one to pine after. It’s an excellent piece that echoes a lot of our own conclusions. While it’s worth reading in full, we wanted to pull out a few of the highlights:

“The M2 looks like a scrawny kid that spent way too much time at the gym,” says racer and contributing writer Andy Pilgrim. “Same for the 1M,” I reply, “except its weight room is dangerously close to a nuclear power plant.”

Those bulges are almost shocking at some angles.

Pilgrim pops out of the 1M, a big grin on his face. “Edgy fun, this one. Glad I had my coffee,” he says. “No-nonsense interior, quick-shifting gearbox, and a really usable steering wheel with a small and ideal thickness, more like a race wheel.” He’s right. The M2’s fatter, wider helm feels less maneuverable working it side to side through tight switchbacks. 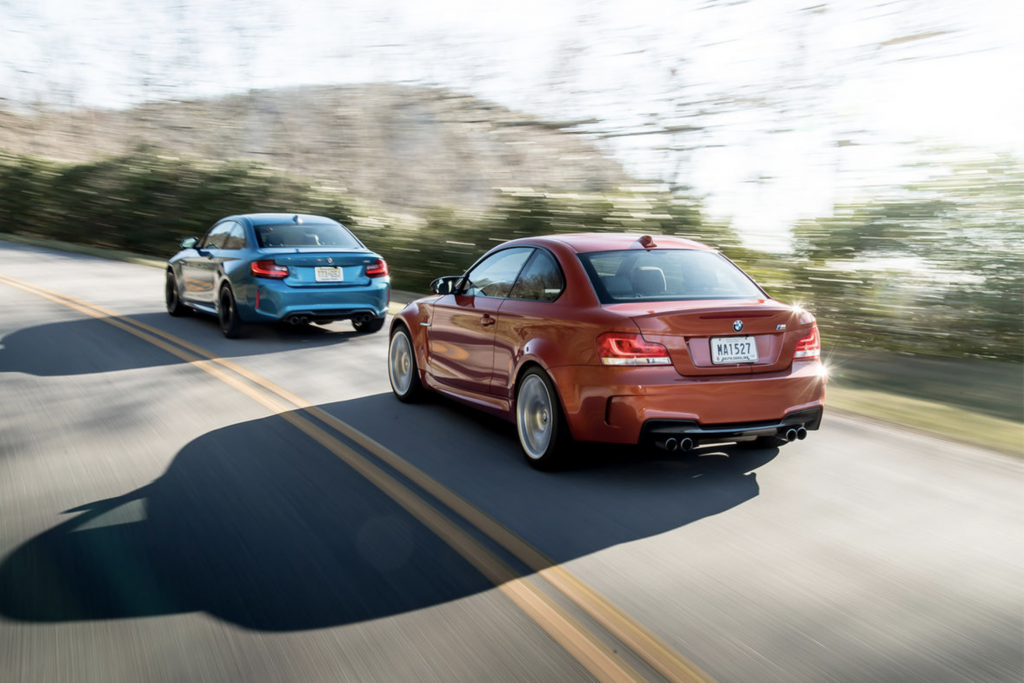 …We both agree the 1M is more prone to sudden oversteer under quick transitions, owing to its 1.3-inch shorter wheelbase and its mechanical rear differential. The M2, especially with its more modern traction- and stability-control systems, is simply an easier and more forgiving car to drive fast.

Having driven both in just about every scenario we 100% agree. The M2 is so predictable and easily controlled (even when you accidentally drift it in the corkscrew at Laguna). The 1M is a handful that you have to work at to tame.

“The thing with the 1M is that once the boost kicks in, you’re gonna need either fast hands or a plan,” Mullins advises. “Otherwise you’ll find yourself backward.” He’s a huge fan of the car, though, and confesses he and several other instructors harbored plans to buy one of the eight cars allotted for Performance Center use once their two-year service life was exhausted. “We kicked the crap out of those cars through 10,000 miles on each and 12 sets of brakes and six clutches for the whole bunch. We all thought we’d be able to get them on the cheap given what they’d been through, but they still sold for more than $50,000. Oh, well.”

Join the club. A lot of folks who had hoped to pick up a 1M for under $50k we’re pretty disappointed. 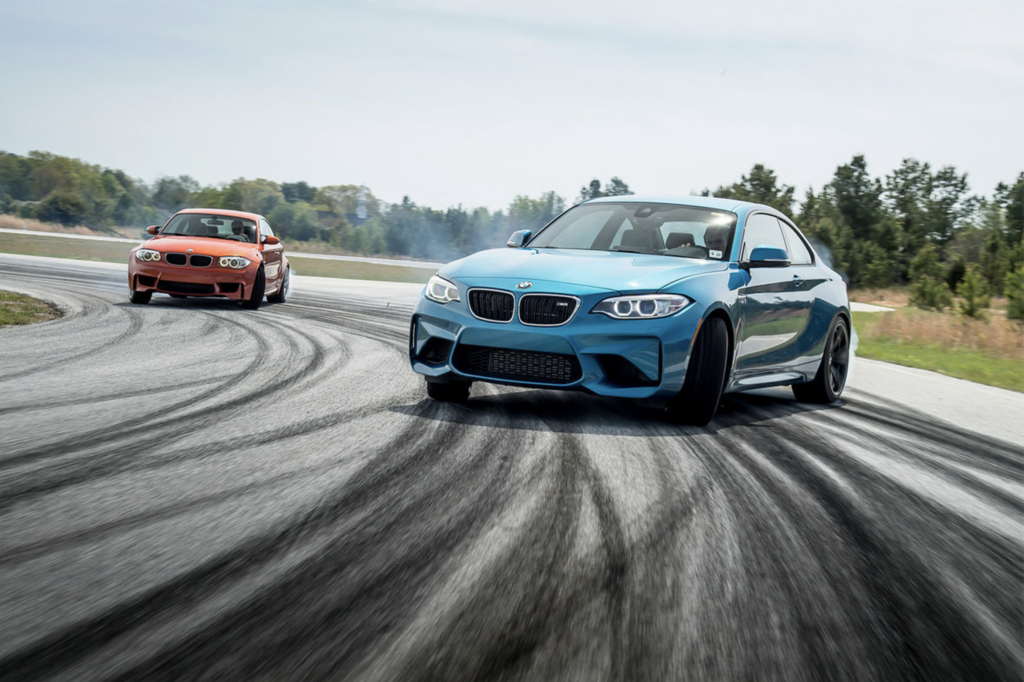 On the track, both Pilgrim and I can see why Mullins is still wistful about the M that got away. The 1M is about 210 pounds lighter than the M2. It shows. There’s an agility and nimbleness to the way it turns in and pivots, although the M2’s bigger footprint in general quells much of the former’s nervousness in high-speed corners. The M2 hardly needs more than ill will and a stab of the throttle to rotate, but it’s easier than the 1M to manage the chassis balance and power the car out of corners. “If you can tame it, though,” Pilgrim contends, “the 1M is faster coming off the corner.”

We found this very true as well. The 1M feels faster in many circumstances because of it’s quicker steering rack and more nimble nature. But…

For the sake of curiosity, Pilgrim ran both cars hard around the track. Each wore the same Michelin Pilot Super Sport tires, 245/35R-19 in the front and 265/35R-19 in the rear. All of us were somewhat surprised to discover the 1M was a mere 0.4 second off the pace of its successor: The M2 did the deed in 1:21.78, versus 1:22.22. “I give a lot of credit to the M2 for the win—civilized and track quick,” says Pilgrim. “Its extra power and poise, combined with its automatic transmission, gave it the edge.” It wouldn’t shock us to see the 1M even closer on the stopwatch at this track if it had a DCT like the M2 instead of a six-speed manual.

We’ve heard this before. The idea that the 1M, with a DCT, would be almost exactly as fast as the M2 on most tracks. Granted where its let down is the M2’s decidedly better rigidity and subsequent grip. Then again the 1M’s inability to always grip is part of it’s magic. And it’s relative rarity…

The 1M’s allure is undeniable, certainly in part because it is so hard to come by. BMW sold just 740 examples in the U.S. and only 220 in Canada during the car’s short run. The rear badge wears no number, just the letter M, as if that’s all that needs to be said. Seeing one in the flesh at all is a rarity and a delight.

But perhaps what we all appreciate most about that car is how, like a comet leaving a streak of gleaming dust in its wake, it blazed the trail for the M2, which considerably more customers will be able to enjoy — something that has not been mentioned enough by the enthusiast media.

Read Automobile’s full review
Source: here. Then head back in time and revisit ours.