The last article was about General Motors products. This article focuses on a more traditional competitor: Mercedes-Benz. I know, I know, this is a BMW site. While that’s true it’s always good to know what’s up with other car makers, especially the direct competition. And my, how BMW and MB compete. When I was younger, BMW was known for sport sedans with mid-level, but very usable power and precision handling that really made them the envy of the world. Mercedes-Benz was more known for Panzer-heavy luxury sedans that prized comfort over performance. You wanted driving engagement? Get the BMW. You wanted the ultimate in isolated comfort, you got the Mercedes.

But now, both have moved more to the other’s past strengths. As BMW has fought for more high-end customers, they realized (rightfully) that luxury was more than just putting a Blauplunkt cassette deck in the dash. As customers became more affluent, more was demanded and more was delivered. Weights started to climb and now car weight and bloat is a common refrain in criticism.

Computer-controlled fuel injection, and eventually turbocharging, made big power inevitable. Now we have 100 HP per liter being more a floor of modern motors, as opposed to an unobtainable goal (actually, when I was in auto shop in high school, 1 HP per cubic inch was the measure of a “hot” engine. That’s only 61 HP per liter.) So now big power is expected in the upper crust of automobiles. The end result is that BMWs are now heavier and more powerful that when the 2002 was released, and the early 3 series performance models that are the stuff of legend are eclipsed by the performance of cars like the 340i, a mid-level offering.

AMG started in 1967 as an independent company making racing versions of mostly the 300E sedan. It’s first class victory was in 1971, taking a class victory (2nd place overall) in a 24-hour race in Spa, Belgium. Order increased and the reputation grew. But here in the US, we didn’t get to sample AMG-modified cars anywhere other than car magazines (or the grey import market) until 1995 when the C36 AMG was first sold State-side. This car had a 6 cylinder motor sporting 282 HP. This was the first jointly developed car between AMG and Mercedes. 1,000 units total were made. In 2002, the release of the SL55 AMG signaled the full penetration of AMG into Mercedes-Benz, as every model MB made was available in an AMG version. This was a very short 14 years ago. Now the US is AMG’s largest market, with somewhere around 40% of all AMGs sold here. Now, in 2016, BMW and Mercedes-Benz battle it out for the top-of-the-hill in German luxury and performance, with the sales crown going back and forth over the years.

The two cars reviewed here represent some of the best that AMG has to offer. The C63 S AMG Sedan is a M3 direct competitor. (And the C63 S AMG Coupe that targets the M4 is due shortly.)The GT S AMG doesn’t really have a direct BMW sparring partner, but surely does compete for the dollars in customers wallets. The are both very capable vehicles. I didn’t find much to fault in either. 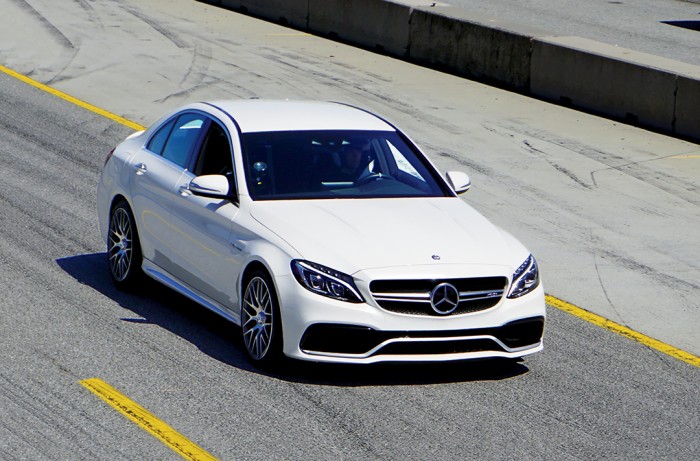 Mercedes-Benz C63 S AMG Sedan: This is one of the few cars at the event that is a direct BMW competitor. Too bad the M3 wasn’t here for a direct comparison (But the M2 was, there will be a post on that one in a bit.) What can I say? The C63 a blast to drive. Not quite as laser-like as the M3 it’s still shockingly capable. And I don’t know how MB does it, but the exhaust note is still amazing, despite the fact that the V8 is smaller and turbocharged than the NA monster it replaced. While not the booming bass of the last of the AMG 63s, it’s 95% of the sound, more of the torque, and much better gas mileage. Mercedes Benz vs BMW is the European Chevy vs Ford. But the C63 is an awesome car, no doubt about it. I wouldn’t be surprised if some BMW owners had switched teams to own this. Grade: A 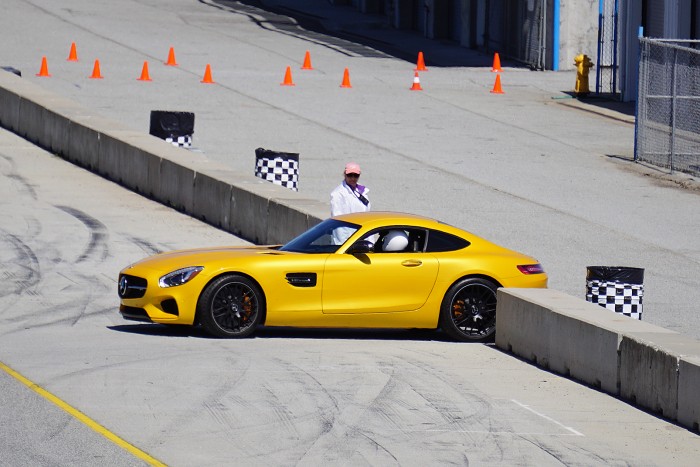 Mercedes-Benz AMG GT S: Holy Crap this car is fast! I hit a new personal top speed at MRLS of 111 MPH cresting turn one at the end of the straight in this car. I may have gone faster in a couple of cars like the GT-350R, but it didn’t have a safe way to check. For those of you that haven’t driven here, this is a slight left-hander that is also a crest of a hill, and if at the crest you lift too much, or turn too much, the car unloads and does very bad things at very high speeds. So I tend to keep my eyes on the road here. For those that are interested, the way through the turn is to pick your landmark (one of the power poles is what I used), keep pedal input constant, and wait until the suspension loads to do anything drastic. Turn 2, the Andretti hairpin, comes up really fast, so finding your brake point and scrubbing speed is next on the agenda. At events like these, brake points are early otherwise most of the stock brakes won’t make it through the day, and that sucks for other drivers (last year, the M3 had it’s brakes cooked before I got a chance to drive it at speed). This leads to early braking points, and means that there is less time between loading up and slowing down. (To put things in perspective, the Acura NSX was hitting 120 here under the control of a professional driver. Race speeds are higher still, but this is an “8/10ths event” so we’re supposed to conserve tires and brakes. I’m sure the Viper ACR was going faster, but I was too busy keeping my bowels in check and telling myself that I wasn’t going to die to look at the speedo.) 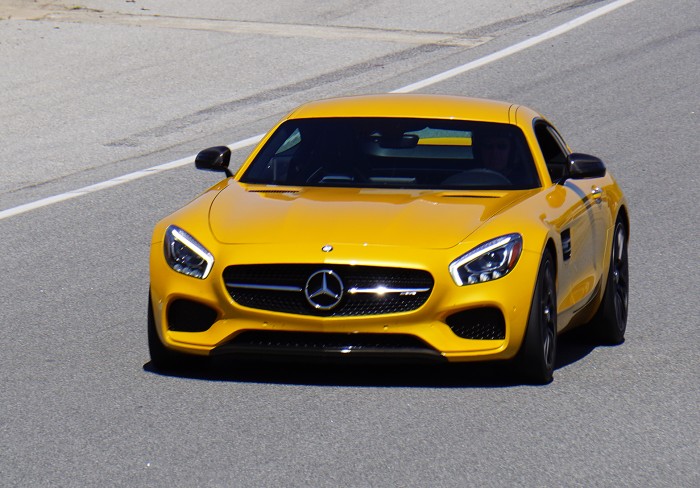 BMW doesn’t really offer a direct competitor to the AMG GT S. It’s more of a cross between a 911 and an M6 with the phallic hood of a classic Jaguar E-type thrown in for good measure. With a rearward seating position, one feels what the car is doing with one’s glutes. Any stepping out of the rear is felt in a different way than in a traditional sedan where one sits very close to the center of mass, and it’s a very direct way of knowing what the car is doing. My first lap out I felt a lot going on back there, as the previous driver wasn’t very good and the tires were pretty cold. As the heat in the rubber built, I had fun in this car much more so than the SLS I’d driven a couple years before. Yes, the SLS is capable, but there is this huge ridge down the center of the roof to support the gull wing doors, and every time my helmet hit it I enjoyed driving it less. (Something I’d never read in a review, but many other drivers nodded in a agreement when I brought it up in discussion.) I must admit that I liked this car much more than I thought I would. If totally impractical and shockingly capable are your buying criterion, keep the AMG GT S near the top of the list. Grade: A+

I guess it’s pretty obvious that the GT was my favorite of the two. But opinions differ. Gary Anderson, the Executive-Editor of the Star Magazine who took these amazing photos and let me use them here likes the C63 more. (Thanks for the pics, Gary!) The GT uses a trans-axle in the back that can’t take as much torque as the more conventionally located transmission/differential set up used in the C63 so the engine tuning is different. This means the C63 has more low-end torque than the GT. Gary used to vintage race and is much more skilled a driver than I am, so I don’t doubt that he can use the difference. Me, I went faster in the GT than the C63, and I think it’s just a better looking more unique ride. Different strokes for different folks. It’s all good, though!

Oddly, I didn’t get any seat time in either on the street, and the SL400 that was available for street driving only was always out when I was in to select a different car. That’s too bad, as three years ago, the SL550 was a very pleasurable ride. Last year the M6 Cabriolet was available. It seemed to me to be one of the very best of GTs available at any price. I’d thought something similar the year before when I went off the reservation in the SL550 (skipping lunch to take more time to enjoy the car without impacting other drivers). I’d hoped to try the new SL400 to sample the boosted V6, but sadly, it wasn’t to be.

Overall, Mercedes Benz is doing very well. This year, here in the US, it is out selling BMWs by a sizeable amount. The have a greater variety of cars, despite BMWs never ending tendency for micro-differentiation among models, and they have a greater variety of SUVs that the US buying public always seems to crave. Last year went to BMW by a nose in US sales. This year, Mercedes Benz will surely take the crown. After driving these two cars, I can see why.

by Matt
BMWCCA EfficientDynamics In the Press Opinion Reviews

by Michael
In the Press Opinion

The Meaning Behind A Premium Brand Acquisition Rumor