BMW sales in North America rose 0.7% in September compared to the same month last year. While this is a bit of growth, it’s a bit less compelling when one looks deeper into the numbers. First off, there were 26 sales days in September 2017, and only 25 in 2016. That extra day right there should be about a 4% increase if the daily sales rate were unchanged. Overall US Light Vehicle sales were up 6.3% for the month, so BMW was far from leading the pack. If we look at Matt’s Luxury Index, the only silver lining is that BMW wasn’t the worst performer: that honor goes to Mercedes-Benz that dropped 1.2%. But overall, the MLI was up 5.9% for the month, only slightly trailing the overall US Light Vehicle Fleet. 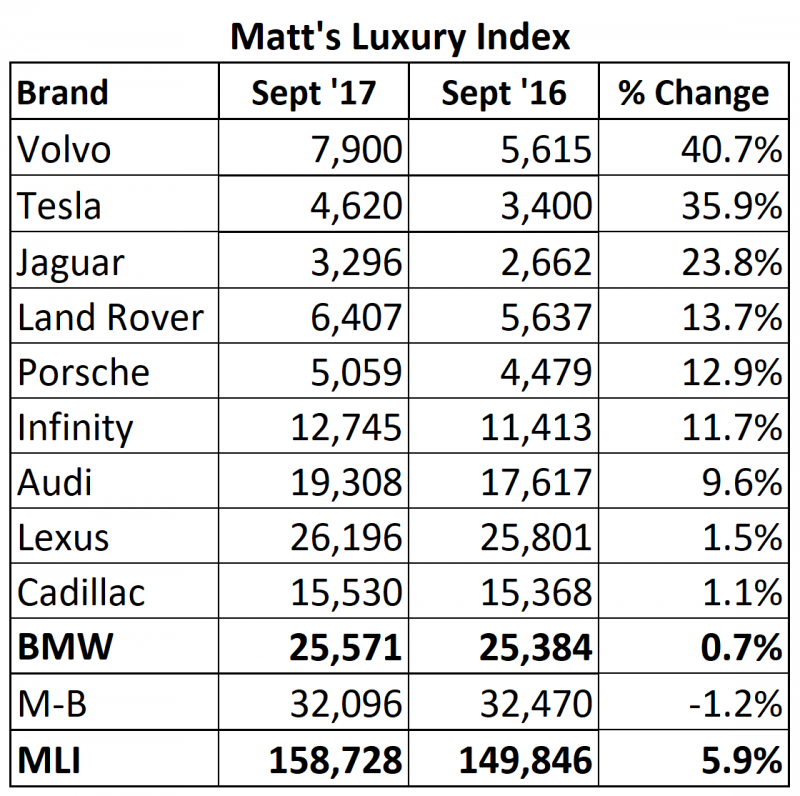 The market as a whole is generally bullish. Many of the Automotive fortune tellers chalk it up to the strong US economy. Interest rates are still low, gas is still pretty cheap. Replacement sales for the two hurricanes also contributed to a strong month. But all this rosy spin is countered by two worrisome items: Incentive spending is up, and inventory is up as well. While incentives aren’t reported, both firms that track and estimate incentives per car have them a bit shy of $4,000 per sale. Inventory is reported, the average car now spends 80 days on a dealer lot. 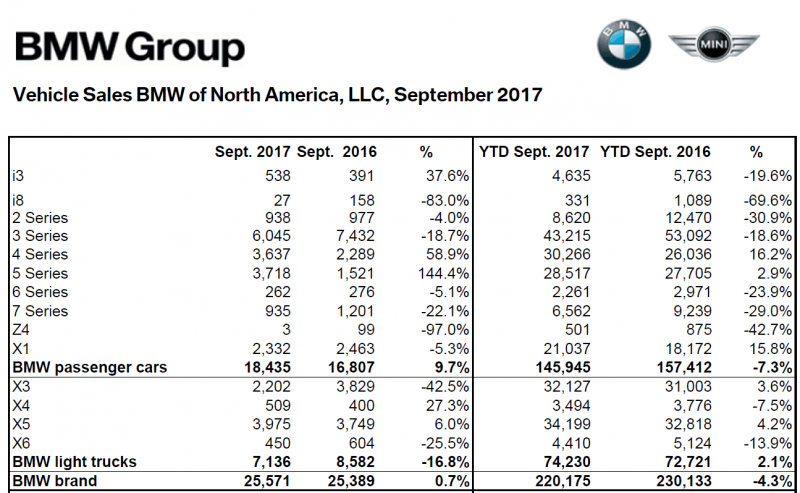 The text of this months release from is a bit too optimistic to our ears. Bernhard Kuhnt, President and CEO, BMW of North America delivers the “Just wait, We’ll Do Better Soon” monthly line claiming that increased capacity in Spartanburg and the new X3 will make it all OK. While globally BMW is doing well, the North American market seems to have the company very, very confused.

The hot summer has given way to autumn and an uptick in sales, fueled in part by continued strong demand for the new 5 Series, as well as demand in Texas and Florida where customers are now replacing their flood and hurricane damaged vehicles, said Bernhard Kuhnt, President and CEO, BMW of North America. We are also anticipating growth in our Sports Activity Vehicles as expansion at our X model plant in South Carolina means we’ll have more X5s this month followed by the eagerly awaited introduction of the all-new X3 in November.
BMW Group Sales
In total, the BMW Group in the U.S. (BMW and MINI combined) reported September sales of 29,307 vehicles, a decrease of 0.4 percent from the 29,413 vehicles sold in the same month a year ago. Year-to-date, BMW Group sales are down 5.2 percent on sales of 254,962 vehicles in the first nine months of 2017 compared to 269,044 in the same period in 2016.
BMW Group Electrified Vehicle Sales
Sales of BMW Group electric and plug-in hybrid electric vehicles increased 14.9 percent to 13,533 through September 2017 (YTD), accounting for 5.3 percent of total BMW Group sales in the U.S. Currently, BMW offers six electrified vehicle models in the U.S., including the BMW i3 and BMW i8, as well as the BMW i Performance models: BMW 330e, BMW 530e, BMW 740e and the BMW X5 xDrive 40e. MINI offers the MINI Countryman plug-inhybrid electric vehicle, which launched in June 2017.
BMW Pre-Owned Vehicles
FacebookTwitterPinterestLinkedinRedditMixEmail
//M Performance //M2 F26 X4 NAIAS Official News